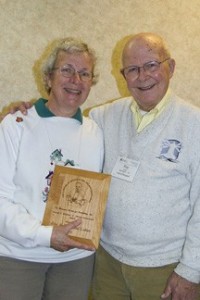 On May 22, the Wisconsin Society for Ornithology (WSO) honored Roy and Charlotte Lukes with the Samuel D. Robbins Lifetime Achievement Award. The Lukes have been invaluable in assisting WSO with its mission – “Promoting the enjoyment, study, and conservation of Wisconsin’s birds.”

Tom Erdman, 1981 WSO Board president and curator of the Richter Museum of Natural History in Green Bay, began his bird- banding career with Lukes. He names Roy as his mentor, and has this to say about the couple, “They’ve meshed well. They’ve worked hard. They’ve protected the good things, and because of their work the good things are still here.”

Roy’s dedication to WSO began when he became a member in 1958. He assumed the vice president position in 1973 and served as President in 1974. His WSO activities include, many of which also involved Charlotte: conducting Christmas bird counts, summer bird counts, field notes observations, and a seasonal reports contributor. He also authored several Passenger Pigeon articles and contributed photos for its stories and the cover. From 1962-1974 he was manager of the WSO Supply Department. In 1983, he was co-chair of the WSO convention. Roy and Charlotte were the Door County coordinators for the first Breeding Bird Atlas of Wisconsin, published in 2006. Charlotte also helped organize the annual Spring Bird Watch for Door County and began the Autumn Bird Watch for Door County in 2001. She also assisted in producing a Door County checklist of birds for avid birders to track the species they’ve seen while in Door County.

Together over the years, in addition to the Samuel D. Robbins Lifetime Achievement Award, they have received nearly 30 awards for their dedication to conservation and the community.