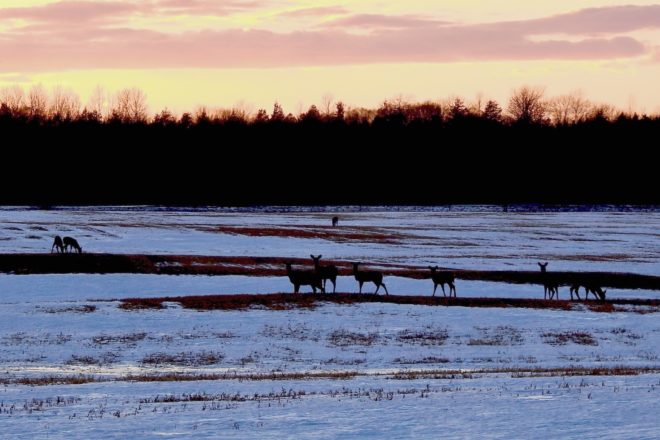 A spring thaw has attracted hungry deer to farm fields this week. Photo by Kevin Naze.

Whitetails caught a break in the past week after a timely meltdown that exposed farm and country fields, allowing easier access to woodland browse. Longtime deer hunter Dick Baudhuin said there’s still a problem, though: too many whitetails for too many years have nearly eaten themselves out of house and home.

“We didn’t see many deer in the thermal cover this winter, and it’s not because it wasn’t cold,” Baudhuin said. “They were in survival mode in small woodlots and in people’s yards, looking for something to eat. Deer don’t want to be eating from bird feeders near people’s homes, but they don’t want to starve either.”

Baudhuin, who chairs the Door County Deer Advisory Council (CDAC) but doesn’t have a vote, said the group’s three-year objective to decrease the herd still stands.

“There are still too many deer,” Baudhuin said. “It’s better for a hunter to reduce the herd and utilize the meat than for that animal to suffer in a winter like we had this year.”

Even though the Door CDAC is recommending a drop in the antlerless quota, the numbers – 6,500 antlerless last year and 4,500 this year – haven’t been achieved in recent years and likely still won’t be. Even after some pushback, five free antlerless tags with each license purchased is still on the Door table.

Though many hunters are content to shoot one or two deer per season, Baudhuin said at least offering the five free tags is an opportunity for hunters in areas with too many deer to reduce the herd. If they don’t want that much venison, there’s always the food-pantry deer-donation program, he said.

After trying an extended archery and crossbow season (until Jan. 31) for the first time, the Door CDAC heard from enough hunters that it decided not to recommend it for 2019.

There’s no option for splitting the unit north and south this year: when it came up for a vote last year, it didn’t pass.

Door hunters can weigh in on the recommendations online during a public-comment period April 1-10, or in person at the April 16 meeting, 7 pm, at the Door County Courthouse. Learn more at dnr.wi.gov/topic/hunt/cdac.html.

Kewaunee County’s Deer Advisory Council wasn’t expected to stray from its “maintain the population” recommendation for 2018-20 when it met for the first time Wednesday night.

Like Door County’s hunters, Kewaunee County hunters can weigh in on any proposals by reviewing the CDAC site later this month and filling out an online public-comment form between April 1 and 10. Kewaunee County’s final recommendation meeting will be April 17, 7 pm, at the Muskrat City Sportsman’s Club.

Kewaunee County hunters did not participate in the late archery hunt last year, and the fact that Door dropped it likely didn’t change their opinion. Both counties were in the holiday gun antlerless hunt last year, but there has been some online pushback that by eliminating it, hunters would just shift their antlerless take to earlier seasons.

What’s your opinion? Fill out the online form early next month.

Join the Birdathon
The Great Wisconsin Birdathon (wibirdathon.dojiggy.com) – a joint effort of the Natural Resources Foundation of Wisconsin and the Wisconsin Bird Conservation Initiative – is taking place April 15 through June 15. And it’s growing: It has raised more than $400,000 to support priority bird-conservation projects in Wisconsin since 2012, including more than $88,000 last year.

The Birdathon is for everyone: individuals, friends and families, classes and clubs. You gather a team to count birds for a morning or as long as 24 hours, any day from April 15 to June 15, anywhere in Wisconsin. This year’s goal is $90,000 or more through team donations, sponsorships and Bird Protection Fund field trips.

Record “grows”
The biggest hunter-recovered buck in the history of free-range whitetails was even bigger than the first measurement in January.

The buck is the third-largest all-time in the Boone & Crockett record book. The only two larger were found dead in Missouri in 1981 and Ohio in 1940.

Illinois also boasts the world-record archery buck in the typical category: a 204 4/8-inch giant taken in 1965.

Turkey tags
All remaining spring wild-turkey hunting permits will go on sale March 23 at 10 am, with a limit of one per hunter per day. See what’s left by zone and time period at dnr.wi.gov/permits/springturkey.html.