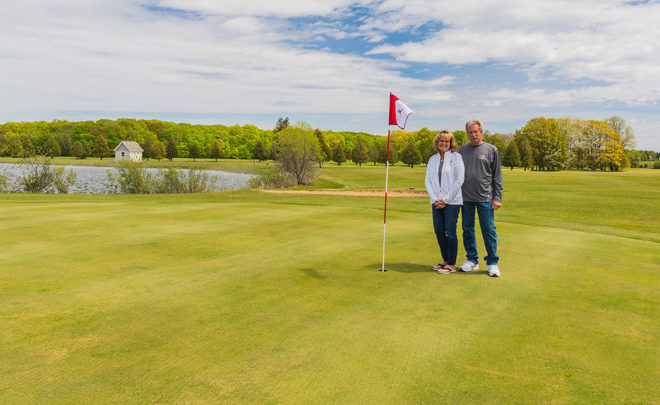 Trudy and Dan Schelitzche, owners of Deer Run Golf Course on Washington Island, are in charge of all the daily operations of the 45-acre course. Photos by Len Villano.

Like many things, golf courses exist on a wild spectrum.

The elements that make The Da Vinci Code a book — words that frame sentences that frame paragraphs — also make The Very Hungry Caterpillar a book.

Likewise, the elements that make Whistling Straits a golf course in Sheboygan — tee boxes that lead to fairways that lead to greens — also make The Orchards a golf course in Egg Harbor. Down on the far end of this spectrum, the same goes for Deer Run, a tiny, nine-hole track in the southwest corner of Door County’s top hat, Washington Island.

On the surface, there is a fully functioning, 2,700-yard, open-six-months-a-year golf course on an island that is home to 700 people. That sentence alone places Deer Run on one end of the golf course spectrum. However, to look at those last two qualifiers — a mildly populated island — and think anything less of this course would shamefully ignore its two most charming features: Dan and Trudy Schelitzche.

The Schelitzches have been married 40 years, and have owned Deer Run for the last 21. Together they make up the maintenance staff, bar staff, men’s league coordinators, pro shop attendants, mini golf supervisors, motel management, cleaning crew, cooking staff, grounds crew…are you impressed yet? Name another couple that manages an entire golf course on their own. 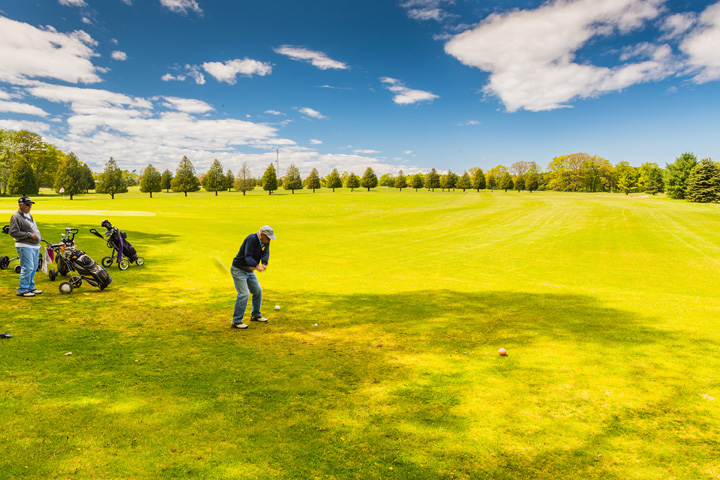 Dan orchestrates the green stuff, mowing the fairways on Thursdays and shaving the greens every morning. Trudy is in the shop, taking reservations, balancing the books, answering the phone and handling a number of jobs Dan is more than grateful for. “It’s harder dealing with people than it is keeping care of the golf course,” he said. And technically, it’s really a golf resort. The motel’s three rooms each look out over the 9th green, a grill and accompanying patio, and an 18-hole mini golf course for those who shyly avoid the big course.

As much as the restricted staff at Deer Run seems like a burden — especially for a couple in their 60s — it’s one of the chief reasons why Deer Run consistently makes money. With little to no wages to pay, the course actually makes a profit, and has for years. On Sundays, one other Islander mans the shop while the Schelitzches take in the Door County League baseball game or actually play the course themselves.

Sounds like they’ve got a pretty good thing going, huh? For Trudy and Dan, the outlook for their 40s, 50s and 60s was never about running a golf course, or even making money off of it.

Washington Island will do that for you, with its four or five main streets and everybody-knows-everybody social style. When the Schelitzches made the move from Victoria, Minnesota, just west of Minneapolis, one of the only things they didn’t have was any experience operating a golf course.

Thanks to Reinders, their initial fertilizer supplier from Appleton, Dan learned the basics of course agronomy. Thanks to the Wisconsin Professional Golfers’ Association Section, they learned about course design, adding in doglegs and revamping the bunkers. Eventually, they worked their way into adding a two-acre pond and installing a new irrigation system. Finally, thanks to that slower pace they so avidly desired, they learned how business would work.

“When we first bought it, we’d be open at six o’clock — you know — waiting for people to come,” Trudy said. “We’d take tee times. We soon learned that nobody on the island gets up until 10 o’clock, and nobody keeps their tee times.”

At least the locals don’t. Tourists might, if only because that’s actually the norm in off-island settings. This early lesson paints the ultimate picture of that laid-back Washington Island lifestyle. The all-important tee time, which governs the pace, order and consistency of every other golf course on the spectrum, is nonexistent at Deer Run. Show up with some clubs and some cash and you’ll be playing golf in no time.

“It’s laid-back. Nothing formal,” said Gary Ebert, a local who plays the course every single day. “We just show up at 1:30. If somebody else shows up, Trudy says, ‘Oh, you can play at 1:30, but there’s a big group coming. You might want to go out before they do’.” 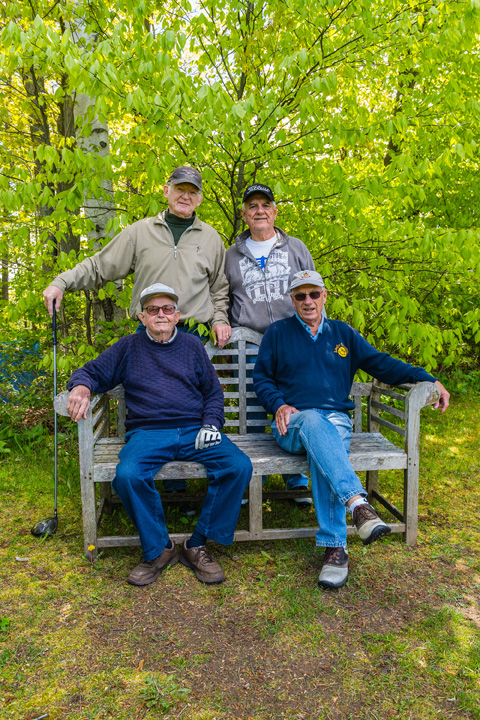 Deer Run sees a healthy mix of visitors and islanders on their summer tee sheet. Gary Ebert, pictured bottom right, and his “golfing gang” are regulars who try to golf there daily.

That group is Ebert and his golfing gang. They all try to play every single day. Sometimes that gang is as many as 12 players. Other days it’s just him, but every time, it’s 1:30…ish. If that works for them, then it works for the Schelitzches.

Now, 21 years into Golf Course Management 101, the Deer Run they created is a well-oiled machine. On a busy summer day, the course will see more than 100 golfers — maybe even 200 — according to Trudy’s estimate. The summer tee sheet tends to include only 50 percent locals, so the influence of the island’s stout tourism industry is vital for the course’s survival. Almost as much as its owners.

“My husband is 66 now and we’re both ready to retire,” Trudy said, well aware of how difficult selling a golf course can be, especially one on an island. “We’ll still come here in the summer, we’re just ready to not work every day.”

That’s because Dan and Trudy own a “winter home,” all the way down in Madison, Wisconsin. When they close the course down each October, they head south to be closer to their two children and grandson (a granddaughter is on the way). That’s something they’d like to do during the summer as well.

Forty-five acres of land on Washington Island (near the ferry, no less!) could be sold for all kinds of purposes. A realtor’s imagination blooms at the idea. The Schelitzches’ lot is currently listed at $799,000, in case you’re well endowed and so inclined. There’s just one thing:  you must also have the right intention.

The Schelitzches have been approached by potential buyers in the past. Some are interested in the course, others in the motel and buildings. Some even hold dreams of creating an expansive housing development. “I told my wife,” Dan said. “I’m not even interested in talking to those people.”

These are the people Dan sees at his course every day. Or rather, these are the people Dan sees at his home every day. He’d never sell to someone uninterested in keeping Deer Run a fully functioning, 2,700-yard golf course on an island of 700 people. Remember, this is the guy who, along with his wife, quit the corporate world 21 years ago and changed his lifestyle to fit a course they had just named Deer Run. So here he is, 66-years-old, firing up the mower six or seven days a week, giving the course a fresh manicure for maybe the 4,000th time. All of it for one simple belief he learned early on in his days on Door County’s top hat.

“The island needs a golf course,” he said. “Even if it’s just nine holes.”