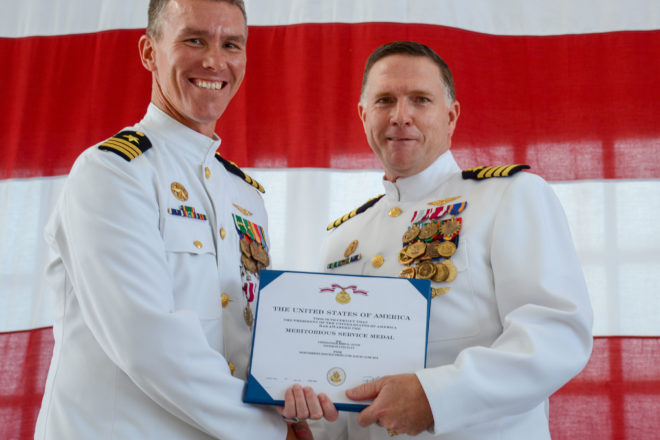 LeVoy was born and raised primarily in Chicago, but he spent part
of his youth in Sister Bay. His parents, Hugh and Lee LeVoy,
have been property owners in Door County for 40 years and
moved permanently to their home in Ellison Bay in 2001.
VUP-19 is a U.S. Navy squadron responsible for flying MQ-4C
Triton unmanned aerial vehicles. Both the squadron and the MQ-
4C Triton are new to the Navy, representing a technological leap
for naval aviation. Triton aircraft boast a wingspan longer than
that of a 737 commercial plane, 24-hour endurance, and a suite of
highly advanced surveillance sensors. The aircraft, controlled by
satellite signals, can be flown anywhere in the world.

During the past year, LeVoy led VUP-19 through groundbreaking
first steps in the MQ-4C Triton program, preparing the squadron
for a permanent deployment to the Pacific region, where its
members will fly missions supporting U.S. 7th Fleet operations.
In his speech during the ceremony, LeVoy thanked many of his
role models for setting examples on which to build the nascent
squadron. These included his parents, several senior naval
officers, and John and Kathy Kenneavy, Sister Bay natives who
attended the ceremony. As the former owners of Kenneavy’s
Kitchen in Sister Bay, they employed LeVoy during several of his
teenage summers.