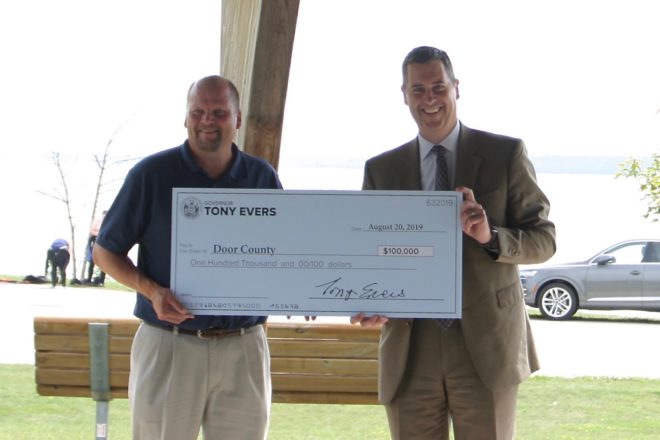 Department of Administration Secretary-designee Joel Brennan spent Aug. 20 in Door County to talk with county and municipal officials and Jim Schuessler of Door County Economic Development Corporation. In the afternoon, Brennan headed to Pinney Park to present a total of $251,378 for three Door County projects.

The funding for each – earned through a grant process – came from the Wisconsin Coastal Management Program.

“When you think about Door County, you think about five state parks, 19 county parks, 23,000 acres of public and preserved land, 2 million visitors annually that help support 3,000 jobs and hundreds of millions of dollars in tourism expenditure here,” Brennan said before presenting the giant ceremonial checks. (He assured the recipients that smaller, usable checks would be forthcoming.)

Brennan said that protecting the places that make Door County special is too big of a job for any one individual or individual unit of government and that these three grants, which are administered by the department he oversees, represent “partnership at many levels” and investments in projects “that will pay off for generations.”

Brennan, who was introduced by Rep. Joel Kitchens, noted that although he and Kitchens are on different sides of the aisle, environmental issues are not partisan issues, so they should not be subject to the political divide that seems to be crippling the state and country.

“These are fun days when we get to come here and distribute resources to do good things from the ground up,” Brennan said.

The first grant for $100,000 was awarded to the Dunes Lake restoration project. The check was accepted by Greg Coulthurst, the Door County Soil and Water Conservation Department official who has been leading the charge to return the eutrophic marsh lake to its original alkaline fen-type condition through hydraulic dredging.

Coulthurst explained that he has been working on the Dunes Lake project – off and on – for 15 years.

“When I first started, the light at the end of the tunnel didn’t exist. We didn’t know what it looked like,” he said. “Now I think with this Wisconsin Coastal Management grant, the light is visible, and with a couple more grants, we’ll have a successful project.”

A pilot dredging project of about two acres of the 5.75-acre lake was performed in 2016. Coulthurst said the $100,000 grant will go toward phase 2 of the dredging project.

“We’ve got additional funding sources lined up, and we’re waiting to see if we get additional grants,” he said.

In particular, he mentioned a possible $700,000 grant from Sustain Our Great Lakes that he should hear about any day, saying that will determine whether this will be phase 2 or phase 2, encompassing the entire project.

Once the grant results are in, bids will go out for the dredging to begin next summer. Coulthurst said he met with the pilot-project dredging contractor, PCi Dredging of Minocqua, Wisconsin, to look at what remains to be done at Dunes Lake, and he also went to Little Lake in Sturgeon Bay with that city’s administrator, Josh Van Lieshout.

Brennan presented the second check – for $46,742 – to Krista Lutzke, invasive species coordinator with the Door County Soil and Water Conservation Department. In addition to funding educational efforts to help stop the spread of invasives, the grant will provide funding to purchase two waterless boat-cleaning units to be installed at two county boat launches.

“This is the next step in our efforts to streamline our message that we’re getting across to all of these 2 million visitors that come on an annual basis,” Lutzke said. “We have a lot of recreationists. This supplies us with the opportunity to showcase that a small and simple step is all it takes to halt the introduction of invasive species.”

The final check for $104,636 was presented to Door County Parks Superintendent Ben Nelson to help pay for the purchase of 57 acres of property to be added to the Door Bluff Headlands County Park, the northernmost point on the peninsula.