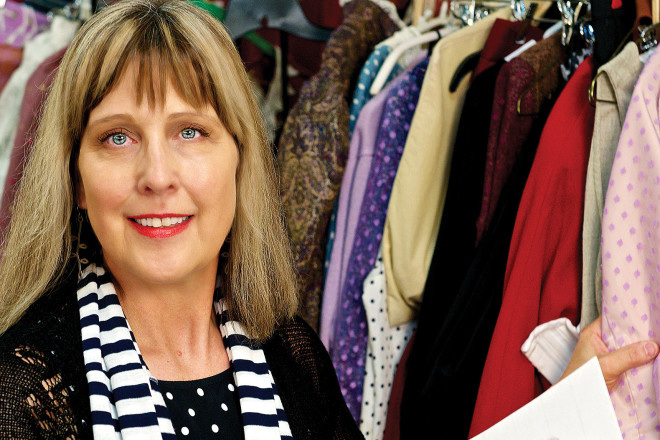 Kärin Kopischke double-majored in piano performance and studio art at Lawrence University in Appleton, Wisconsin. When the demands of the five-year program became overwhelming, she often relaxed by participating in theater activities – acting, singing, working with costumes, painting scenery and directing. “I really loved being able to do a little of everything,” she says.

Her first job after graduation – a year working at the Milwaukee Art Museum – convinced Kärin that visual arts weren’t enough to satisfy her. A year of teaching piano confirmed that music wasn’t completely fulfilling either. 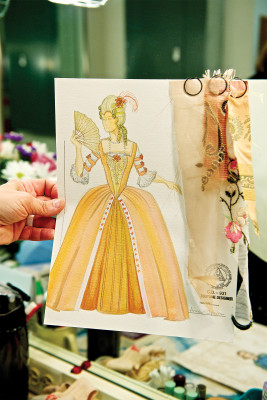 But when her husband, Alan, began work on a graduate degree in acting at the American Conservatory Theater (ACT) in San Francisco, Kärin got a job in the costume shop and discovered her true passion – being part of the collaborative process with actors and directors to design and build costumes that furthered the theme of a production. She also did freelance as a costume designer for smaller theaters in the area and, by the time they left San Francisco, had become the resident designer for ACT’s New Play Program.

Kärin especially loves theater because everyone can participate in some way, and those who work behind the scene are as important to a production’s success as those who appear in the spotlight. Also, unlike many activities that stress competition and winning, theater is based on the cooperative effort of everyone involved, building camaraderie and trust.

The Kopischkes moved to Chicago in 1992. They both did freelance work, and were soon spending their summers with Peninsula Players. When Alan was named the theater’s director of development in 2007, the family – that now included children Anya and Simon – moved to Door County.

During their years in Chicago and later Milwaukee, Kärin designed costumes for the Court, Steppenwolf, Goodman and Chicago Shakespeare theaters in Chicago and the Rep, Skylight Opera and First Stage Children’s theaters in Milwaukee, as well as Peninsula Players. “When we came to Door County, I wasn’t sure I’d continue to get freelance assignments,” she says, “so I looked for something else to do.” 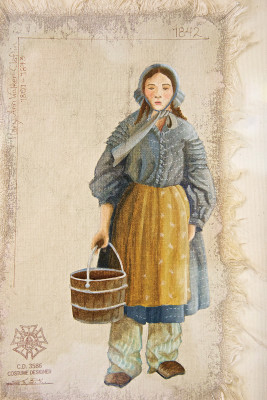 She need not have worried. In recent years, she’s dressed actors for Peninsula Players, Skylight, Steppenwolf, opera companies in Boston, Philadelphia, Colorado and Minnesota, a new children’s musical written by Harry Connick, Jr., for First Stage and Feed the Fish, the movie shot in Door County with Tony Shalhoub. Since 2011, she’s also been a full-time member of the faculty at Lawrence, her alma mater; she teaches, designs costumes and oversees the costume shop three or four days a week during the school year.

Kärin has also used her expertise in costuming and her deep love of history to explore the role of women important in Door County’s early days. “I found very little information at first,” she said. Often, if women were mentioned at all in written records, it was as, for example, Mrs. Increase Claflin. It took a lot of digging to discover that her name was Mary Ann, that she was an illegitimate child, raised by an aunt who sold her into marriage at 14 years old. When her first husband died, she married Claflin, who eventually brought her here. I found a picture of her at age 60 or 70, drew what I imagined she would have looked like as the young mother of six and did a treatment of her in clothing appropriate to that era.

“The Gibraltar Historical Society became interested in what I was doing and funded the expanded project. Patti Podgers wrote a first-person narrative for each of the 10 Fish Creek women we researched. We’ve also done paintings and writings for 10 historical women in Ephraim and Sister Bay, with support of their historical societies. Baileys Harbor will be next, although it’s becoming more difficult to fund the research since state money has been drastically cut. When we’ve completed five or six communities in the series, we hope to compile the women’s stories and clothing treatments into a book.” 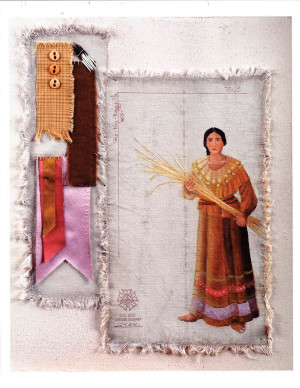 In appreciation for the Gibraltar Historical Society’s initial support, Kärin staged a series of fashion shows four years ago at Noble House in Fish Creek, using historical clothing from her own collection and those of the historical society. The show, titled Garments of Our Foundation, spanned the years from 1860 to the 1920s. The first half of the show featured Anya and several of her friends from Gibraltar High School modeling only the under-garments their ancestors would have worn.

“They absolutely loved the corsets!” Kärin says. “It helped them realize what a difference a corset made in the way a woman moved and lived.”

For the second half, the models donned the tiny dresses of the period over the corsets and petticoats. The show was repeated three times as a fundraiser for the society.

In late June 2013, Kärin staged two more shows at Noble House, featuring a collection of 15 wedding dresses and four flower girl dresses dating from 1850 to 1950. Both days drew sell-out crowds. (Students again served as models, although some who participated in the earlier shows had outgrown the styles of their great-grandmothers’ day.)

In addition, Kärin has volunteered her time during Anya’s high school years at Gibraltar, working with the lavish musicals Lizz Thomas directs each spring. In some cases, Kärin has mentored students in costume design and for some shows, designed and built most of the costumes herself. This spring, for example, she 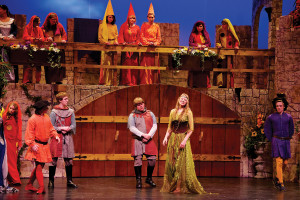 designed and created many of the 35-plus costumes for Gibraltar’s production of Once Upon a Mattress and borrowed others from shows at Lawrence, including chainmail and footwear appropriate for the Middle Ages for all the cast.

This fall Anya will be off to Bard College in Annandale-on-Hudson, New York, to major in theater, her goal since second grade (and appropriate for someone named for a character in Chekhov’s The Cherry Orchard). Simon, a sixth grader, will continue to pursue his interests in math and art. After 13 years with Peninsula Players, Alan was recently named executive director of the Birch Creek Music Performance Center. And Kärin will continue her work as one of the county’s premiere designing women.