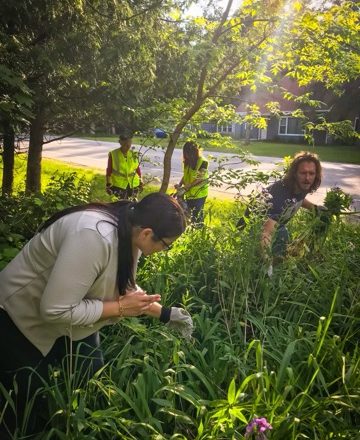 Yvonne Torres, a Destination Door County (DDC) staff member; Christina Studebaker of United Way; community member Mary Spittell; and Jeff Lutsey of Waseda Farms and a DDC board member, are all at work during the June Leave No Trace Tuesday event in Baileys Harbor. The next event will be July 13, 5:30-7:30 pm, in Sister Bay, with the specific location to be announced. Submitted.

Veering from promotion toward stewardship, Destination Door County (DDC) has begun a series of volunteer events called Leave No Trace Tuesday. The next one will take place July 13, 5:30-7:30 pm, in Sister Bay. DDC will announce the location soon.

“It was an awesome event, and it was really nice to see a bunch of local families and residents participating,” Gill said.

Morgan Rusnak, membership manager for Destination Door County, said three groups had separate tasks. One did general weeding work near the nature center, and another walked along Highway 57 to pick up litter. The third group headed to the Family Discovery Trail to pull dame’s rocket and realized that someone had already removed the patch of the invasive species near the trailhead. So staff members crossed the highway to The Ridges Inn and asked the proprietors to allow the group to remove the noxious flower.

“That’s kind of how it goes with invasives: You have to get all of them, or else they’re going to continue to spread,” Gill said.

The innkeepers welcomed the volunteer assistance.

“Talk about a cool display of teamwork and neighbors helping neighbors!” Rusnak wrote in an email.

The sanctuary’s director of operations helped the group’s members how to identify dame’s rocket and taught them how to get rid of patches they find at home.

“Everyone walked away with an actionable, educational component, too,” Rusnak said.