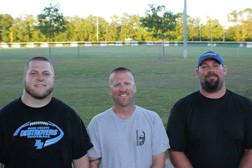 The Door County Destroyers traveled to Waukesha West High School to take on the Muskego Hitmen in a first round playoff match-up. The game was a tough defensive battle throughout. In the third quarter the game was tied at 10, and that’s when the Destroyers’ defense came alive.

The defense forced two turnovers, with the offense adding a touchdown and a field goal that led to a 20-10 Destroyers victory and its first playoff win since joining the Mid-States Football League (MSFL).

The Destroyers won the 2014 Wisconsin State Football League (WSFL) Championship, then made the decision to upgrade to the MSFL for the 2015 season to provide their fans with the thrill of more competitive, harder-hitting games.

“We have a small roster compared to the other teams in the playoffs, but it’s packed with tough football players and the chemistry is very, very special with this group,” said Destroyers Coach Chris Knapp.

The Destroyers advance to take on the Racine Raiders on Aug. 29 at Horlick Field. Kickoff is set for 7 pm. All fans are encouraged to travel to the game and to provide support for the players.

In looking forward to the second playoff week, Coach Knapp said, “Racine is a difficult task, but DC is rolling right now.”