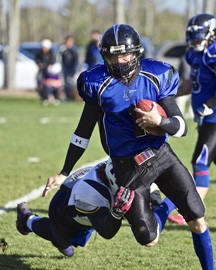 On June 20 in Baileys Harbor, the Racine Raiders bullied the Door County Destroyers to a 52-11 victory. The Raiders’ offense was crisp and on point for most of the game, with a couple of long drives for scores. Their defense held the Destroyers to less than 300 yards offense and only one touchdown. The Destroyers were beat in all three aspects of the game and the Raiders showed why they are the defending MidStates Football League (MSFL) and National Champions. With the win the Raiders are 1-0 in the season and the Destroyers drop to 0-1-1.

Here are some of the Destroyers highlights from the day: quarterback Alex Whitney was 17-37 for 229 yards and had one touchdown; running back TaMar Scott rushed 13 times for 50 yards; wide receiver Andre Wilson caught four passes for 93 yards and one touchdown; wide receiver T.J. Hulbert had four receptions for 80 yards; linebacker Chris LeCloux led the defense with eight total tackles and one pass deflection; linebacker Donny Johnson added six total tackles; linebacker Brock Rosendale chipped in with one solo tackle, one tackle for loss and one interception; and kicker Eric Natwick was 1-2 on field goal attempts, connecting on a 37-yarder.

The Destroyers will be off for the next couple weeks and will return to action on July 11 when they travel to Illinois for a game against the Leyden Lions. For more information visit doorcountydestroyers.com.