In their second year as a semi-professional football team, the Door County Destroyers capped a dominant season winning the Wisconsin State Football League Championship on Saturday, Nov. 8. The Destroyers defeated the Sheboygan County Rebels 17-7 in a cold and competitive matchup at Valders High School. The win finalizes a season in which the Destroyers saw only one loss, finishing 11-1.

The Rebels struck first with a 37-yard pass to put the Destroyers on their heels early in the game. Halfway through the second quarter, Quarterback Alex Whitney completed a pass to Andre Wilson to tie the game. The Destroyers capped off the half with a field goal as time expired to secure a three-point advantage over the Rebels heading into the second half. 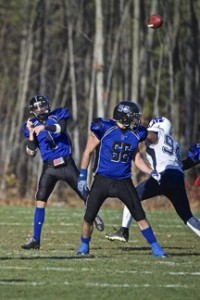 The Destroyers began in 2013 and few expected the team to be so successful in their infancy against a well-established league. After losing in the first round of the 2013 playoffs, the Destroyers increased their recruiting efforts. “We were reaching out to players from different leagues. We had starters backing up starters this year. Our depth is our greatest strength,” said head coach Jaime Flores.

As the sun went down and the game rolled on, this depth was important to keep the Destroyers at full force through the second half. Following a deep pass to bring the Destroyers within yards of a touchdown, Whitney powered his way into the end zone to put the Destroyers up 10 points. The Destroyers defense held this score through the fourth quarter, securing the team a championship title with a final score of 17-7.

Sturgeon Bay native and defensive end Bryan Beachler earned the MVP trophy. Beachler, who played with a broken left hand, recorded four sacks in what was primarily a defensive win for the Destroyers. Quarterback pressure also forced five interceptions in the Destroyer’s favor, including on the last Rebel drive of the game, to send the opponent back to Sheboygan empty-handed.

Head Coach Flores hopes the win will put the Destroyers on the map both in Door County and throughout northeast Wisconsin. The successful season makes the team more attractive to recruited players as well as sponsorship support and Flores looks to capitalize on the strong reputation the team has built in the two years since forming. The Destroyers will now take time off before preparing for the 2015 season.