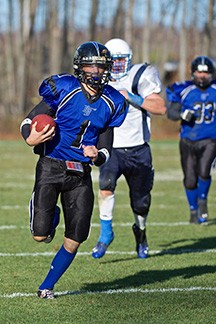 On Saturday, Aug. 29, the Door County Destroyers traveled to Racine to take on the Raiders in a second-round playoff game. Early in the season these two teams faced off in a lopsided battle as Racine took it to the Destroyers with a 52-11 victory.

This time around, it was a much more competitive game. Racine jumped out to an early 14-0 lead after one quarter. The Destroyers fought back with an 80-yard scoring play from Alex Whitney to Matt Gajewski. The ensuing possession, Whit McAfee intercepted a pass and returned it 19 yards for a touchdown. Going into halftime the score was tied up at 14. DC once again fell behind as the Raiders led 21-14 to start the fourth quarter. Whitney found Gajewski again for a 31-yard touchdown to make the score 21-20. Racine came right back and poured on two quick scores to make it 34-20 with less than five minutes remaining.

With 1:30 to play Whitney found TJ Hulbert for a 41-yard touchdown to bring DC within 7. The defense stopped the Raiders and with 20 seconds remaining the Destroyers were on its last chance to make something happen. An interception by the Raiders defense sealed the deal and DC fell 34-27 in an entertaining and competitive playoff game.