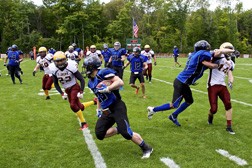 Destroyers’ Running Back Jake Wickman (23) racked up 127 yards and one touchdown in the Sept. 13 29-6 win against the M&M Timberjacks. Photo by Len Villano.

The Destroyers’ offense started out slower than usual as the Timberjacks played tough defense. With the Destroyers up 14-6 coming out of halftime, the offense started to come alive and added two more touchdowns to extend the lead and come out with a 29-6 victory.

Defensively, the Destroyers were led by linebacker Chris LeCloux, who had 13 tackles – one for loss – and 1 interception. Defensive end Bryan Beachler added seven tackles, one for loss. Cornerback Victor Williams came up big on Special Teams as he accounted for two forced fumbles, both recovered by the Destroyers.

With the victory, the Destroyers are now 6-0 on the season and the T-Jacks fall to 3-3 in the Wisconsin State Football League.