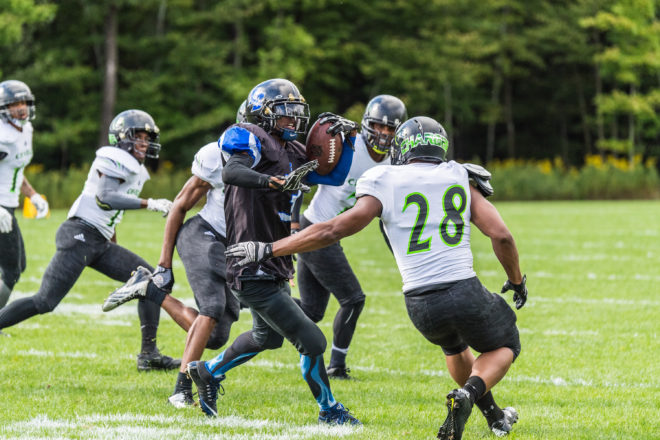 Door County Destroyers beat the Milwaukee County Chargers 27-20 in the first round of the 2016 MSFL season playoffs at home in Baileys Harbor, Saturday September 10th. Photo by Len Villano.

The Door County Destroyers football team improved to 2-0 in preseason as they defeated the Fox Valley Force by a score of 20-13 on May 13 in Appleton. The game was dominated by the Destroyers’ defense as they recorded five sacks, two interceptions, a safety and a touchdown.

The Destroyers came out of the gates firing thanks in part to a 64-yard bomb from QB Dan Parker to Steve Strong. The defense added an interception return for a touchdown and it was quickly 12-0. The Force followed up with a touchdown and the Destroyers held the lead 12-7 at halftime. Running back TaMar Scott punched in a touchdown in the third quarter to go up 18-7. Again, the Force responded as they scored to make it 18-13 early in the fourth quarter. The Destroyers defense held strong and closed out the game with a safety and the win 20-13.

The Destroyers play next on May 20 at 6 pm in Eau Claire against the Chippewa Valley Predators.