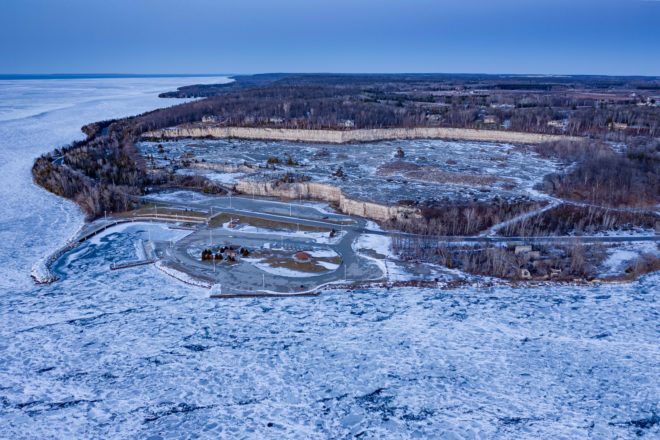 Developers have proposed a 117-unit RV and single-family home development at the old stone quarry in the Town of Sevastopol. Photo by Brett Kosmider.

The developers of a proposed housing and RV-park development have filed an appeal of the Resource Planning Commission’s (RPC) denial of a conditional use permit (CUP) for the development.

The RPC denied the permit for the proposal by developers Tom Goelz and Mike Parent on Feb. 26. The project plan included 115 single-family homes, with room for 117 Class A motorcoaches at the site of the old Leathem Smith stone quarry in the Town of Sevastopol.

The RPC based its decision on its determination that the application did not meet several requirements for a conditional use permit. The primary provisions were that it would negatively affect neighboring property values, does not fit the Door County Comprehensive Plan and was not similar to other uses in the area. The committee also determined that it did not meet three other provisions of the ordinance.

Parent said he knows people don’t want to be thinking about the development during the COVID-19 crisis, but the appeal was filed as a matter of timing.

“We’re still looking at potential over-the-counter permits, but the 30-day deadline to appeal was coming up, so we felt we had to get the paperwork in,” Parent said.

The appeal will first go to the Town of Sevastopol again for review. The town does not have to take it up, but if board members think they might change their decision, they have the option to review it again. Both the town’s plan commission and board recommended that the RPC deny the permit after hearings in January.

The appeal would then go to the five-member Board of Adjustment (BOA) to be heard anew. Mariah Goode heads the county’s Department of Land Use Services. She said that in her experience, appeals of this type normally take much longer than the original hearings – an ominous notion for those who sat through nearly 12 hours of RPC hearings in February.

Brenda Lange, who has been part of the No Quarry RV Village opposition group, said she was not surprised by the appeal.

“We’re developing a plan to show why this is the wrong project in the wrong place,” she said. “Three different government bodies have voted unanimously against this project. That says a lot.”

Goode said she’s not sure when it will come to the BOA or what that meeting might look like, given social-distancing guidelines. It’s possible the hearing would take place via videoconference.

Parent and Goelz have hired an attorney who helped to craft portions of Act 67: legislation that limits the criteria that a municipality can use to deny a conditional use permit.

“Several of the 17 criteria in the Door County code for CUP approval are inconsistent with the provisions of Act 67,” the developers wrote in their appeal. “In addition, using the statement ‘No conditions can be imposed to ensure that all applicable requirements will be satisfied’ is illogical and an inadequate reason for denial in the conditional use process.”

They also said that adequate weight was not given to the current zoning classification of the property.

“Although we are evaluating several viable options which do not require a conditional use permit and offer no opportunity for public input, we see no reason not to pursue our original plan,” Goelz said. “According to our attorney, because of the zoning category and the provisions of Act 67, this is likely to become a property-rights test case with other interested parties potentially joining.”

Opposition to the project has been staunch. Neighbors put up yard signs saying “No Quarry RV Village,” launched a website and hired an attorney to fight the project, which they say would lower property values, create traffic problems and negatively affect groundwater quality.

“It’s a commercially zoned, beautiful property. Why would you not develop it?” Goelz said.