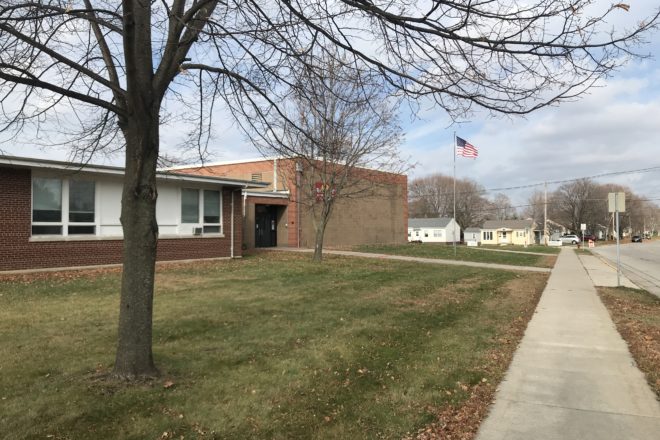 Sunset Elementary School at 827 N. 8th Ave. will close after the 2020-21 school year. If all goes as planned, workforce housing will be constructed on the site, as well as across Erie Street on a lot that currently serves as parking for the school. Photos by D.A. Fitzgerald.

It’s almost a cliché, the fate awaiting a shuttered school building: slow deterioration over the years as a community figures out how to  redevelop or repurpose the vacated structure.

That destiny doesn’t seem likely for Sunset Elementary School once the Sturgeon Bay School District (SBSD) closes it at the end of the 2020-21 school year.

The circa-1954 school building at 827 N. 8th Ave. includes a parcel across the street that functions mainly as a parking lot for school employees. One of the developers will develop the parking lot, the other the land where the school building is located.

The developer the Common Council chose to work with for the parking lot parcel is Doreen Phillips of Maritime Heights. She’s also developed the Amity Field apartments across Erie Street from the school and adjacent to the parking lot. Her proposal would essentially extend the existing housing with another eight to 10 market-rate townhome units with detached garages. The housing would be in the affordable-housing range of $795-$995 monthly.

The developer the council selected to work with for the school building site is S.C. Swiderski, which completed the Sturgeon Bay Estates apartment project on Grant Avenue on the city’s west side. The company’s plan calls for 23 to 28 market-rate, townhome-style units with attached garages ranging in price from $845 to $1,145 per month. Market-rate rental housing is considered to be appropriate for those earning between 60 percent and 120 percent of the median income, which was $52,947 in 2018 dollars in Sturgeon Bay.

The city formally requested the development proposals in October, even though the school district still owns the building.

“We’re almost identical boundaries, us and the school district, so we’re pretty close with our taxpayers, and we have an interest in getting that redeveloped,” said Marty Olejniczak, Sturgeon Bay community development director. “We don’t want another West Side school deteriorating over two decades.”

The workforce housing units would meet a shortage of rental units that AECOM documented in the 2019 Door County Housing Analysis. That study identified a need for 45 rental units over the next five years in central Door County – an area defined as the City of Sturgeon Bay, Sevastopol and Nasewaupee.

Voters supported the decision to close the school as part of the referendum package passed in April 2020. Assessments had indicated that $4.3 million would be needed for capital maintenance items such as replacing major building systems and renovating the building. Meanwhile, enrollment projections showed the district could stand to close one of its three elementary schools.

Surveys conducted prior to the referendum showed that 75 percent of respondents supported the school’s closure.

“The survey drove what the board eventually approved for the referendum resolution, and then once the residents voted on the referendum last April, we knew the direction that things would go,” said Dan Tjernagel, SBSD superintendent.

Selling the property had been discussed as a probable outcome throughout the process, Tjernagel said. The developers are expected to enter into a contract with the school district to purchase the property and a development agreement with the City of Sturgeon Bay.

“The last thing we want to do is have the city own the property,” said Mayor David Ward during the Common Council’s Nov. 3 meeting.

The developers were allowed to request incentives. S.C. Swiderski asked to buy the property for $1, with the school responsible for demolition and environmental costs. S.C. Swiderski also requested incentives of $200,000, with $50,000 paid upon completion of each of the development’s four buildings.

Maritime Heights asked to pay a minimal amount for the parking lot land and to receive $30,000 in tax rebates that could be spread out over time.

The city may also create a new Tax Increment Financing (TIF) district at the location that could fund financial incentives and improvements.

“I’m highly resistant to TIFs,” Ward said. “One [of the city’s four] worked out wonderfully; one didn’t; one will be OK; and one maybe. But that neighborhood, there’s been some new building in it, and part of what might get done through a TIF is some neighborhood improvements like sidewalks.”