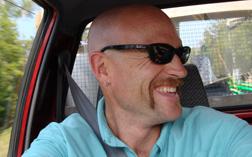 Baileys Harbor firefighter, Caleb Whitney, will be the featured poet in the UU Fellowship’s Dickinson Poetry Series on Dec. 8 at 7 pm.

Writing in isolation for more than 10 years, Whitney never really addressed any audience other than himself. Intrigued by Linda Aschbrenner’s critiques of the poetry entries to the 2008 Hal Grutzmacher contest, he sent several poems to Aschbrenner’s journal Free Verse.

“Her open admonishment to pursue publishing is the sole reason I entered the Wisconsin People and Ideas annual contest,” he explained. The resulting place-winning, publishing, and reading at the 2009 Book Festival in Madison opened the door to sharing all of his work.

Whitney’s separation of the “internal” audience from the more traditional “external” audience has been the result of using free verse poetry as a way to personally come to terms with his experiences as a rural firefighter. Inspired by two local poets (Barbara Larsen’s Pine Ridge, 1937 and Mark Turcotte’s Exploding Chippewas), he worked and reworked many of his poems for years in order to pare them down to just the essence of each event described.

His poetry has been printed in the Peninsula Pulse, Free Verse, Verse Wisconsin, Wisconsin People & Ideas, and the Wisconsin Poets’ Calendar.

The Dickinson Poetry Series features a well-known poet each month. Others in attendance are then invited to read their poetry. The series is free and open to the public.

The UUF is located at 10341 Highway 42, Ephraim. For more information, visit http://www.uufdc.org.