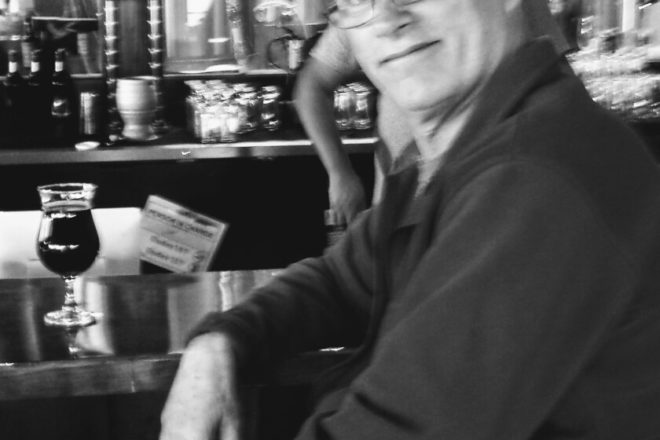 Mike Orlock will be the featured poet in the UU Fellowship’s Dickinson Poetry Series on Wednesday, March 8 at 7 pm.

Mike Orlock is a retired high school teacher and coach who splits his time between Illinois and Sturgeon Bay.

He describes his poetry as “light verse with a topical twist.” Subjects include family relationships, his pet dogs, travel, the Door County landscape, politics, retirement, and poetry itself. “I like poems that are clever and accessible, profound in a funny or poignant way, and I try to write poems that are fun to read or think about.”

For twelve years, from 1989 to 2001, he wrote film reviews for the Reporter-Progress newspapers in suburban Chicago and was a contributing member of the Chicago Film Critics Association. His short fiction has appeared in TriQuarterly, the literary journal of Northwestern University, and Another Chicago Magazine. He has twice been honored with Illinois Arts Council Awards for his short stories. He came late to writing poetry, inspired by a course he took in Learning in Retirement taught by his friend and mentor, David Clowers, in fall of 2009. Since then, his work has appeared online in “Your Daily Poem” website, in the WFOP yearly calendars, Verse Wisconsin, the Los Angeles Times, the Peninsula Pulse, and various other venues. He won the Wisconsin Writers Association “Jade Ring” award in 2014 in the Free Verse category, and was awarded the MUSE prize for poetry from the Wisconsin Fellowship of Poets in 2016. He is a member of the Unabridged poetry group in Door County.

On the second Wednesday of every month the Dickinson Poetry Series features a renowned local or regional poet followed by an open mic, providing an opportunity for others to read their poetry. A reception follows affording an opportunity to meet the poets. The Series is named for Emily Dickinson, a prolific poet and philosophically in tune with Unitarian beliefs. The public is welcome and there is no charge. The Unitarian Universalist Fellowship is located at 10341 Hwy. 42 in north Ephraim. For more information call 920.854.7559.