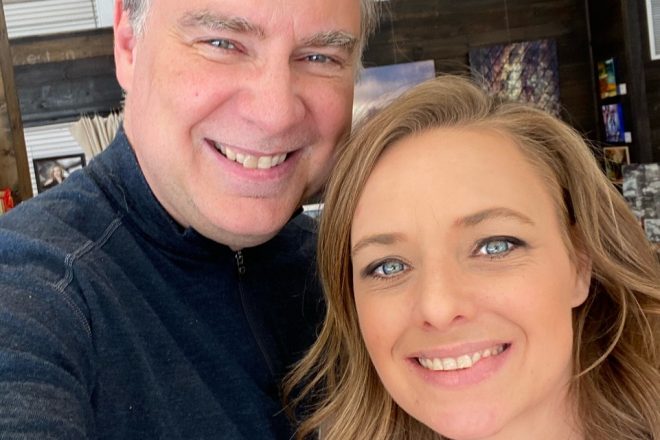 Mike and Laura Caplan had often visited Door County from their home in a northern suburb of Chicago before they started looking for a place they would use for occasional vacations and rent the rest of the time. Shortly after starting renovations they decided not to rent it. And then, as long as they were here in an artsy community, they decided they should find a place to showcase their photography.

They started in a backroom of Lawless Coffee on Madison Avenue and Oak Street in Sturgeon Bay. Then last year, when a storefront across the street opened up, they moved. Claudia Scimeca, an abstract painter, has her studio there as well.

By day, Mike is a long-time meteorologist working at Fox 32 in Chicago, a job that requires him to rise around 2 am to start work at 4. He also does forecasts on Facebook from Studio C, whether that is home in Chicago or on Glidden Drive in Sevastopol, where Laura and the dogs occasionally wander into the broadcast.

“My wife making an appearance has made it really popular,” Mike said. “People love it – getting a view behind the scenes and getting to see into our daily lives. Last night I showed pictures of a cocktail Laura made that changes color, and many viewers know the names of our dogs.”

He picked up his interest in photography, which had languished since high school, after he had a son and decided he should learn to shoot good pictures.

“I tend to be pretty OCD so the more I did, the more I wanted to learn,” he said.

Laura became his artistic muse and model as he moved into portraiture, but outside the studio they have very different styles.

“We’re in Grand Tetons National Park and there’s a beautiful barn and mountains in the background, and I’m getting everything set up to make a photo while Laura is in the parking lot taking a picture of an old apple core someone threw out,” he said.

Her style is very abstract, so by the time she is finished processing the image in Lightroom or Photoshop, the apple core may be unrecognizable.

“So we have different flavors of photography and it just kind of works out nicely for us to be able to share that passion, which is how I got into doing more abstract with my photography as well – because we don’t need two pictures of the Grand Tetons to sell,” Mike said.

But they are also doing a lot of recognizable Door County images to meet the tourist demand.

Visitors looking for something to take home as a souvenir generally want smaller work, while those decorating a home or office go for the bigger pieces. ARTicipation offers both, from greeting card-sized images suitable for display on a shelf, to prints that can dominate a wall. They also carry a variety of paper prints, and prints on aluminum, glass and wood or metallic paper. They estimate their catalog has 50,000 images.

Mike’s tastes range widely from scenery to dogs to people; after this interview, they were shooting a senior portrait both inside and outside the studio. As a meteorologist, Mike monitors the weather for good conditions for outdoor portraits. A session for a family group portrait had to wait for a break in the weather that Mike knew was coming, and he had enough time to get the shot done.

“I really enjoy photographing people,” Mike said. “I love interacting with folks, although it can be challenging at times, especially if you’re doing a family because there always seems to be one person who is being difficult.”

“We did portraits of 13 dogs around Halloween for our Spooky Pooch promotion,” he said.

Mike also likes to do light painting, where the illumination comes from a handheld flashlight used to “paint” the picture. He had recently done his first portrait with that technique.

The gallery displays a 40 x10-inch metal print of horses running wild, titled The Far Turn. Mike said he eliminated the fence and barn, magnified the dust and tried to bring out some of the motion.

“The goal here was to capture some of the energy of the horses,” he said.

The print is priced at $1,450, the most expensive image on display. Laura said most work is in the $200 to $500 range although she is adding more small pictures, and frameable cards are $6.95

Mike comes up from Chicago on Friday afternoons and leaves Sunday afternoon while Laura usually remains in Door County.

“We all have a lot on our plate,” he said. “She’s very busy with her additional jobs, with managing social media and designing websites, and then running this place.”