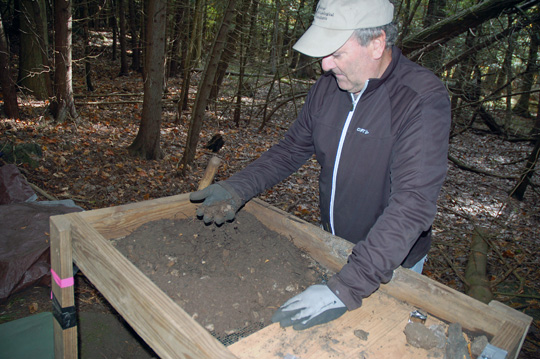 Randy Dickson screens a bucket of earth for shards of pottery, bones and tools.

Both Randy Dickson and Willy Kemps of Midwest Archeological Consultants were children when they first caught the archeology bug – Dickson in Des Moines, Iowa, and Kemps in Kiel, Wis.

Dickson was five when he and his brother were watching the excavation for a retirement home. “They were pulling artifacts out. I still remember that so vividly. It was so interesting,” he said.

Kemps was on his father’s farm, cutting through a hayfield on his way to school, when he found his first arrowhead. “It must have been a village,” he said, adding that the first arrowhead was just the beginning of his artifact finds on the farm.

That’s all it took to set each of them on a path to uncover history through artifacts. Today, they have switched states, with Dickson living in Wisconsin (Sturgeon Bay) and Kemps in Iowa. Kemps has been making the drive from his Iowa home to the Ida Bay Preserve at Crossroads at Big Creek to dig for history. 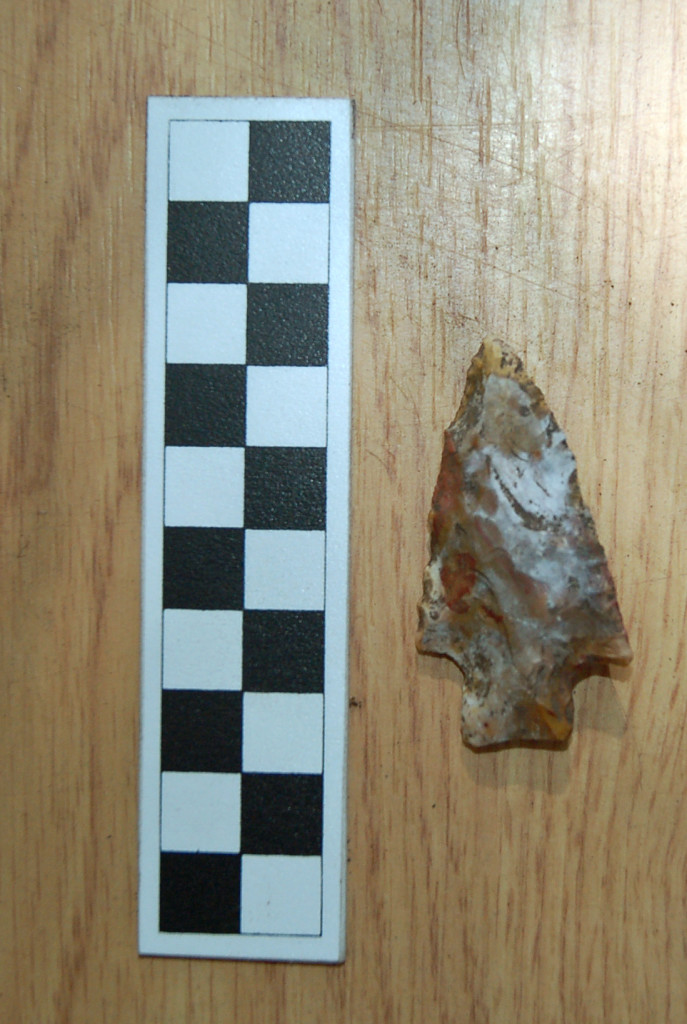 A nice arrowhead found at the Ida Bay site.

“This is so awesome for me. I live a mile and a half from here. This is fantastic.” Randy Dickson. “Willy thinks this is so great that he drives 400 miles from Iowa each week to dig. We can’t believe people are paying us to do this, and giving us the opportunity to pass it on to kids.”

They were first invited to visit the site last spring.

“Willy dug a shovel test last spring and he got a projectile point tip and a scraper,” Dickson said. “It’s a great satisfaction to find these things. When he found that first projectile point, he called me and he was so excited, he said he couldn’t even hold his cellphone.”

“It was probably the biggest one I ever excavated, and it was a test shovel,” Kemps said, still shaking his head at the luck of that random shovelful of dirt.

“Who knows how many of these shovel tests we put in the ground and there’s an arrowhead right next to it?” Dickson said.

Even though they are in the very preliminary stages of the site investigation, the archeologists are convinced they are digging up artifacts from either a temporary hunting and/or fishing settlement, if not an actual village.

“It was definitely a settlement,” Dickson said. “We have depressions in the ground that look like house floors and others that look like storage pits. We know what those look like because we have a lot of these on the Menominee Reservation up near Shawano. I was just up there and they look exactly like these. They have the same shape, depth and size.”

Next week, Dickson, Kemps and several of their professional friends will be sharing what they have uncovered to date with middle school students and adults interested in the dig. They believe they are uncovering the story behind a 2,000-year-old settlement at the end of the original bay of Sturgeon Bay, at the Ida Bay Preserve, which has been part of Crossroads at Big Creek since The Nature Conservancy gave the property to the experiential educational center and preserve two years ago. 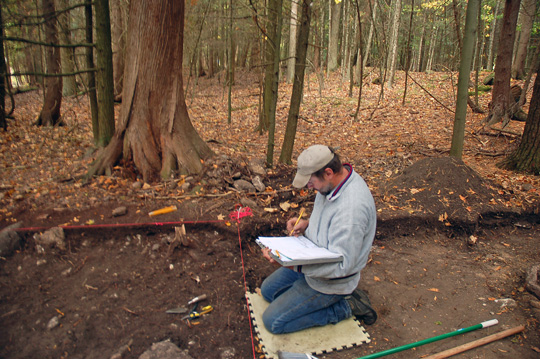 Willy Kemps records the location where he found an item while digging a test unit.

“At Crossroads we had these gentlemen in several years ago,” said Coggin Heeringa, director of Crossroads. “They gridded out Crossroads. We’re relatively sure a place by Big Creek was at least a temporary camping area where they would come to fish seasonally. When The Nature Conservancy gave us this land, what I see geologically is that we have a whole lot of ancient shorelines in here, and Indians would have lived by the shore. So I got a bunch of grants and had them come in and start gridding here.”

“One of the first shovel tests Willy put in, he got a really nice arrowhead,” Dickson said. “It’s indicative of North Bay/Middle Woodland, 200 BC to 250 AD. A few weeks later he had about three pounds of pottery from one shovel test, so we had two really hot areas.”

Dickson explains that the hallmarks of the middle Woodland Period are conical mounds, horticulture and pottery.

“If there is pottery, they were settled,” he said.

On this particular day, Dickson is sorting through buckets of material that Kemps collects from a stringed-off 1-meter by 2-meter test unit. As Kemps dumps onto a screen a freshly collected bucket of material he has collected from the test unit, Dickson sifts through the dirt, looking for bones, tools and pottery shards.

“They were working stone a lot here,” Dickson said. “It is a bi-face reduction station, where they were taking big cobbles of chert and reducing them down so they’re usable.”

He also notes that the arrowheads they have found so far are not particularly sophisticated, which suggests the makers and users of those arrowheads were not relying exclusively on hunting, and that they might have been fishing and growing crops as well.

“You have to project yourself back in time and think what it was like,” Dickson said of their interpretations of their finds. He said it helps immensely that Kemps has learned the art of flintknapping.

“Willie is an expert flintknapper, meaning he can make stone tools, so he knows all the reduction sequences and the resulting flakes you get in the shattering, and what stage in the process did those particular flakes occur,” Dickson said.

Kemps adds that he has been flintknapping for 20 years. “But the first 10 years all I made was gravel,” he said.

He made a couple of arrowheads for Dickson, who said they were so sharp you could cut a steak with them. “Great tool,” he said.

As Dickson is talking, Kemps is digging in the test unit with a trowel. “I think I’m getting to a front door area. Our artifact density dropped dramatically,” Kemps said. “I think we’re inside of a house. We were definitely right in somebody’s living room.”

A collection of pottery shards.

“Door County has a rich prehistoric cultural history, a very high site density, with the bay on one side, lake on the other, wetlands in between,” Dickson said.

“When they started finding real stuff, we wanted to involve the community because Crossroads is an educational facility, so we wrote a grant to the community foundation and got a grant to make this a community thing,” Heeringa said. “The last weekend in October we are having middle school kids here for the whole week, but we also want to open it up to the public so some adults can come and learn and maybe some other schools.”

“It will be fun teaching kids hands-on archeology. There aren’t many places in the country you can do that,” Dickson said.

“We will have the kids sorting through the stuff,” Heeringa said. “Of course the archeologists will be standing by eagle-eyeing everything, but the kids are very good at picking out things that are different. We’ll have kids scraping and really, really doing things. That’s a Crossroads thing. You learn by doing it, not just looking at a video.”

To participate in the Ida Bay Preserve dig on Oct. 26-30, contact Crossroads at [email protected]. A teacher education class is also being offered through the University of Wisconsin-Green Bay. Use the same email address for more information on that program.