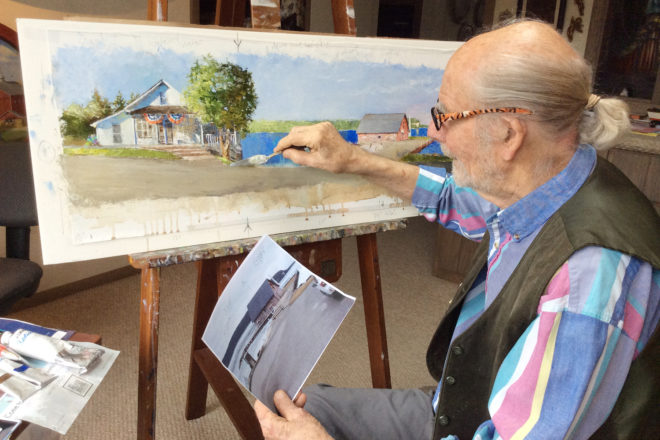 Karsten Topelmann, of Hanseatic Art Gallery, works with a palette knife and oils to create “Morning at Anderson Store & Dock.” The painting of the historic Ephraim locale is posed inside of a corner frame created by Karsten’s son, Lars Topelmann. Submitted.

At 88, Karsten Topelmann has discovered a new way to envision how the landmark locations of the peninsula could look on canvas. It doesn’t involve a shift in the lifelong artist’s chosen media of watercolor and oils, but a literal shift in perspective that pushes the boundaries of his two-dimensional work.

Earlier this month, Karsten debuted an oil painting at his Hanseatic Art Gallery of one of Ephraim’s most treasured scenes – the Anderson Dock and Store – that gives viewers an opportunity to see the scene in semi-panoramic fashion through use of a corner frame.

The original rectangular frame was built by Tradewinds Products III of Green Bay then modified by Karsten’s son, Portland-based professional photographer Lars Topelmann. Lars had been brainstorming new ways to display art last winter when he thought up the idea to use a corner as the foundation for a wraparound image.

Though it seemed like a simple concept – to slightly alter an item that has been an artistic tool for centuries – the reality of doing it was similar to rebuilding the wheel.

“I actually looked online and I didn’t see any,” Lars said. “You would think that that would be something in 2017 that there would be an abundance of. It seemed like such a simple idea.”

Drawing on his passion and talent for woodworking, Lars built a prototype of the corner frame. 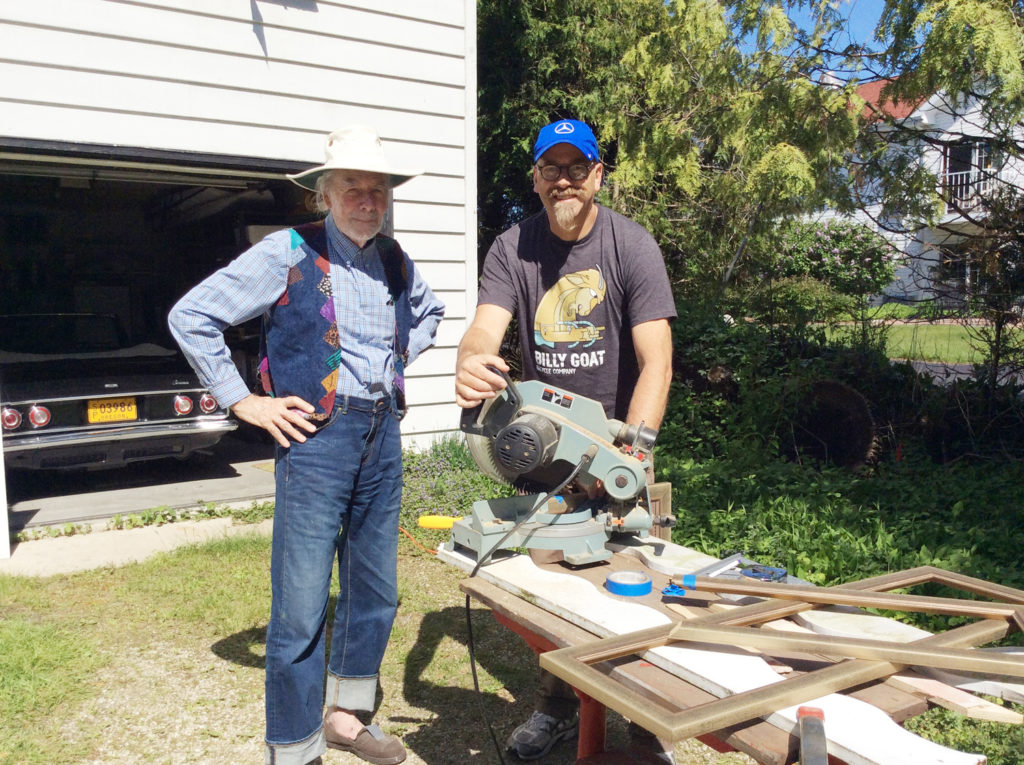 Inside the completed frame, he installed a photograph he took in Venice, Italy. The corner of the frame aligns with the corner of a building, at which point two canals diverge. When Karsten saw the prototype on a visit to Portland, he was inspired to create a painting fit for the unique frame.

The initial thought was to share the prototype with Karsten’s trusted Green Bay framing company, but the complexity of the task led the owners to say no. Instead, they built a standard frame with a simple profile and during a June visit to Ephraim, Lars completed the piece.

During that time, Karsten set out to find scenery fit for the frame. He found it at one of the village’s most iconic locations: the Anderson Store and dock.

“It occurred to me this would be a perfect subject matter because the Anderson Store, you’re looking at it straight on and if you turn to the right, you see the Anderson dock so that was the perfect idea for this corner,” Karsten said.

Working on 11” x 22” canvas laid flat, Karsten worked off photographs to replicate an early morning vision of the scene using oil paints and a palette knife. He had less than a half-inch of leeway when creating the painting and shared his progress through photographs, from initial sketch to final product, with Lars. 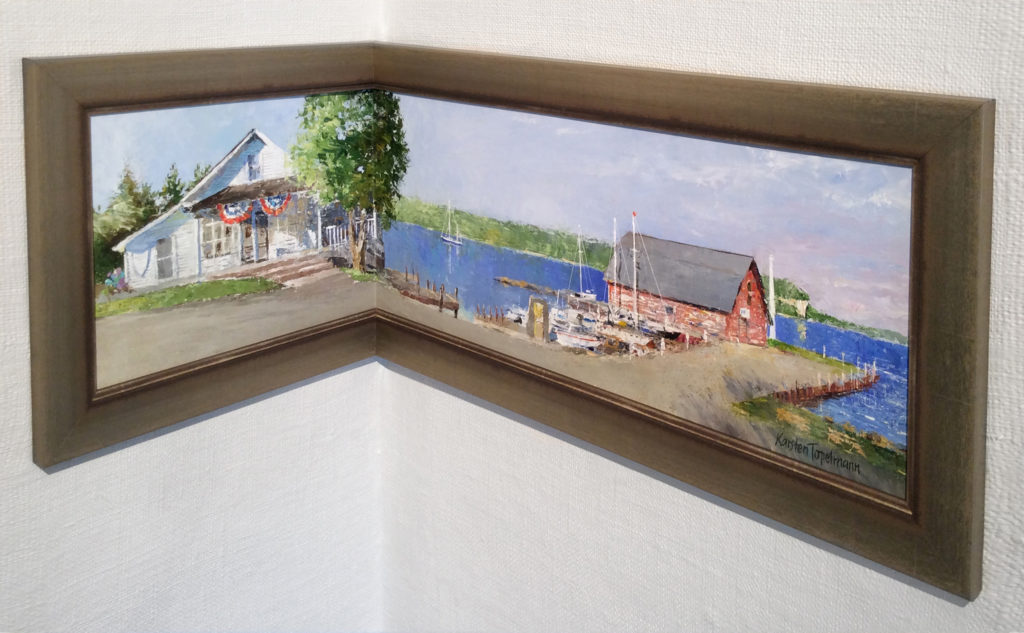 “Morning at Anderson Store & Dock” by Karsten Topelmann. The painting of the historic Ephraim locale is posed inside of a corner frame created by Karsten’s son, Lars Topelmann. It was on display at Hanseatic Art Gallery in Ephraim before being sold July 12. Submitted.

When it was finished, the most important and nerve-wracking task remained: transferring the flat painting into the bent frame. To do that, Karsten pre-mounted the canvas on a foam core board and, from the back, cut through the board to the canvas.

“I can bend it forward and then the canvas is still untouched,” Karsten said.

“Morning at Anderson Store & Dock” was hung in Hanseatic Art Gallery in time for the Fourth of July, beckoning longtime gallery visitors and friends eager to see the piece of art within the piece of art.

“The frame is the surrounding of the piece but it also is the concept of the piece,” Lars said. “It builds the structure for it and the framework.”

That framework – and the collaboration it took to pull it off – has inspired a new approach to creation for father and son, both together and separately.

“My father and I are in slightly different camps of does it have to be a panoramic or does it need to be a corner scene?” Lars said. “I would be curious to see what it would look like if you had a flat scene that was panoramic that went around a corner. Would your eye be confused that it’s bending?”

As Lars contemplates the varying images that could potentially work with the new frame, Karsten has turned a new eye toward his environment in search of a fitting motif for his next corner creation.

“Maybe downtown Fish Creek on the corner, but that may be too normal,” he mused. “Or maybe Sister Bay. Or maybe Ephraim, the two churches…”

The Hanseatic Art Gallery is located at 3060 Highway Q/Church St. in Ephraim. It is open 2 – 5pm Wednesday through Saturday. For more information call 920.854.4312. To see Lars Topelmann’s photography, visit larstopelmann.com. His other creations can be found at larsmade.com.