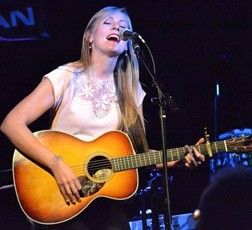 Singer-songwriter and guitarist Nora Jane Struthers and her band the Party Line will be featured in concert at the White Gull Inn in Fish Creek on Feb. 19.

Virginia-born Struthers made her 2010 solo recording, self-titled debut with such Nashville masters as multi-instrumentalist Tim O’Brien and fiddler Stuart Duncan. The album was received with ecstatic reviews: Bluegrass Unlimited praised it as “a marvel that combines brilliant songcraft, a sultry yet honey-hued voice, and an inspired sense of personal musical style.”

“Over the past three years, as I’ve been touring and performing, I realized that primarily I’m a storyteller,” Struthers says. “I’ve been working to hone my skills so I can do that better.”

An optional pre-concert fixed price dinner will be served at 6 pm. The menu consists of Coq au Vin, served with mashed horseradish scented potatoes, spinach salad with pears, walnuts and a warm cider bacon vinaigrette, crusty French bread and carrot cake or dessert. The concert begins at 8 pm and tickets are $16. Tickets, reservations and information are available by calling the inn at 920.868.3517.