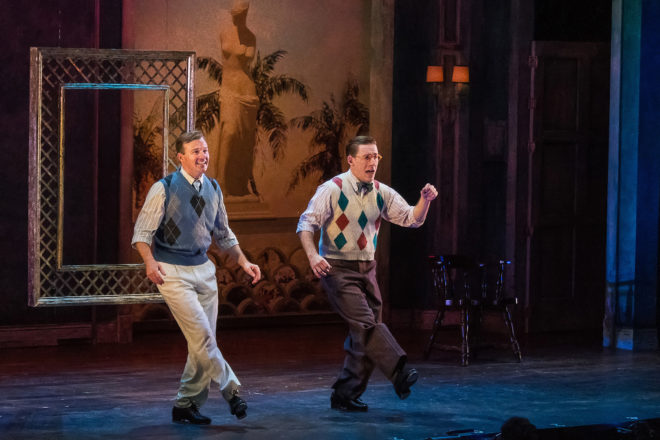 (Left to right) Drew Humphrey and Joe Capstick tap dancing in the Peninsula Players production of The Drowsy Chaperone. Photo by Len Villano.

Peninsula Players Theatre, in conjunction with its production of the musical comedy The Drowsy Chaperone, will host artist Matt Crowle on Aug. 3 at 6:30 pm. Crowle will speak about his process as director and choreographer. Tickets to performances are available; admission to the pre-show seminar is free.

“I typically spend about three months mapping out a show before I start rehearsals with a cast,” Crowle said. “I like to know that every dance step is planned and every moment is thought through. I also exchange countless phone calls and emails with my designers so we all know exactly what we can expect from each other. It’s hard work, but the most successful shows require superior preparation, and I accept nothing less than that from myself.”

Crowle and the 15-member cast of The Drowsy Chaperone had a limited number of days to work with the actors and Music Director Valerie Maze before it opened July 25.

The Drowsy Chaperone lovingly spoofs musicals of Broadway’s Golden Age and is a tribute to the song and dance musicals of 1930s Broadway. Performances are held through Aug. 12. For more information call 920.868.3287 or visit peninsulaplayers.com.