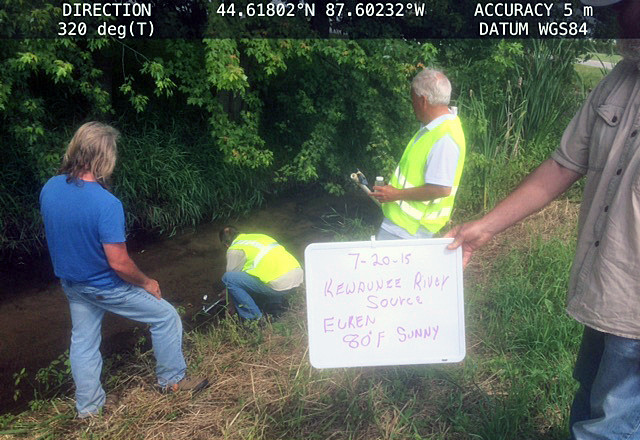 Each month for the past three years, several residents of Kewaunee County drive a 165-mile route at their own expense to collect water samples from the mouth and source of three rivers – Ahnapee, Kewaunee and East Twin.

They collect six samples, note the date and conditions through photographs and deliver the samples to a laboratory in Luxemburg. Several weeks later, they receive a report on the samples, which they send to several independent hydrologists, the Wisconsin Department of Natural Resources and the Environmental Protection Agency’s Chicago regional office.

The latest sampling report from the July 20 sampling found that three of the sites had enough E.coli to warrant a swimming advisory, if anyone was foolish enough to swim in the brown waters, and one was high enough – 1,553.1 CFU (colony-forming unit) – to warrant a beach closing (1,000 CFU), if these were public beaches.

“If you look at our sampling from the last couple of years, this is not out of the ordinary,” said Lynn Utesch, a Kewaunee County farmer, co-founder of Kewaunee Cares, and one of those who takes that 165-mile drive every month to collect samples. “A lot of that depends on what is happening on the ground when the sampling is taken.” 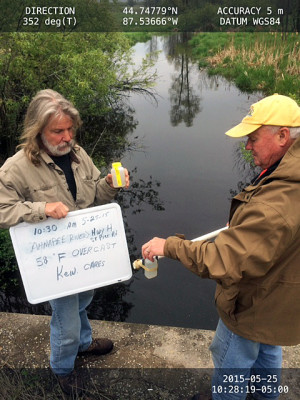 “The Ahnapee River in Door County, up at the source, is the only place we’ve actually seen any fish,” Utesch said. “The East Twin River was just put onto the Impaired Waters List. Historically speaking, it was one of the best trout streams here in Kewaunee County. We test at the Manitowoc/Kewaunee county line. There are no fish at all. We’ve yet to a see a fish anywhere in that river, which is really scary.”

Utesch said the DNR only collects phosphorus data, which is why the Kewaunee group wanted to sample for things area residents are finding in their wells, such as E.coli and nitrates.

Utesch said the organization decided to take on the water sampling project three years ago because no one else was doing it.

“We felt we had to do that,” he said. “We started to get a baseline just to figure out where the water quality was here in Kewaunee County. Kewaunee Cares started by looking at the beaches and the lake, with all the cladophora there. We started looking at, where is it coming from?”

The group noted that with every rain, where the rivers empty into Lake Michigan, huge brown plumes would form.

“A lot of time it actually curls around right to the beaches because the outlets for the rivers are to the north of the beaches and the current here flows to the south,” Utesch said. “Everybody likes to tell us Milwaukee sewage is polluting the beaches, but the current flows north to south here.”

The group’s original hypothesis was that they would find clean water at the source of the three rivers they were testing.

“Unfortunately, what we found is there are pollutants everywhere,” Utesch said. “We didn’t think that would be an issue. We thought we would have clean water at the top and dirty water going out into Lake Michigan. It’s a land use issue everywhere, not just where it accumulates. That became apparent after our first year of testing.”

Perhaps the most amazing thing about the monitoring program is that it costs about $500 a month to conduct the sampling, and it is almost completely funded by citizen donations.

“This is extremely costly to our organization, but we feel it is one of the most important things we do, to do this monthly water testing,” Utesch said.

Utesch said the DNR is picking up the cost of testing for phosphorus for three samplings this year, but that is after the group had been previously turned down for sampling grants by the DNR.

“We were the first ones ever turned down,” Utesch said. “And we did get a grant from the LNRP, the Lakeshore Natural Resources Partnership. Other than that, we’ve been completely self-funded by citizens here in Kewaunee County.”

Besides securing funding for the monitoring program, Utesch said it is a challenge for the volunteers to conduct the sampling month in and month out.

“We’ve had different people through the years,” he said. “It takes half a day to do it. Everyone has their own lives. Nobody gets paid. It’s all voluntary work. Unfortunately, if we don’t do it, it won’t get done. The people who are doing it are committed to getting it done. All of our people are phenomenal at doing it. We are continuously looking for new volunteers to help, and while the community here is phenomenal, we always need more money to do things. From year to year we’re worried if we will be able to continue to. Somehow the money shows up and we are able to continue doing it.”

You can see all the water sampling results for all three rivers at restorekewaunee.com.