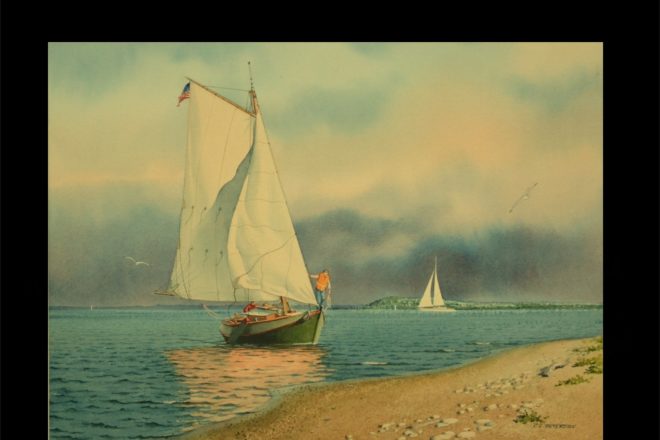 In the spring of 2015, the anthology Soundings: Door County in Poetry was released. The book was edited by the Door County Poets Collective, which Estella Lauter founded during her tenure as Door County’s poet laureate. One thousand copies were printed, and almost all have been sold.

Poets whose work was included in the anthology were both local and visiting writers. Their poems featured iconic locations such as Cave Point and Peninsula State Park, along with recognizable buildings, businesses and people. The Hickey brothers, the Holiday Music Motel and plein air painting were among the topics of poems in Soundings.

The Poets Collective is now undertaking a second anthology, tentatively titled From the Heart of Door County. Whereas the first focused on well-recognized aspects of the county, this one will look at the “interior” of the county to reveal its heart: the places, people and activities that the casual visitor may never see.

Soundings was intended to be a one-time project of the collective, but during the years that have followed its publication, members have seen an interest in creating another collection. During a recent conversation, Lauter reflected on the first anthology and discussed the motivation for the second.

“As we read the poems that were submitted and chosen, we kept thinking of what was missing,” she said. “Door County has so many layers! We hope that poems will uncover some of the layers that are not accessible through visual art, and that our project will open up space for younger poets and diverse perspectives. We want to hear as many voices as possible.”

The collective hopes that the new anthology will explore the less-well-known waters and landscapes, arts and folk arts, musical and theatrical experiences, ethnic histories and customs, unusual buildings and institutions, occupations and avocations, and controversies and passions that create a vibrant culture despite substantial differences among the people who live here or visit frequently.

At its best, poetry reveals the heart of the poet and, often, the times in which the poems were written. This new anthology will reveal the heart of the place we are all proud to call home.
Interested in submitting poems for the anthology? Emerging and established poets are invited to send one to three poems by midnight on Dec. 31, 2019, to [email protected]. Find complete guidelines at writeondoorcounty.org/door-county-poets-collective-call-for-poems.