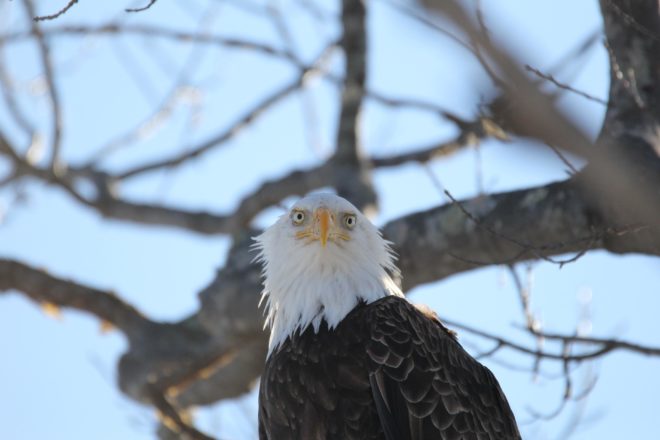 A Bald Eagle in Door County. Photo by Jason Orsted.

It’s a wonderful privilege to have an encounter with one of the many birds of prey here in Door County: seeing a Bald Eagle, Red-tailed Hawk, Turkey Vulture or Kestrel, or hearing the call of an owl late at night. The opportunity to do so is quite common now, but it hasn’t always been that way.

As a kid growing up in the ‘60s, the sighting of a bird of prey was a special treat. On Sunday mornings after church, mom, my brothers and sisters, and I would pile into the station wagon, and dad would take us for a drive in the country. One of the highlights of the weekly ride was spotting a hawk perched in a tree waiting for his lunch to come out of hiding. Dad would stop the car beside the road, break out the binoculars, and if we were lucky, we’d all get a close-up look. Yup, it was that special to see a hawk back then.

Nowadays, a trip down the highway, or through the country, will usually produce many sightings of birds of prey. Why the change?  What’s the reason for the Renaissance of the Raptor? There are many reasons. Agricultural land set aside for animal habitat. Selective logging, and the preservation of aging and mature stands of forest. Man-made nest sites. But two main reasons stand out from all the rest. The first is the discontinued use of caustic pesticides, primarily DDT.

DDT (Dichlorodiphenyltrichloroethane) is a pesticide that was widely used as an insecticide for the control of disease carrying pests, such as mosquitos. Its successful use overseas before and during WWII led to a high level of commercial, municipal, and agricultural use here in the United States. As early as the late 1940s and early 1950s scientists had begun expressing concern about the potential hazards of its widespread use. Then a book called Silent Spring was written by a marine biologist and conservationist, Rachael Carson. Published in 1962, the book suggested, from scientific studies and anecdotal conclusions, that the unchecked release of large amounts of pesticides like DDT and other chemicals into the environment was a threat to wildlife. And that sure threat to wildlife would in turn become a threat to the human population as well. Although met with strong challenges from the chemical companies of the day, her book had been taken into the hearts and minds of the general public. Carson died in early 1964 before she could see the full affect her book had on our nation, and the world. Silent Spring is now regarded as a signature event in the birth of the environmental movement. Through the grassroots uprising of early environmentalists, the highly toxic pesticides came under fire. In early 1969, Wisconsin declared DDT to be a hazardous pollutant and strongly recommended that its use be ended in the state. On February 13, 1970, its use was officially banned here in Wisconsin. Hooray Cheeseheads!  Soon after, many other states followed suit, and on June 14, 1972 the federal government banned the commercial and agricultural use of DDT. 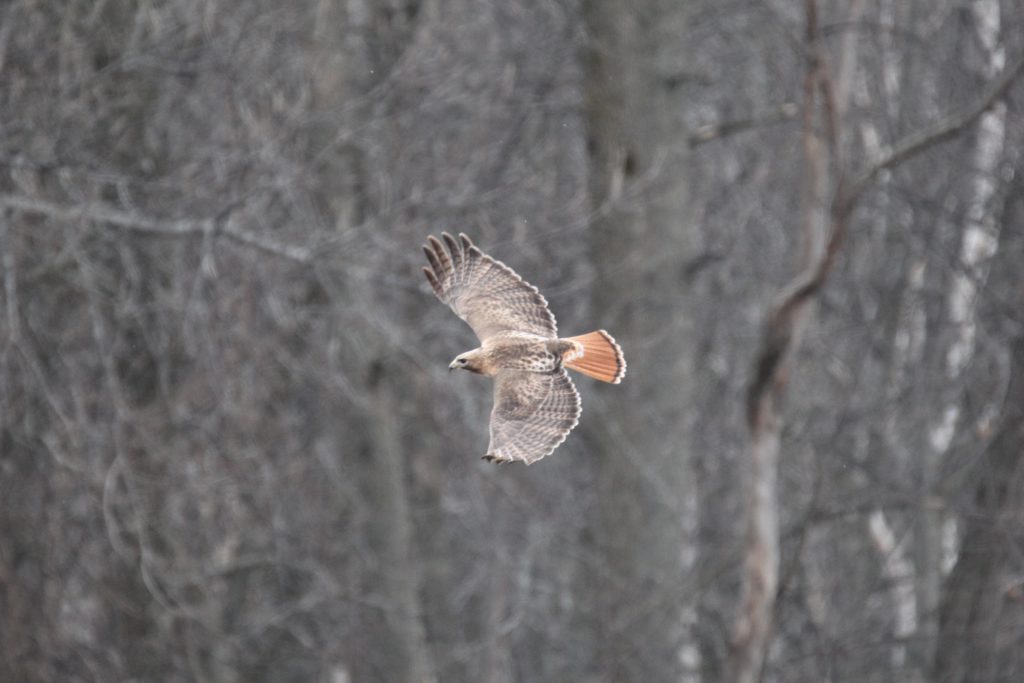 As significant declines in populations of predatory birds had become apparent, scientific studies were conducted on the effects of DDT on their populations. DDT, a chlorinated hydrocarbon pesticide, tends to concentrate as it moves up the food chain. It accumulates in fatty tissues when ingested, and levels of toxicity increase as they continue up to predatory birds. This process is called “bioconcentration.” Each bird of prey ingests only a little DDT per day from the animals it eats, but keep the toxins it gets, and it lives many years. The effects of high DDT toxicity in birds of prey do not usually kill the bird outright. Rather, it alters the bird’s calcium metabolism in a way that results in thin eggshells. The thinned eggshells are unable to support the weight of the incubating parent bird, and are crushed. Shell thinning resulted in the extermination of the Peregrine Falcon in the eastern US, caused significant declines in populations of Bald and Golden Eagles, as well as declines in many other raptor species. If not for the efforts of Rachael Carson and those that followed her, our raptor populations may still be facing those same lethal challenges.

The second main reason for the recent significant rise in raptor populations is protection. In 1918 the United States entered into the Migratory Bird Treaty Act (MBTA). In partnership with Great Britain, who was representing Canada, the treaty sought to protect migratory birds in North America. Unfortunately, the original versions of the MBTA did not include raptors. Over the years, additional countries joined the treaty. It was not until 1940, though, that the first raptors were added to the list of protected birds. That was the Eagle Act, and it gave protection to Bald and Golden Eagles. Still unprotected, hawks and owls could legally be hunted, poisoned, captured, exterminated. Finally, in a 1972 amendment to the MBTA, all raptors were covered by its blanket of protection. Now, and finally, these magnificent birds would get the opportunity to flourish. Protected, and in an environment that, although still tarnished from the residues of rampant chemical use, was on the mend and healing.

It has taken a long time for the environment and its top predators to recover. But it is happening, and in a clearly visible way. Those Peregrine Falcons that had been exterminated from overexposure to chemicals? There are now actively breeding Peregrines in every single state east of the Mississippi. Bald Eagles? Recovering from a population low of 103 nesting pairs in Wisconsin in 1973, there is now a record high population of 1,504 known nesting pairs recorded in 2016 here in the Dairy State. Door County can claim 18 of those nests. And it’s not just scientific studies that show us that raptor populations are on the rise. A car trip through the country, time spent hiking, biking, or kayaking through the natural areas of Door County, or just an occasional upward glance, will surely reward you with a sighting of one our many resident species of birds of prey. So get out there, bring your binoculars and camera, and show your appreciation for the “Return of the Raptors!”

Rob Hults is a naturalist and conservationist here in Door County. He is a founder and executive director of Open Door Bird Sanctuary (ODBS), located in Jacksonport. For more information on ODBS visit opendoorbirdsanctuary.org. Watch for future articles by Hults highlighting specific species of our Door County resident raptors.