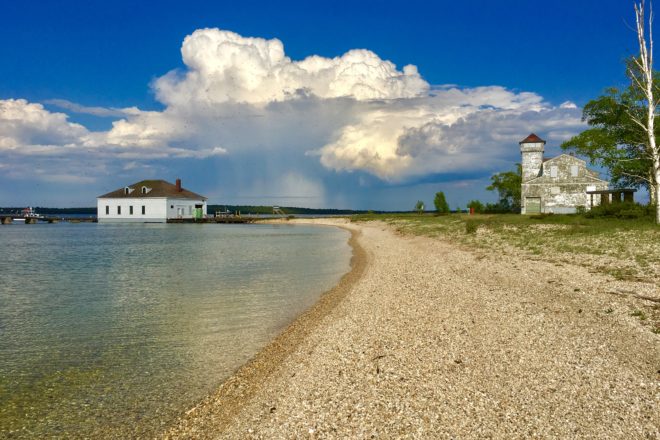 For years, the ferry trip between Washington Island and Northport quietly passed by Plum Island’s dilapidated lighthouse and coast guard facility. Last week, a newly finished dock opened the historic island to the public and a group of birders were the first to visit.

On June 3, a group of 11 residents, visitors and members of the Friends of Plum and Pilot Islands (FOPPI) headed across Death’s Door with Jim Robinson of Shoreline Charters, who sponsored the trip along with the U.S. Fish and Wildlife Service (FWS). 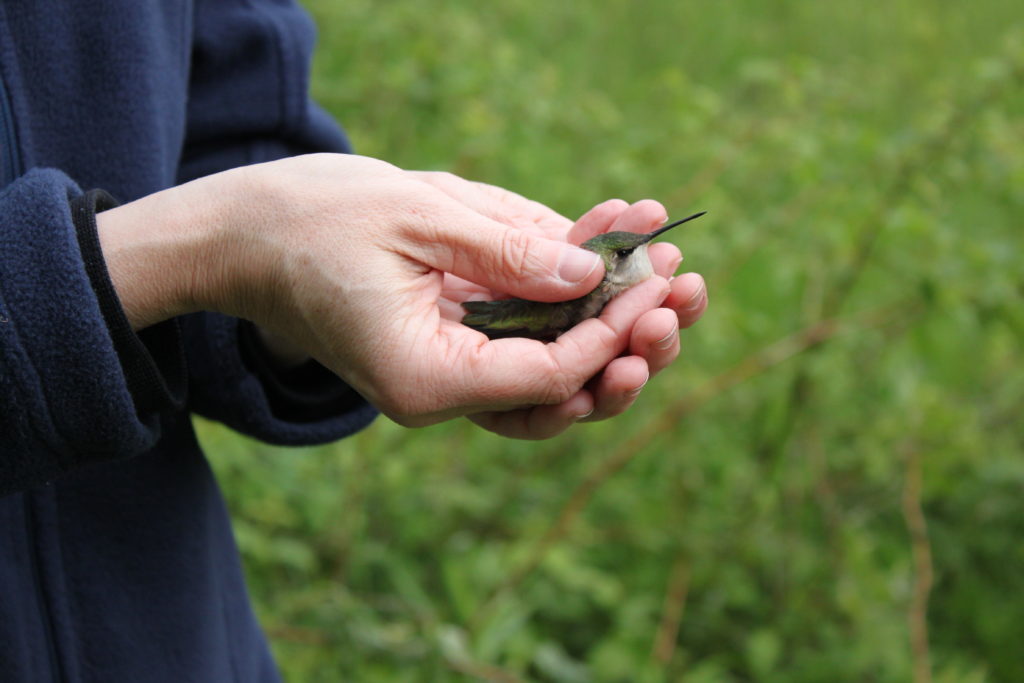 “While there has been a fair bit of human activity on this island going back to the mid-1800s, it’s been only the lifesaving station and the lighthouse and there has never been any other development on the island so it’s now returned in many ways to its earlier days in terms of the environmental habitat,” said Gordon Vieth, FOPPI member.

Standing in a circle near the nets, FWS bird expert Sarah Warner was constantly interrupted by the chatter and song of nearby birds. With each chirp, she couldn’t help but detail which species it was.

“There’s a Song Sparrow back here,” said Warner. “It’s doing an agitated call so what that makes me think is that we’re probably near its territory. 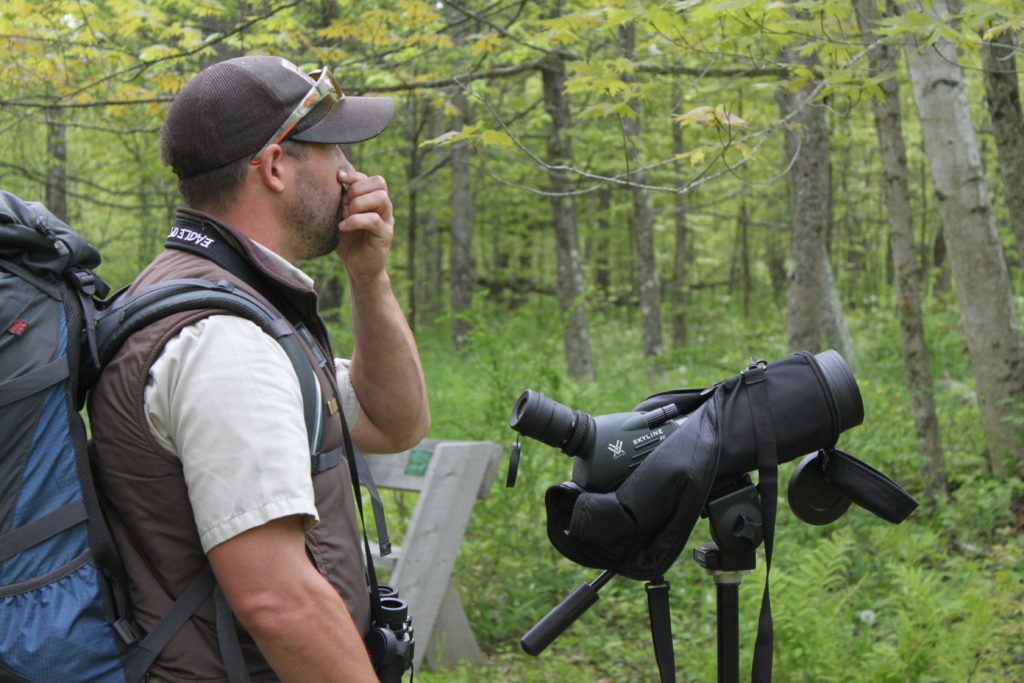 U.S. Fish and Wildlife Service Ranger Dustan Hoffman sets up a scope to view an abandoned eagle’s nest in the trees of Plum Island. Photo by Jackson Parr.

“Birds have a really wide vocal capability so there’s songs for many reasons. When there’s a predator nearby a chickadee does a B note, if any of you are musicians, and they’ll sing a B over and over and over again. Then other chickadees start singing a B too and what that is, is a warning to all the other birds that a predator is in the area. So they’re amazing musicians.”

Warner is one of the few FWS employees licensed to tag birds for research purposes. In order to receive her license, she had to spend three years training under another professional. Now, she carefully reaches in the belly of one of the tall nets and pulls out a tiny hummingbird.

The FWS does not tag hummingbirds, but if they come across other species, they take a small metal ring with information such as the location and date stamped on it. Holding the bird by the hand, she uses pliers to clamp the ring around the bird’s leg. When the bird dies or is recaptured, the FWS can collect data on migration routes.

Open to the Public 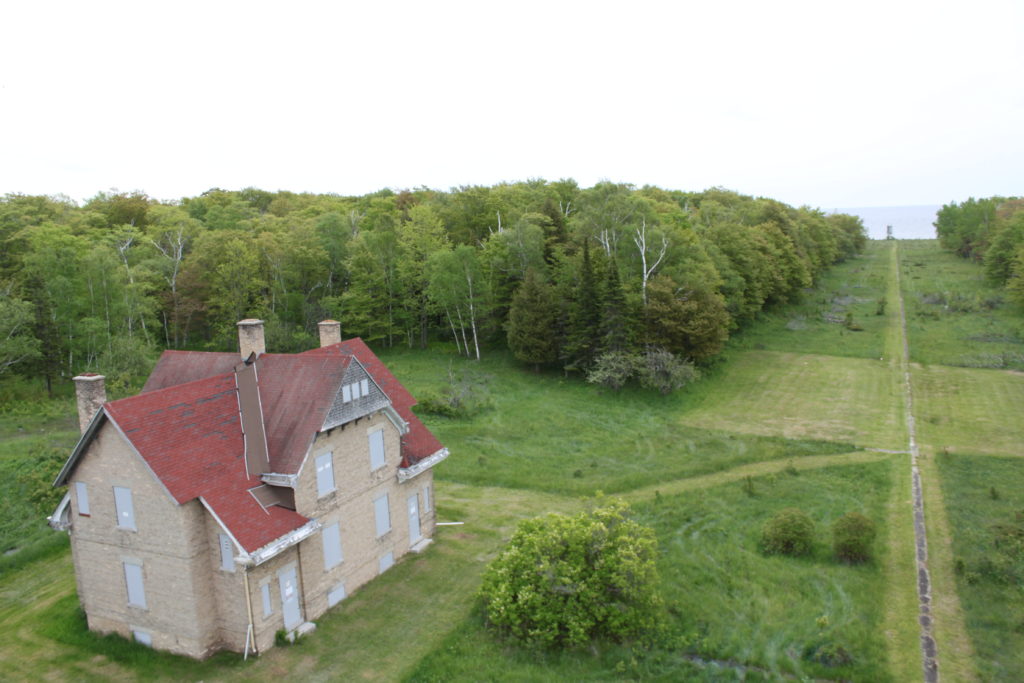 The view from atop the Plum Island lighthouse includes the U.S. Coast Guard station and the second range light off in the distance, used to guide ships through Death’s Door. Photo by Jackson Parr.

While most attendees were avid birders, they were still interested in the other attractions of the newly opened island.

The public now has its first chance to freely visit the island as FOPPI completed fundraising and construction of the boat dock on the north side of the island near the boathouse and lifesaving station.

“Until 1992 this was owned and managed by the U.S. Coast Guard and then in 1992, by that time the navigational aids had been automated,” said Vieth. “After some years of government wrangling and indecision about what to do with these areas, these islands then became part of the wildlife refuge in 2007.”

Hoffman has big plans for the island now that it is open to the public.

“People are going to start coming out here this year because it’s the first year that the dock is open for use,” said Hoffman. “We want to allow for an opportunity like on Rock Island where we allow people to come out and be a docent and stay for a week in the [lifesaving station].” 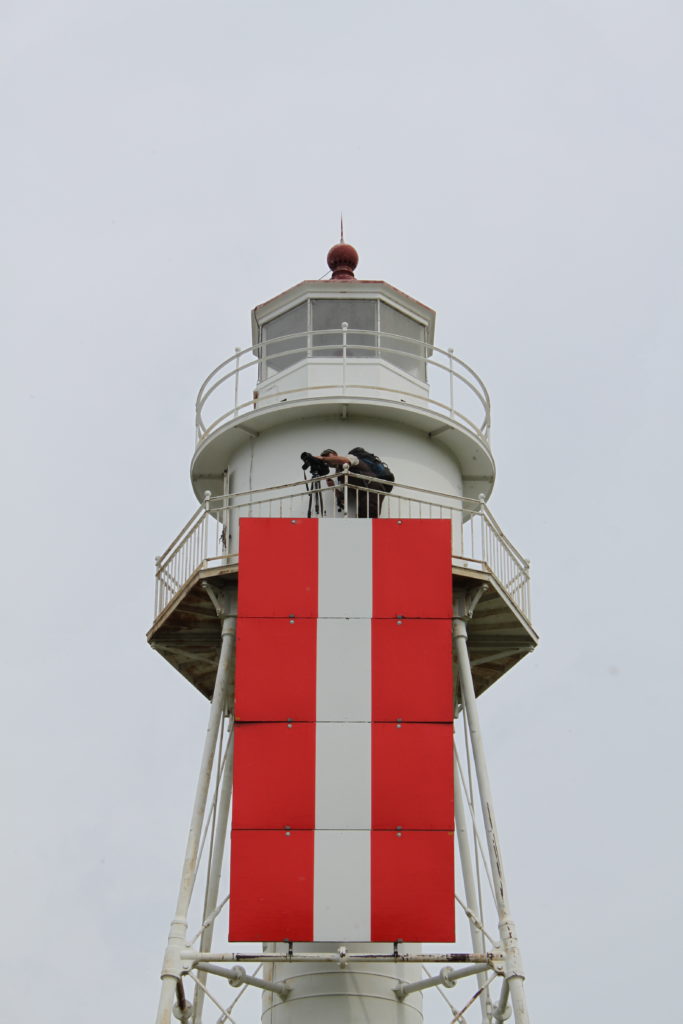 Dustan Hoffman sets up a scope on top of the Plum Island lighthouse to get views of Spider Island. Photo by Jackson Parr.

Right now, the lifesaving station is in disrepair. Built in 1896, estimates for historic reconstruction are $1.6 million, but its unique construction may shine a brighter light on a fundraising effort.

“That’s a Duluth-style lifesaving station,” Hoffman said. “There were 16 on the Great Lakes at one point and roughly 32 or 33 throughout the entire country. There are now four remaining and only one on the Great Lakes and this is it. So, a lot of maritime buffs want to preserve that structure.”

FOPPI funded a complete report of the estimated costs to reconstruct all the buildings on the island, including the lighthouse, coast guard station, boathouse and remaining unfinished docks. They expect to receive that report sometime this summer.

Hoffman also hopes to allow permitted camping on the island in the future.

Until then, private boats are free to dock during daytime hours and Robinson expects his Shoreline Charters will begin offering tours to the island in the next few weeks. If Hoffman is available, he is happy to give tours around this new piece of history.

What is the U.S. Fish and Wildlife Service?

Dustan Hoffman is a park ranger with the U.S. Fish and Wildlife Service stationed at the Green Bay National Wildlife Refuge. He admits that not many people know exactly what that means and he hopes opportunities for the public to visit places like Plum Island will get their name out there a little bit more.

“The only place you would see us typically is maybe a courtroom defending a case,” said Hoffman. “We enforce the Endangered Species Act and we also enforce the Migratory Bird Treaty Act. The other place you might see us is border patrol or maybe at the airport, confiscating goods that are coming from other countries that we aren’t supposed to be a fan of like elephant ivory or feathers, jaguar claws.”

There are 566 wildlife refuges in the United States. Five of them are managed out of the office at the Horicon National Wildlife Refuge. Hoffman lives on Washington Island while managing the Green Bay refuge and Gravel Island.

“Gravel Island is just two islands off the east side of the peninsula,” said Hoffman. “Which is the only Caspian Tern colony on Lake Michigan so it’s very important. They are very sensitive colonies for nesting so we don’t have those open to the public.”

The Green Bay refuge has grown significantly in the past decade. Established with only Hog Island back in 1912, Plum and Pilot islands were added in 2007. St. Martin Island and Rocky Island, both located north of Washington Island in Michigan were added in 2015.

While the Fish and Wildlife Service deals mostly with science and enforcement, Hoffman is happy to be in visitor services, spreading the word of the unique and important lands that the service protects while welcoming the public to experience them firsthand.