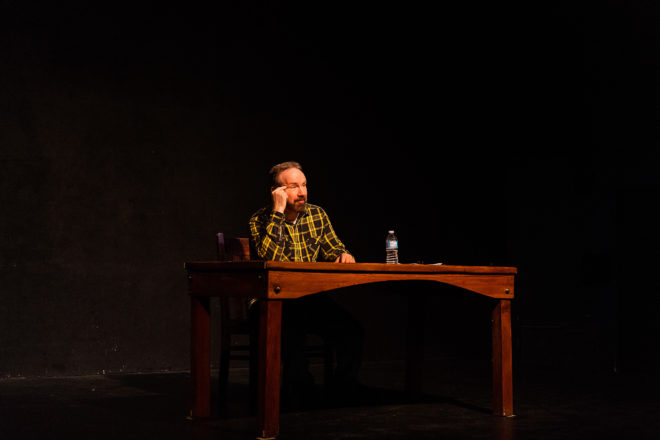 It isn’t often an actor is cast as a character whose most traumatic experiences mirror their own. In Doug Mancheski’s case, it was almost as rare as the medical condition he lived with and which establishes the plot of Gray’s Anatomy, opening this weekend at Third Avenue Playhouse.

An autobiographical monologue by the late American actor and writer Spalding Gray, Gray’s Anatomy explores Gray’s experiences as a middle-aged man whose body is breaking down in alarming ways. His most immediate concern, on which the play is built, is an eye condition called macular pucker. As explained by the National Eye Institute, a macular pucker is scar tissue that forms on the eye’s macula, the part of the eye responsible for providing sharp, central vision that’s needed for reading, driving and seeing fine detail. A person with macular pucker can experience blurred and distorted central vision, usually in one eye.

The condition can be corrected with surgery but in 1994, when Gray’s Anatomy was published, that surgery came with a 1 in 100 chance of becoming blind. To avoid those chances, Gray – described as the “high priest of high anxiety” – pursues any and every alternative solution he can find, including a visit to a Native American sweat lodge, a Christian science practitioner, and a psychic surgeon. The comedy follows his quest for a cause and cure for macular pucker, with an undercurrent of thoughtful musings on disease, aging and mortality.

Assuming the role of Gray for the Third Avenue Playhouse production has been an autobiographical experience for Mancheski, who suffered from macular pucker before the condition was corrected with high-risk surgery three years ago. Like Gray, Mancheski “could not find anyone who knew about it.”

“What happened to me in the matter of six weeks, I went from 20/20 vision to 20/70 in my left eye,” Mancheski said. “I freaked out. It’s not so much blurry, it’s distortion. The whole room was turning, there’s no straight line.”

It took multiple doctor visits before Mancheski was diagnosed with macular pucker. After weeks of avoidance, Mancheski elected to have surgery (his odds of going blind from the operation – 1 in 1,000 – were much improved over Gray’s) and got the vision in his left eye back to 20/25. But Mancheski admits he “is still scarred from that surgery.” Understandably so, as the patient is required to be awake during a procedure that goes into the deepest part of the eye to remove the vitreous, the eye’s clear internal jelly, and the scar tissue that causes the condition. Mancheski later underwent cataract surgery, a common side effect of macular pucker surgery.

The operation is just a blip in Gray’s Anatomy, which focuses on the grander, existential crises that arise in the wake of the medical condition.

“People will be able to relate to this so much because everyone’s gone through this odyssey, especially 50s and 40s,” Mancheski said. “Things are breaking down.”

Humor and introspection are woven throughout the play. Mancheski, on stage with just a table, chair and glass of water and aided by sound cues, plays 27 characters, from doctors and nurses to prostitutes and Gray’s longtime girlfriend. The story is grounded in Gray’s objectivity, reflecting a reporter-esque tendency in his monologues.

“It’s not stand-up comic humor, it’s very much a human comedy,” co-artistic director Bob Boles said. “Spalding searches for the humor in the absurdity of life wherever he goes. He constantly sees the contradictions that are going on around him all the time and he sees it within himself too. He can be freaking out over this, going to different doctors, and look at himself from the Third Eye, so to speak, and come back and report to us almost objectively what he’s going through.”

In Third Avenue Playhouse’s production, Gray’s personal monologue is enhanced through a rare opportunity to blur the lines between actor and playwright.

“Gray writes these very personal stories, personal monologues,” Boles said. “The way they work is they have to work as a personal story. You have to buy into the fact that whoever is telling the story is the person who lived the story and that’s almost beyond acting sometimes. It’s not assuming a character so much as finding that story within yourself and telling the story. In essence, it’s Doug telling his own story here and his own journey and where he took this…It takes you through the whole rollercoaster journey and it’s fascinating. It is funny but it’s very human.”

Gray’s Anatomy is on stage through April 22. Performances are Thursday through Saturday at 7:30pm and Sunday at 2pm. Tickets are $28/adult, $12/student. For more information or to buy tickets visit thirdavenueplayhouse.com. To purchase tickets from the daytime box office, call 920.743.1760.