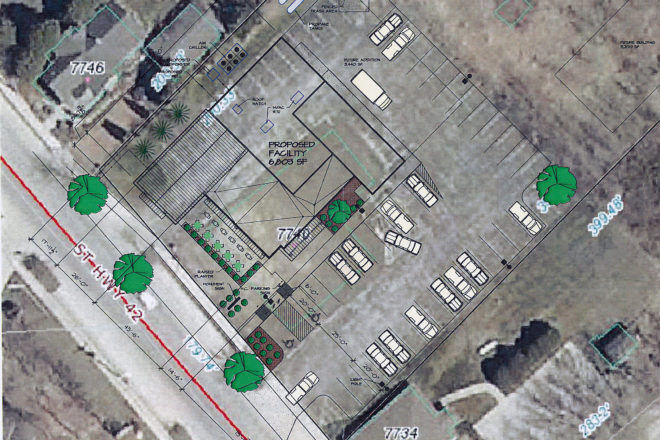 The Village of Egg Harbor Plan Commission heard an initial outline of a proposal for a distillery to be located on the former Lena’s property. Submitted.

Just two days after the iconic Shipwrecked Brewpub burned in the heart of the Village of Egg Harbor, the village Plan Commission heard on Aug. 22 about a distillery that wants to open just down the street on the long-vacant Lena’s property.

Chris Roedl, the entrepreneur behind the Hatch Distillery, and Mark Nysted of Keller, Inc., the builder, presented details to the Plan Commission as they pursue a conditional use permit from the village to proceed with the plan.

“It will be retail, tasting and full-service craft cocktails,” Roedl told the Plan Commission.

Roedl said he has had his eye on the Egg Harbor property for about a year, and explained that the name of the distillery alludes to his family’s background in the produce industry, and, of course, the link to the village name.

“Our hope is to build a beautiful space that compliments and enhances the Door County experience,” Roedl said. “Our mission is to craft fine spirits that celebrate people, place and time. We will be doing it differently, and we will do it right. While other distilleries buy base spirit in bulk from large factory suppliers, we will partner with honeybees and local sustainable family farms to make honest products sourced and distilled right here in Door County.”

Roedl explained that the company already owns 25 beehives, so will produce mead that will be distilled into vodka and gin. He will also produce liqueurs and grain-based gin, vodka and barrel-aged whiskeys.

While Nysted said he did not have detailed renderings of the building, there will be a lot of glass on the front so you can see the distilling tanks from the highway. The tasting room will have space for 20 spots at the bar, he said. Five people would be employed full time.

Nysted added that they would like to start construction around Halloween, and Roedl said he would like to open the doors next July.

Both men satisfactorily answered questions from the Plan Commission about noise levels from an air chilling unit (no louder than a typical air conditioner, Roedl said, adding that he could provide decibel data for the unit), truck deliveries (they will be made in the back of the building) and wastewater amounts (less than a 100-seat restaurant, Roedl said).

Commission member Joe Smith seemed to sum up for the group when he said the project certainly fits in with the village enhancement plan, and that a destination business at the south end of town on an empty lot will help extend the length of the village. “It can only benefit Liberty Square, which is right across the street,” he added.

A public hearing will be scheduled on the proposal before the village makes a decision.

Kollin Orthober would like to bring three “man camp” housing units to Egg Harbor to be used as workforce housing. Submitted.

Kollin Orthober plans to buy three “man camp” units – 30’x76’ ranch-style homes with 12 bedrooms and six bathrooms per home, all fully furnished – from the oil field camps of North Dakota, which have been hit by the oil slump.

Orthober said he has already been in touch with Bay Shipbuilding about his “man camp” temporary housing units, and said he could keep the three units full year-round with shipyard workers. However, he needs a location for the units, and said if Egg Harbor would provide him with space, he would relegate shipyard workers to winter months and open the units to summer seasonal units for workers in Egg Harbor and beyond. Egg Harbor businesses would have first chance to locate their workers in the units.

“The bars around here would love it, obviously,” Orthober said.

“I don’t know if I want shipbuilders from Alabama running all over Egg Harbor,” said commission member Joe Smith. “I feel horrible thinking like this.”

Orthober said the shipyard tenants would be renting by the week, so if anyone acts up, they are out.

He added that if the village agreed to provide space for the three units, he would want businesses to commit to a certain number of rooms.

Smith suggested the village land near the wastewater treatment plant that was considered for a workforce housing project that fell through a couple years ago would still be an option.

“The aesthetics wouldn’t matter because you can’t see it from the highway,” he said, adding that the units don’t look bad but are very bland looking.

Orthober said he expects the weekly rental for businesses to rent rooms for seasonal employees would be between $125 and $150 a week, utilities included.

The total project cost on his end to transport the units from North Dakota and install them in Door County would come to about $500,000, or half of the earlier workforce housing project proposed to the village. Orthober said he would expect the village to help by providing the property, waiving hookup fees and anything else they can do to help make it happen.

If approved, Orthober said he could have the units ready by next spring.