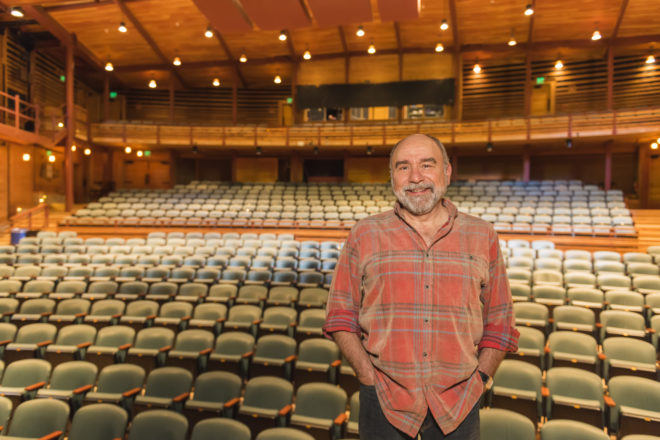 Greg Vinkler stands on stage of Peninsula Players Theatre in Fish Creek. Vinkler is an actor and artistic director with the organization. Photo by Len Villano.

Chicagoan Greg Vinkler was a college sophomore when he first found his home in theater. According to Vinkler, it was in that introductory class for non-majors that he felt for the first time he truly belonged somewhere.

“It was like putting on a glove that fit me really, really well,” he said.

Vinkler has pursued theater ever since, from coast to coast and across the globe in cities such as Vienna, London and Singapore. Yet here in Door County, he has made the theater his home in another, more literal way — by spending summers for the past three decades in Fish Creek working, eating and living with his fellow Peninsula Players. Already an accomplished actor and director when he arrived in 1988, Vinkler has since boasted an ever-increasing host of roles in show business, including, of course, his current role as artistic director of the Players.

It was not long after Vinkler first came that then-artistic director Bob Thompson and producer Jim McKenzie began phasing him into the position, though Vinkler did not realize it at the time.

“It was a very gradual process,” he said. Yet despite gaining the title in the 1990s, it was not until 2007 that he took on the full weight of the role’s responsibilities, with no executive producer to aid him.

Managing Director Brian Kelsey still handles the business side (budgets, contracts, etc.), but for the past decade, Vinkler has managed on his own the mammoth artistic tasks of choosing the upcoming season’s five plays and hiring the cast and crew for each.

The task of picking the plays is a balancing act, and Vinkler confides it is difficult feeling the pressure of each year. Of course, he must appeal to the Door County audience — which, though largely tourist based, still includes attendees interested in “more serious stuff” — as well as the performers themselves. Additionally, Vinkler strives to maintain a variety of genres and tones throughout the season. Personal taste comes in as well.

Vinkler loves plays with a lot of heart. He also always finds ones that tell great stories, and if they employ distinctive storytelling techniques too, even better:  The Actuary, for example, performed this past season, moves backward in time after the opening scene. The same piece also satisfied another of Vinkler’s personal penchants, an uncommon one for summer stock theaters — taking on the challenge of producing world premieres.

After the play choices are set, Vinkler starts the process of hiring actors, actresses, directors and stage managers, along with separate designers for set, props, costumes, light and sound. With every position, he looks for candidates who have a lot of talent and are also “good campers.”

“Talent” may sound obvious, but Vinkler has a particularly rigorous definition of the word.

“My approach,” he said, “has been to make this theater and the work it does as good as any regional theater anywhere” rather than remain content with typical summer fare.

Furthermore, performers in particular must not only possess great theatrical ability but great theatrical flexibility:  because of the Players’ equity contract, most cast members must act in two or three of the summer’s plays.

Both cast and crew must exemplify another sort of flexibility, too. Vinkler explains how the “camper” thing is crucial because of the special living situation at their theater:  when you not only work in a team but also eat every meal together and live in the same space, “one bad apple can have a ripple effect on the company.” Performers, managers and technicians alike must be able to handle this very concentrated professional and social situation with grace. 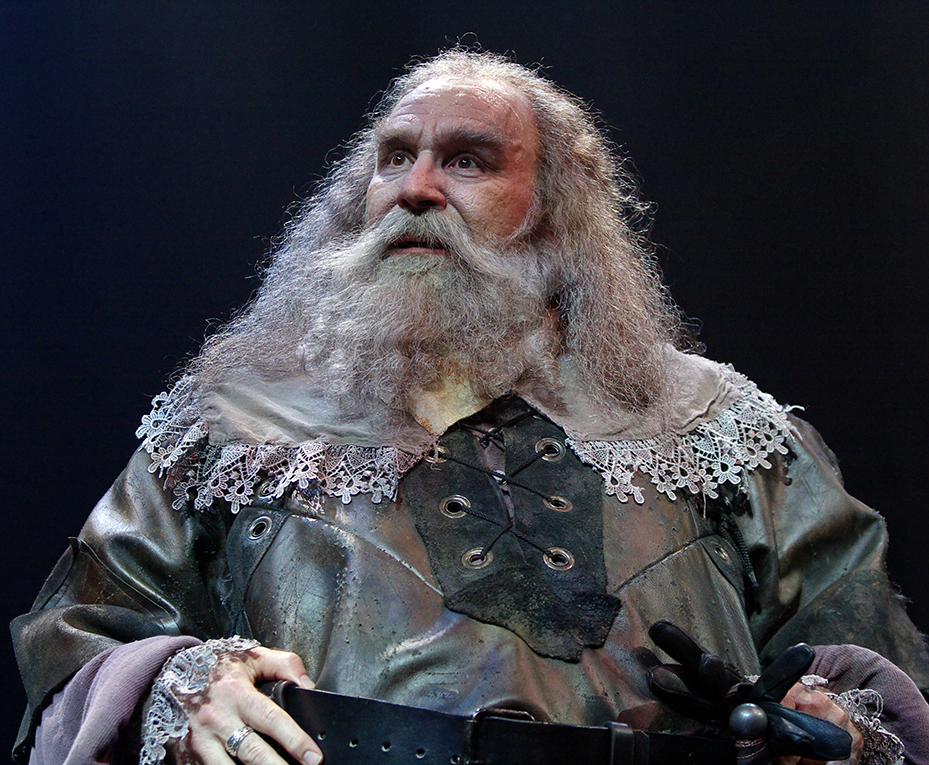 In 2005, Greg Vinkler played his all-time favorite character of Falstaff in his favorite playwright’s hometown of Stratford-upon-Avon. He still wears Falstaff’s ring from this production on a regular basis. Director Barbara Gaines mentions that in this role, she “forgot that he was an actor on stage…he was so alive and in the moment.” Photo courtesy of Chicago Shakespeare Theater.

In recent years, Vinkler has taken on more off-season responsibilities with the Peninsula Players by leading “The Play’s the Thing,” a series of play readings hosted at Björklunden in Baileys Harbor from February to April. He picks one play in conjunction with the book for Door County Reads, while the others are plays not suitable for their summer season or which he would like to test out on audiences before bringing to the summer stage.

By all accounts, Vinkler has performed his many duties as artistic director admirably year after year.

“He does exceptional work all the time,” said Kelsey, citing how Vinkler listens to ideas from all levels, understands his audience, and creates an environment where people want to return.

Barbara Simpson Fuhrmann, who acted with the Players (and Vinkler) in the early ’90s and now serves on the board, said, “In the early years that I was performing, it was a well-respected theater, it’s always been, but the professionalism has only gone up and up and up.”

On top of all these responsibilities, Vinkler has continued acting in and directing his own productions and play readings, with the Players and other theaters. He even starred recently in a short film. Although he enjoys acting and directing, Vinkler confessed, “If I was born to do anything, I was born to act.” Others agree, marveling at how the great study and soul he puts into every character render him so utterly convincing in his roles.

Truly, Vinkler’s own extraordinary talent and experiences as an actor and director are huge factors in his success as artistic director. They benefit him in terms of being aware of what other theaters do, what can be done, as well as knowing talents.

“A lot of the casting I can do from people I already know,” he said.

Vinkler admits that during his career he has become critical and expects people to meet high standards.

Yet Barbara Gaines, founder and artistic director of Chicago Shakespeare Theater and Vinkler’s director in dozens of plays, claims everybody loves working with him precisely because he raises the bar. She remembers that he was “a chameleon” with “huge versatility” when she first hired him for three roles in Antony and Cleopatra in 1988 (the same year Vinkler started with the Players), and now she considers him in the master class of acting.

“He’s in that handful of actors that you always consider it’s an honor to have him in the room with you,” she said.

In fact, Vinkler credits much of this theatrical skill to his 47 (and counting!) Shakespeare performances in Chicago and elsewhere.

“I believe if you can do Shakespeare, you can do anything,” he said. “He just demands everything of you!”

It helps too that just as Vinkler himself possesses the talents he seeks, he also has those “good camper” qualities, in abundance: he is easy to work with, according to Kelsey; a giving person, according to Fuhrmann; and sweet, warm and funny with friends everywhere, according to Gaines. Even ushers at the theater remark on how witty, welcoming, nice and humble Vinkler has always been off stage in addition to being one of their favorite actors to watch on stage.

Finally, one other factor in Vinkler’s success as artistic director, actor and director may well be what he takes to be his greatest duty and ultimate purpose in theater.

Vinkler believes the arts should remind us that we share a common humanity; they should inform and challenge us but more essentially touch us, console and inspire us, impress upon us how we are all connected. And theater, he asserts, is uniquely capable of this because it is so personal.

“There’s something magical,” he said, “about seeing the actors performing for the people, doing it for them.”

That human connection is palpable, “live and visceral,” because here the artists are affected by their audience — their laughter, their tears, their silence — just as their audience is by them.

It is remarkable that a man of so many accomplishments — who Shakespeare himself might say leaves “no day without a deed to crown it” — also manages to show such care in everything he does and for everyone he encounters.