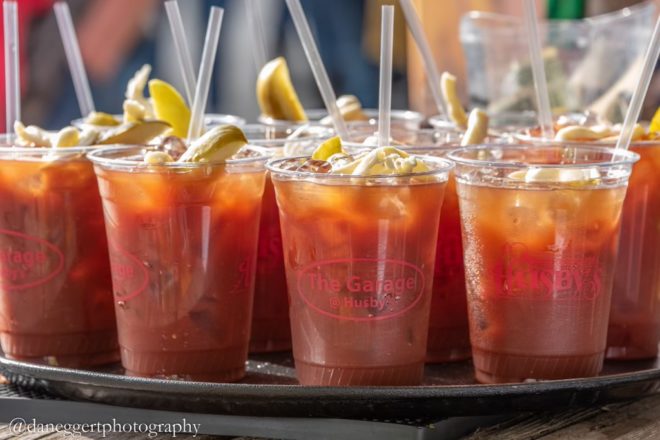 When you order your Bloody Mary at the outdoor bar at Husby’s on Fall Fest Saturday morning, it may look like a simple process to fulfill your order: The bartender turns to grab a freshly salted drink off the table and trades it for your cash within a few seconds.

But the journey for that drink started several days earlier, when the crew at Husby’s started organizing the influx of supplies arriving throughout the week to prepare to serve a couple thousand glasses of the unofficial drink of Fall Fest.

The process kicks into high gear on Thursday, when six to eight workers get started on making 150 gallons of mix.

The recipe is largely the same as it has been for more than three decades: Sacramento tomato juice, Tabasco sauce, Lea & Perrins Worcestershire sauce, horseradish, a little A.1. steak sauce and a little pickle juice.

“We don’t use substitutes because having all those good ingredients makes all the difference,” Larsen said.

The drink has always been popular at Fall Fest, said Delmar “Pickle” Olson, who owned Husby’s from 1979 to 1991, when it was a dive in every glorious sense of the word. But the Bloody became “a thing” with the promotion of Arlyn “Oscar” Johnson when he bought the bar in 1991.

Johnson built a huge outdoor Fall Fest bar to wrap around the garage adjacent to Husby’s (now the Garage Bar, but then a sign shop) and started pumping out Bloodys by the dozen. Olson said the recipe was the same, but its billing had changed to “Oscar’s Famous Bloody Mary,” with sweatshirts to spread the word.

Johnson may not have been the mastermind behind the recipe, but he was particular about getting it right at Fall Fest. He was known to stalk the assembly line, ensuring that cups were packed with ice, watching the pour of the vodka, shouting if a Bloody was about to be served without a pickle and celery salt.

Johnson died in 2004, but his attention to detail has been passed down year after year, and on to the bar’s current owners, John Sawyer, Chad Kodanko and James Larsen. The last detail on Thursday night is getting all the ingredients mixed evenly.

“There’s always a fight over who gets to be the jug shaker,” Larsen said.

By Saturday morning, a second assembly line is hitting its stride at 9 am as thousands of revelers descend on Sister Bay to line the streets for the Fall Fest parade. One person fills cups with ice, another pours the vodka, a third pours the mix, and one more adds the pickle, celery salt and a more recent piece of flair: a cheese whip. They’re made a tray at a time, 70 in each tray, and almost as soon as the tray is full, it’s emptied by the bartenders.

“Between 9 am and 1 pm on Saturday, we never stop making them,” Larsen said.