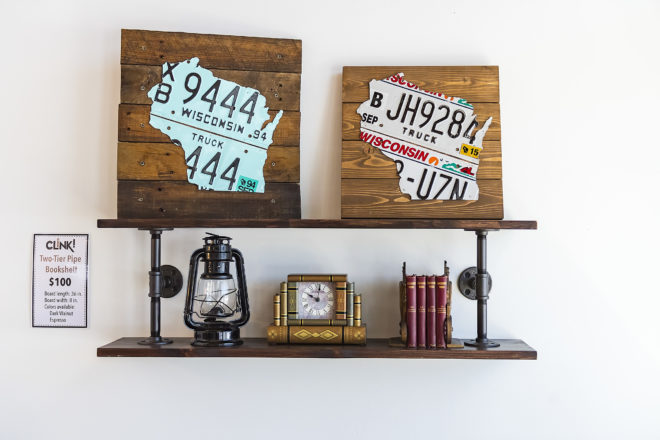 Retailers across the country are facing serious challenges with the rise of online shopping, and brick-and-mortar shopping has seen a drastic decline during the past decade. At the same time, millenials — the largest generation of Americans — are choosing to spend more on experiences than things. That makes it a daunting time for sellers of consumer goods, yet there is one industry that has begun to flourish as a result: the crafting industry.

Yes, knitting, sewing, painting and all forms of “do-it-yourself-ing” have caught on, gaining traction in this age of the “experience economy.” Just like high-waisted jeans, Grandma’s string art from the 1970s has been deemed hip once again.

Door County, too, is welcoming this trend: in addition to Hands On Art Studio, three new DIY-based studios have opened in the past two years. Visitors can now choose from several options, all offering ways to engage in creative pursuits and capitalize on this desire for interactive, uncommon experiences.

In the fall of 2017, Mike Weber and Courtney Janson were eager (and anxious) to take the first big step on their path to opening a small business in Door County. Their plans had been years in the making, and they were about to put them in motion with a commercial-property investment. Their business concept — a modernized DIY crafting studio — was a blossoming trend in major markets, and it was one they thought would work well in the seasonal village of Ephraim.

Mike, originally from the Chicago area, had been working in business logistics, and Milwaukee native Courtney had a career in accounting. After they met and their relationship solidified, they naturally began discussing future goals, quickly discovering that they had a similar long-term vision: Both of their families owned small businesses, and they, too, saw themselves eventually leaving the corporate world in search of an entrepreneurial venture.

Courtney first pitched the idea of a craft studio five years ago because she had always enjoyed being immersed in creative projects. “I remember spending an obscene amount of hours working on my scrapbook,” she said. Their vision for the company was based on the experience of creating something rather than selling a product. “We were both very interested in the hands-on aspect of projects and having an opportunity to teach people basic skills that they can then take with them,” Mike said.

Courtney had been visiting Door County with her family all her life, leading her to purchase property for herself in 2012. Mike, although newer to spending time in the county, quickly fell in love with the peninsula’s communities and atmosphere. It became the perfect place to pursue their shared small-business dream.

“At first, it was definitely somewhat of a pipe dream,” Mike said, “but we decided to try kicking the tires a bit to see if we could really turn it into something.” In the years leading up to 2017, they conducted market research, attended crafting workshops and gathered plenty of input from friends and family to solidify the idea and test its feasibility.

Their commitment to the DIY concept was becoming increasingly concrete — and justifiably so. “Between Pinterest and DIY blogs online, the crafting industry has been able to engage a wider audience than ever before,” Mike said.

The concept also promised to be a fun option for vacationers looking to do something different. “I’ve been coming up here since I was really young,” Courtney said, “and I knew there was a need for more opportunities like this in Door County. Most activities are outdoors, which obviously is wonderful, but visitors are looking for a balance, especially when you’re trying to please a group of people.”

Eventually, they enrolled in an eight-week entrepreneur training program through the Door County Economic Development Corporation that provided support in developing a business plan.

At the same time, they began looking for a suitable property. Clink! was the name they settled on, designing a logo that leaned toward neutral colors and non-gender-specific design elements. They had a full roster of self-guided projects that they were eager to introduce to crafters, including glass etching, leather goods, string art, painted signs, jewelry making and wood-burned designs.

They secured a location in Ephraim close to other amenities, and the building offered just what they were looking for: a spacious workshop area with an attached space where noncrafters could relax, play games or jump on the Wi-Fi. There was even room to include a snack-and-coffee bar, ensuring that families and groups would have everything they needed to relax and enjoy.

As they neared opening day, some unnerving news arrived: less than a mile away, another DIY-concept business was also planning to launch. Unbeknownst to either business, they had both been spending the past several months preparing for their first season of operation.

“It was a scary moment,” Mike said. “We had known there was going to be a business of some sort going in that space but didn’t expect it to be so similar. We had no way of knowing we were both planning at the same rate.”

Down the road, the Kruger family had also been hard at work remodeling what would soon become Reclaimed: part curated consignment shop and part DIY workshop. Tena and Jeff Kruger, along with their son, Collin, started the business together, with Collin heading the DIY area and Tena and Jeff focusing on the furniture and décor resale business.

Collin, a graphic designer, had been doing freelance work for website clients, but he was finding it restrictive and a bit isolating. Tena had a background in interior design and consignment. Together, they imagined opening a space that held a creative studio for vacationers and a place for shoppers to find high-quality resale items. By winter of 2017, they were well on their way, securing a commercial property, testing prototypes of projects and creating the brand look and feel. As they neared their launch, they began to share the new business with the community, including starting an Instagram account, which is where Mike and Courtney first learned about Reclaimed.

“Seeing that did make us nervous,” Mike said, “but soon enough, we met Collin and Tena, and ever since we’ve had a really supportive relationship.” They realized they had different niches and complementary offerings.

“We’ve navigated the best ways to differentiate ourselves,” Collin said, “and we often refer visitors who really love DIY or who are looking for a specific item we don’t have.”

Like Mike and Courtney, Collin recognized that consumers are looking for more experience-based options and personalized products.

“There’s a lot of food and shopping and outdoor activities in Door County,” Collin said, “but this offers something that’s a little off the beaten path for those who have come to Door County year after year.”

The DIY concept is an ideal way to provide both a fun, creative experience and a Door County keepsake. Groups especially have taken advantage of Reclaimed’s reservation system as a way to spend quality time together. People visiting the county for family reunions, girls’ weekends and as part of bridal parties have made Reclaimed a part of their itinerary. “The wedding-themed signs have been very popular with bridal parties and couples, especially if they are up here planning a wedding,” Collin said.

So far Reclaimed has focused on sign-making, with a wide variety of wood colors, font choices and design options, plus a commercial vinyl cutter available to custom-create anything customers dream up. Customers have plenty of creative freedom, which has also attracted the local business-owner community. “We’ve actually had a lot of interest from business owners who have asked how we could help them with signage,” said Collin, who had just assisted Heirloom in Baileys Harbor with its sign.

Collin has used his graphic-design skills to create Reclaimed’s gallery of sign templates and is continually looking for new trends. He’s been using these insights to plan for the new season, refreshing the gallery and adding new styles.

This year Reclaimed is also expanding beyond signs to add various décor projects: table centerpieces, blanket ladders, wooden totes, clocks and trays. There will also be a new selection of smaller, simplified projects geared toward kids.

The third DIY shop to hit the county recently is Stone Silo Studios, attached to the popular breakfast spot Rusty Tractor on Highway 42 in Egg Harbor.

Taylor Havel, its owner and founder, was an avid crafter and graphic designer before opening the studio in spring of 2017. She had been DIYing signs and home décor to sell in the gift shop attached to her parents’ restaurant. It wasn’t long before she was getting inquiries from customers about how to make and customize projects themselves.

Taylor transformed the lower section of the Rusty Tractor barn into a cozy space where she could lead scheduled crafting sessions for guests to make signs, décor, trays and seasonal items. The space also offers beer, wine and snacks to crafters during workshops and dedicates a section to selling supplies and take-home DIY kits. Workshops take place several times a week and require advance registration by website or phone.

“Customers really like being able to see their own ideas come to life,” Taylor said. “A lot of times people will sign up for a workshop because they had something specific in their mind and haven’t been able to find anything in stores like it, so they come here to just make it themselves. I think that’s what is really fun for guests, and for me to see.”

The studio greets a lot of return visitors this way, too: a person visits for one project and, not long after, has an idea for something different and returns.

In 2019, Stone Silo Studios offers several new projects to try, including Fluid Art, a paint-pouring technique on canvas, coasters or other surfaces; Stamped!, metal stamping for jewelry and accessories; and Chalk Painting 101, for the maker interested in learning a popular furniture-refinishing style.

The Original: Hands On Art Studio

When Cy Turnbladh opened Hands On Art Studio in 1998, he didn’t have smart market research that showed there was demand for experiential art.

“I’m not a visionary,” he said. “I’m one of those stream-of-consciousness thinkers. I just thought, why wouldn’t people want to come and make stuff? Who doesn’t want to do that?”

Turnbladh was a potter and thought his business would revolve around big bowls and functional items, but that soon changed.

“Someone dropped off ceramic figurines, and I thought, no way am I going to do that,” he said. “But then I thought, oh, I have a mortgage to pay.”

For 21 years, people have been creating and crafting in his ever-growing campus on Peninsula Players Road in Fish Creek. Hands On includes several studios: the art barn, metal studio, painting café and glass-fusion studio.

“Things really took off around 2006, and I give my wife, Karon Ohm, a lot of credit for it,” he said. “Karon knows what people want to buy. A few years ago, we added board painting and stuff like that as people got into that. You can’t stay static. You have to keep growing with the market, or you’ll get left behind.”

His core business remains pottery painting, but the other offerings continue to grow in popularity, thanks in part to changing visitor demographics. Early on it was heavy on families, when Hands On was one of the few experiences open year-round and family options were sparse on the peninsula.

“It’s changing now because millennials aren’t having that many kids anymore,” he said. “Fused glass is growing. Our painting lessons have become very popular. Metal-sculpture studio is becoming a general workshop. You’re always responding to what your customers want.”