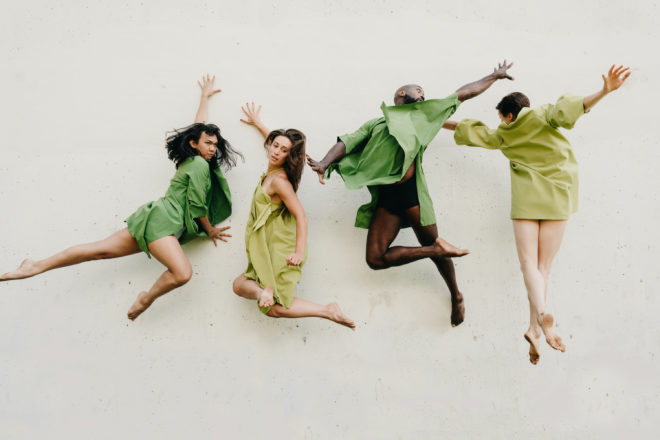 DKAF 2022 will feature the multimedia dance group The Seldoms. Photo courtesy of DKAF.

Kinetic art is a broad category, encompassing any creative endeavor that moves, according to Door Kinetic Arts Festival (DKAF) producer Alan Kopischke. And, he said, DKAF’s goal is to “celebrate and inspire” a range of media that fit under the kinetic-arts umbrella.

The sixth annual DKAF lineup reflects that aim through a performance by a Chicago-based dance company, a play reading by two Door County playwrights, a cocktail workshop by a New York Times–published mixologist, a coffeehouse comedy performance, a voguing lesson and a series of films, including dramas, experimental works and animated shorts.

In past lineups, Kopischke remembers similarly varied works, from mobiles, to the pilot of a comedy show, to an appearance by Rainn Wilson of The Office.

According to Kopischke, one of the highlights of this year’s lineup are The Seldoms, a Chicago-based multimedia dance group that performs across the country. At DKAF, its members will perform their environmentally themed work in progress, Superbloom.

The theme of that project lends itself well to the festival’s location: Björklunden, a forested retreat center on the shore of Lake Michigan in Baileys Harbor.

For many performers, DKAF is a creative getaway, Kopischke said. Many use it to connect with other performers of different disciplines, gaining inspiration from each other and the natural beauty surrounding the center as they attend public and private events throughout the week.

Still, the festival isn’t just for visiting artists. Each year, it features a mix of visitors and area residents so that as visitors get a break from their back-home lives, locals get a chance to show off their works to a fresh audience and meet artists from around the country.

Throughout the past six years, DKAF has attracted a “dedicated core of people interested in the work,” Kopischke said. That’s due in part to the dynamic nature of kinetic art.