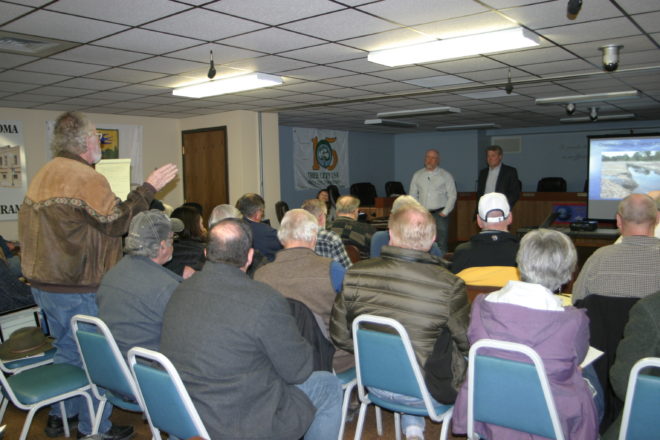 Kewaunee County resident John Rybski suggested to Rep. Joel Kitchens (in front with DNR water resources biologist Ted Johnson) that the Forestville Millpond drawdown provides a “golden opportunity” for him to do policy work on looking at streams and lakes from a watershed basis rather than within random political boundaries. Photo by Jim Lundstrom.

Rep. Joel Kitchens called the meeting to let people downstream of the Forestville Millpond know what to expect with the controversial, two-year drawdown of the 94-acre lake that will begin in November. Kitchens explained that even though the DNR is not involved in the project, Johnson has been involved in other drawdowns and could offer a scientific perspective about what to expect.

Kitchens also explained that DNR officials did not want Johnson to give the presentation “because they didn’t want him to be beaten up for it,” but he was allowed to do so when Kitchens offered to mediate. He said that after Johnson’s presentation, people could ask questions specific to the information presented.

Johnson started by saying that in his 25 years with the DNR, he has been involved with a dozen or so drawdowns, and all of them were voluntary – chosen by lake associations or counties as the best way to correct problems. (In the case of the Forestville Millpond, Door County made the decision to go ahead with the two-year drawdown because it owns the dam.)

He then gave some background on the millpond, which is included in the June 2018 report by the Door County Soil and Water Conservation Department, found online at map.co.door.wi.us/parks. The main point is that the shallow millpond – six feet at its maximum depth, but 92 percent of it less than three feet – is eutrophic or hyper-eutrophic, meaning that it has excessive nutrients and a lack of oxygen.

Because of that, Johnson said, the millpond has below-average plant diversity, with only nine species of plants when 15 is average for shallow lakes of its size. Worse, 68 percent of the plants are the invasive Eurasian watermilfoil. Although these aquatic invaders die off in the fall, their root systems survive the winter and come back strong in the spring.

Johnson said drawdowns are excellent for control of Eurasian watermilfoil, especially with cold winters without much snow because the cold kills the reproductive structure of the hardy plant. He added that with every drawdown in which he has been involved, native plant diversity was one of the results.

Perhaps the biggest takeaway from Johnson’s presentation, especially for those downstream of the millpond, is that most impoundment millponds are nutrient sinks that trap phosphorus in the lake.

He explained that the nutrients in the deep muck on the bottom of the millpond are stirred up by the carp that dominate it, as well as by wind and wave energy, and sent downstream.

With the extended drawdown, the muck will compact, giving greater depth to the millpond and preventing suspended nutrients to be sent down the Ahnapee River and, eventually, to Lake Michigan and the Algoma Beach.

After Johnson’s 25-minute presentation, Kitchens opened the meeting to questions but warned that questions had to focus on what Johnson had presented and not on Door County’s decision to proceed with the two-year drawdown.

The first comment came from Village of Forestville President Terry McNulty, who wanted it on record that this is not a permanent fix, and to sell the drawdown, this meeting with a drawdown expert should have been held much earlier, and stakeholders below the dam should have been included from the start. He then started to talk about millpond property owners and how their property would be “in a distressed situation” with the drawdown, to which Kitchens responded that the meeting was not meant to discuss the Door County decision.

Several people asked if pre- and post-drawdown water monitoring would take place. Johnson’s fellow lake biologist Mary Gansberg said the DNR has been involved for the past two years in the northeastern Wisconsin Total Maximum Daily Load (TMDL) study – which Kitchens championed and which ends just before the Forestville Millpond drawdown – but the DNR’s monitoring schedule ends there. She said the county will have to assume monitoring responsibility.

There were also several questions about plans to restock the millpond with fish. DNR area fisheries supervisor Tom Meronek said they can probably restock with panfish, pike, largemouth bass and maybe bluegill.

Millpond resident Robert Sijgers tried several times to ask about the cost of the drawdown to him and his neighbors.

“You’re talking to people who had nothing to do with making the decision,” Kitchens said.

Later Sijgers asked, “How does drawdown take care of the steady source of nutrients?” He was alluding to farm runoff in the millpond watershed.

“You continue to work on the watershed,” Johnson said. “It’s like eating an elephant – one bite at a time,” to which Sijgers responded, “The land of the free or North Korea?”

Kitchens pointed out that Door County’s Soil and Water Conservation Department “is known throughout the state as being aggressive” on nutrient management plans for farmers. “We are working on this,” he said.

“Management is sacrifice,” Johnson said. “It puts everybody out. It’s change. I get it.”

A woman suggested Kitchens introduce legislation that when one county does something that will affect a neighboring county, it has to be conducted as a regional issue, with both counties making decisions.

Kitchens said it was unfortunate that Kewaunee County was left out of the process in making the decision, but ultimately, the water quality of the Ahnapee River should improve after the drawdown and the millpond is refilled in 2021.