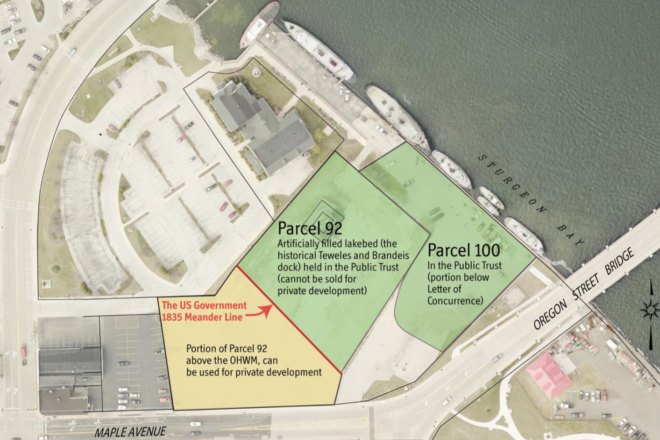 A map of the West Waterfront and the location of the ordinary high water mark. Submitted.

The years-long fight to determine the location of the Ordinary High Water Mark (OHWM) on the Sturgeon Bay west waterfront is over.

The Wisconsin Department of Natural Resources released a final ruling on the line Jan. 3 on parcel 92 near the foot of the Oregon Street Bridge. The ruling places the line in concurrence with the 1835 meander line, landward of the original location of the Teweles and Brandeis granary. The placement was agreed to by the City of Sturgeon Bay and the Friends of Sturgeon Bay Public Waterfront, a group that petitioned the DNR for a ruling on the line after the city had proposed a hotel for the site.

“This is a victory for Sturgeon Bay, for Wisconsin and defenders of the Constitution everywhere,” said Shawn Fairchild of the Friends. “Public rights matter. The Public Trust Doctrine has been championed by the Friends and the current city council for the westside waterfront.”

If it sounds like you’ve heard this before, it’s because you have. The DNR issued what it thought was its final ruling Feb. 5, 2018, placing the line closer to the water. That ruling was appealed by the city and the Friends, the latter arguing that the DNR had improperly overlaid a historical map in making its ruling. The DNR rescinded its ruling in May, and the latest agreement concurs with the Friends’ appeal.

According to state law, the public trust doctrine applies with equal force to filled lakebeds even if the filled-lakebed area can no longer be navigated.

The DNR ruling concluded, “The department recognizes extensive public and private resources were expended to determine the location of the OHWM on Parcel 92 and has strived to make a reasonable decision that protects constitutionally based public interests in the navigable waters of Sturgeon Bay and considers the riparian interests of the City of Sturgeon Bay.”