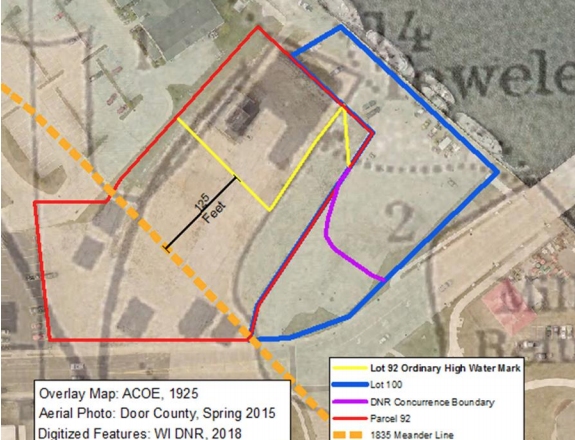 The DNR has determined that the Ordinary High Water Mark on Sturgeon Bay’s West Waterfront follows the yellow line on lot 92 the image above, then continues along the purple line on lot 100.

Sturgeon Bay finally has a ruling on the Ordinary High Water Mark (OHWM) for the west side waterfront. The Wisconsin Department of Natural Resources released its long-awaited ruling Tuesday morning.

City Administrator Josh VanLieshout was still reviewing the document Tuesday morning, but said it appears to be somewhat better for the city than the line proposed in a June settlement between the city and the Friends of Sturgeon Bay Public Waterfront that was rejected by the city’s Waterfront Redevelopment Authority.

“I really have to go through and read the entire document, but it’s probably more favorable than what the city had been faced with previously.”

The ruling does not change the raze order for the Granary, VanLieshout said. Deconstruction of that building is expected to commence in the next 7 – 10 days.

Christie Weber, a leader of the Friends Group which sued the city to stop plans for a 90-unit hotel on parcel 100 based on violation of the public trust doctrine, said the ruling did not appear favorable on first glance but she had yet to review it in detail.

The city has been grappling with questions about the public trust doctrine since at least 2013, when city attorneys and planners were informed by a title company that it could not provide title insurance on the property due to the OHWM question.

The DNR’s official ruling is as follows:

The Department determines the OHWM at Parcel 92 as a line commencing at the Parcel 100 lot line, running north from the west end of the DNR Concurrence OHWM boundary on Parcel 100 to the eastern edge of the former Harris Dock mapped by the 1925 Army Corps of Engineers navigation map, then continuing southwest along the edge of the dock to a point 125 feet waterward of the 1835 meander line identified on the original government survey and then running parallel to the meander line in a northwesterly direction to the Parcel 92 property line.

Bob Papke, the developer who has sued the city to recoup expenses related to the hotel planned for the property, said the decision came as a relief.

“I sincerely hope this can be a positive step for the city to move forward and start to heal,” Papke said.

But that doesn’t mean Papke’s hotel will be resurrected. Papke declared it dead last June, but the DNR’s ruling could allow space for a hotel, further from the waterfront than in the original plan. Papke said his company retains the exclusive rights to develop the property.

“I don’t know where this will go next,” he said. “I await the next decision from the city.”

Alderwoman Laurel Hauser said she was grateful to finally have a determination from the DNR.

“It’s only going to be helpful to know where the line is,” she said. “Now we know legally what we can do. I think that the DNR was in a difficult situation and came up with a compromise. The DNR looked at the science and came up with a defendable line.”