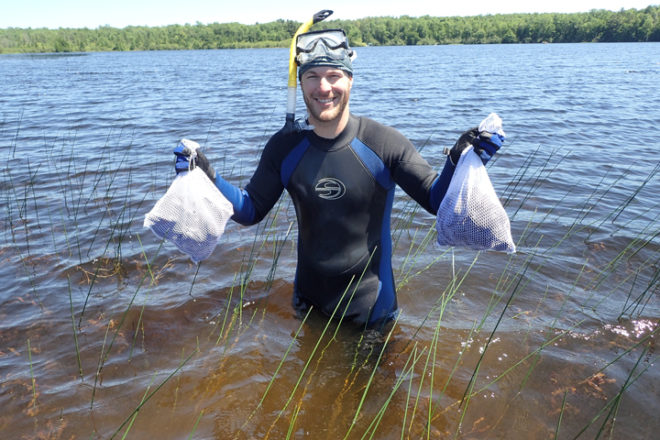 DNR conservation biologist Jesse Weinzinger carries two bags of mussels to identify as part of a statewide survey to better understand the distribution and population of Wisconsin mussel species. Photo by Jason Brabant.

Pity the poor freshwater mussel. Underappreciated, but vital to their ecosystem, mussels have been considered the most imperiled animal group in the world for more than a quarter century.

“There has been a large depletion of the mussel population in the last 100 years,” said Jesse Weinzinger, a Wisconsin Department of Natural Resources conservation biologist who has been documenting extant freshwater mussels in the state.

There are close to 300 freshwater species in North America (or 35 percent of the world’s 800-some species), and 51 of those species live in Wisconsin. However Weinzinger said 24 of the 51 species are either endangered, threatened or of special concern. He mentioned a study in the Fox River in Kaukauna in 2007, where shells of 14 species were found, but only one of those species was found alive.

Weinzinger has spent the past couple years collecting data and numbers of mussels in the state as part of the three-year survey. This summer he plans to turn his focus on the bay of Green Bay and lower Fox River, which he said has never been inventoried for mussels before.

“There is little information known about mussel diversity in the bay,” he said.

The freshwater mussel population does not include the invasive zebra or quagga mussel, both of which originate in eastern Europe. Zebra mussels were first discovered in Lake St. Clair (the connector between lakes Erie and Huron) in 1988. By 1990 it had colonized all five great lakes, and a 2000 study found that zebra mussels made up 98.3 percent of all mussels in Lake Michigan.

The quagga mussel was first found in Lake Erie in 1989, and they are even hardier than zebra mussels. By 2005, quagga mussels represented 97.7 percent of Lake Michigan’s mussel population. Zebra mussels had been found at densities of 899 per square meter, whereas the dominating quaggas have a density of 7,790 mussels per square meter, and have been found covering the bottom at 540 feet deep.

Mussels are considered “ecosystem engineers” for the role they play in making their aquatic habitat better for themselves and other organisms that share the habitat. They feed by siphoning organic matter from the water, extracting what they need for their own growth and excreting nutrients to be used by plant life and other invertebrates and fish. Because they anchor themselves to the bottom, mussels are believed to stabilize lake and stream beds from flooding and wave action. They are also an important food source for a variety of aquatic and terrestrial animals.

We’ll check in with him again later this year to hear results of his Green Bay mussel study.