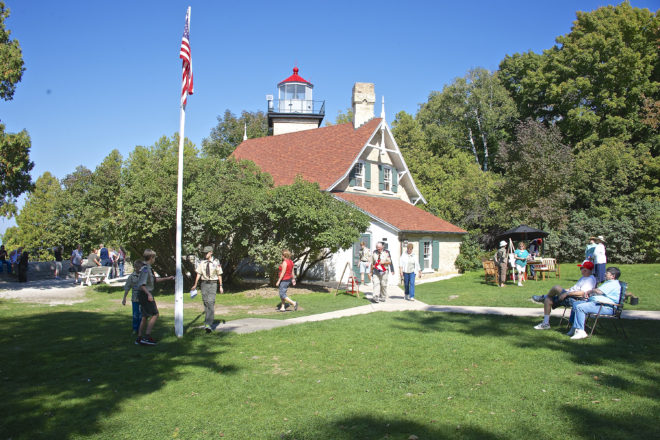 The draft master plan does not include reconstruction of additional historic buildings at the Eagle Bluff Lighthouse in Peninsula State Park, which the Door County Historical Society was hoping to construct using private donations. Photo by Len Villano.

More than 30 people filtered into Stone Harbor Resort as soon as the doors opened on the public comment open house held by the Department of Natural Resources regarding the proposed master plan for northeast Wisconsin properties.

In the three weeks since the release of the draft master plan, which includes Door County’s five state parks, some have raised concerns about what was in the proposed plan and what was left out of it.

Missy VanLanduyt, Recreation Partnerships Section Chief at the DNR, said the master plan serves as a guiding document rather than a definitive list of everything that’s going to happen at the 70,000 acres of public land in the  Northern Lake Michigan Coastal Ecological Landscape.

“This leaves the door open,” VanLanduyt said. “So it gives us the authority to do things whether the department does those things or whether it’s partners.”

The addition of horse trails in Peninsula and Newport State Park have raised the eyebrows of some local residents, including former Peninsula State Park superintendent Tom Blackwood.

“Peninsula is a very intensively developed park with a highly developed trail system,” Blackwood wrote in his comments to the DNR planning team, which he shared with the Pulse. “Adding horse trails would be a huge mistake… Peninsula, as Wisconsin’s second busiest park, seems to be poorly suited to added development. It cannot be all things to all people.”

Blackwood questioned whether there truly was enough interest in horse trails, or whether the equestrian group was simply well organized and participated extensively in public comment during the past few years.

VanLanduyt said the department took public comment into account, but also internally determined that horse trails could be viable at the two parks.

“We looked at everything in the area and said, ‘Where do we think we can accommodate horse trails and what does this do for the economy?’” VanLanduyt said. “Is this sustainable? Do you have the landscape, the topography, the sustainable soils? So we felt that between Newport and Peninsula that those could both support horse trials.”

At both parks, horse trails would likely be a designated system with no other uses. At Newport, the proposed location is north of the visitor center with a separate entrance. At Peninsula, the department is looking at the Highland Road entrance and Lot 5, commonly used by cross country skiers in the winter.

Horse trails at Peninsula would be considered after a review and redevelopment of the entire trail system in the park by an outside consulting firm.

“By doing that 10,000-foot level, which is where we’re at right now, we feel we could realistically add horse trails,” VanLanduyt said. “The next phase is drilling down to the ground level where we’ll do the trail assessment and start to look at the topography, the forest, how do we start to lay out all these different uses.”

Shortly after the department released the draft of the master plan, the Door County Historical Society (DCHS) launched a petition calling for its modification. DCHS had planned to reconstruct a replica barn and stone kitchen at Eagle Bluff Lighthouse in Peninsula State Park, where those buildings once stood. The draft master plan leaves reconstruction of those buildings out.

“The DCHS Board of Directors and Committee were puzzled and stunned by the DNR decision in spite of submitting a three-phase, 22 bullet-point request for inclusion in the 2018 Master Plan,” the group said in a statement.

While DCHS intended to reconstruct the buildings without use of state funds, VanLanduyt said the omission from the master plan was due to the impact new buildings would have on the site.

“It’s already a pretty congested area when folks visit the lighthouse and this would really add to that area and start to minimize the parking and the site area,” VanLanduyt said, adding that the buildings could obstruct the view both to and from the water.

“Both of these buildings are integral to the history at Eagle Bluff Light Station,” said DCHS Lighthouse Chairperson Ann Sheridan. “We are at a time in history when two or three generations do not know how or why a summer kitchen was used, that indoor plumbing didn’t always exist, and subsistence farming was a necessity that required a barn. One third of our visitors are from group tours. During the group visit, public tours are declined because only a limited number may occupy the house at any one time. Reconstruction of the barn will not only provide an opportunity to share the story of farming by lighthouse families, but provide additional space to facilitate more visitors during congested time slots.”

VanLanduyt said the department has supported the group’s maintenance and improvements to existing buildings and is supportive of methods other than construction of new buildings to interpret those historic structures.

The public comment period is open until June 12. VanLanduyt expects the final plan to go to the Natural Resources Board by September for approval.