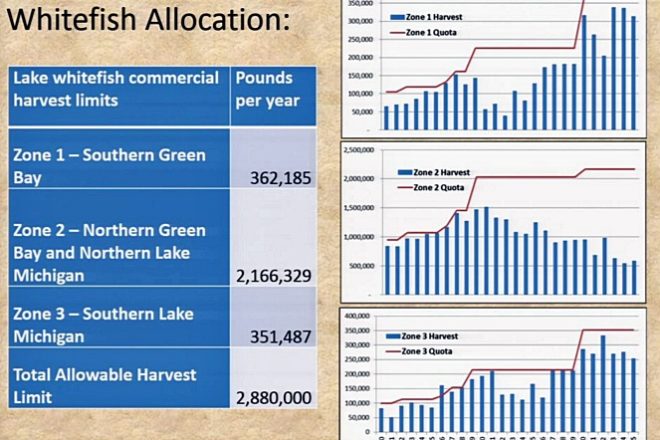 Who makes best use of a public resource such as Lake Michigan? Is one group’s use of the resource better than another’s?

If you are a commercial fisherman, you believe you are making the best use of the resource because your catch is going to people who otherwise would have no other access to fresh fish – those who buy their fish in restaurants and supermarkets. 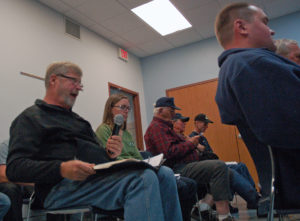 And if you are a sport fisherman, you believe you are making the best use of the resource because you are legion, so all the licensing you pay for individually is what provides money for the fish science that needs to be done to maintain a sustainable fishery.

Fish stocking in Lake Michigan is ruled by the sport fishing industry, thus the imbalance between the predator-prey relationships in the lake, say the commercial fishermen.

Years of fishing with pound nets and gill nets and trap nets and now possibly trawl nets, commercial fishermen are taking our fish – the sport fish – as by-catch as they deplete the stocks of smelt, yellow perch and whitefish, say the sport fishermen.

This is what happens with a mixed-use public resource. Separate passions for the same resource get in each other’s way. 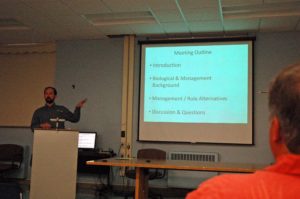 This division was on display, but in a most civil way, on May 12 when fishery specialists with the Wisconsin Department of Natural Resources held a forum on management of Lake Michigan whitefish.

The whole thing began oddly enough with Todd Kalish, deputy bureau director for fisheries, explaining that, unlike most DNR meetings, this one was not called to tell the resource users of the new policies, but, instead, to seek their thoughts before a new management policy is determined.

“Fishery populations change over time so it’s prudent of us to look at our management of the commercial fishery of whitefish,” he said.

Kalish was also the first to mention the predator-prey relationship in the lake.

“The prey base is changing significantly, it’s changing rapidly,” Kalish said, adding that a diverse and sustainable fishery is dependent on keeping a balance in the predator-prey relationship.

While Kalish said the DNR wanted to hold several meetings to get input from the resource users, there is a timeline. They want to have a whitefish management plan to present to the Natural Resources Board by early fall. August would be even better, he said.

DNR fisheries biologist Scott Hansen explained how the commercial whitefish fishery works. It’s split into three harvest zones, each with its own quota that add up to the total annual harvest allocation of 2.88 million pounds. Zone 1 is Southern Green Bay with an annual quota of 362,185 pounds; Zone 2 is Northern Green Bay and Northern Lake Michigan with a quote of 2,166,329 pounds; and Zone 3 is southern Lake Michigan, covering the Manitowoc/Two Rivers/Sheboygan area with a quota of 351,487 pounds. 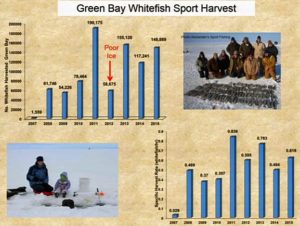 “The spawning stock has evolved and changed over time,” Hansen said. “There’s always been a whitefish fishery in Green Bay, it just has changed a lot.”

The biggest change, he said, is the apparent re-colonization of the west shore tributaries of Green Bay – the Menominee, Peshtigo, Oconto and Fox Rivers – by spawning whitefish.

“There’s a lot of really interesting stuff going on that we’re trying to figure out,” Hansen said. “Now we’ve got this big recreational fishery that is unprecedented and unmatched anywhere else on Lake Michigan. We’re talking about the whitefish ice fishing.”

Hansen explained that the Wisconsin DNR is one of the few remaining states to do winter creel counts.

“It’s not perfect, but it’s probably fairly good. It’s the guiding component that troubles me,” Hansen said. “The guided trip fishery has become a major entity. That does get included here. We do interview guided trips. We suspect we haven’t been doing it as comprehensively as we’d like to.”

“They are very concerned that what they are catching is being included in the model,” he said. “Hopefully this winter we will be able to roll out an official whitefish harvesting reporting system for guides, just like we do for the charter fishermen.”

Hansen also pointed out that whitefish are growing slower than they used to. “Now it takes them seven years to get to commercial size (17 inches),” he said.

When the forum was opened up for questions, there were some very specific questions about whitefish genetics and where the whitefish being caught are from. One questioner wondered why sport fishermen don’t have to abide by size limits as commercial fishermen do. 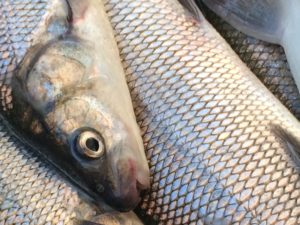 Henriksen responded by saying that has been discussed for years and disagreement remains, however the main argument against it is the fear that many fish will die accidentally as the sport angler tries to get five or 10 17-inch fish.

A sport angler asked if the rumor is true that commercial fishermen may be allowed to use trawl nets in the future.

Fishery biologist David Boyarski said a trawl study is being conducted in Zone 3 that includes monitoring the by-catch. A sport fisherman added that he has heard from several legislators who say trawling is coming and the by-catch is what concerns them.

Dennis Hickey of Hickey Brothers in Baileys Harbor said the biggest concern of commercial fishermen is the predator-to-prey ratio. He said northern pike, spotted musky and especially walleye are preying on young whitefish.

“Nobody’s brought up how much the predator fish are eating the whitefish,” he said. “We bring up nets with walleye burping up whitefish. They’re the age one, two and three. I don’t know how long the whitefish stocks can take that. If all the walleye in there are spawning, we’re in a big, deep hurt because those predator fish have to eat and the alewife stocks haven’t crashed but they’re mighty close, and so are the smelt. So those predator fish are going to have to eat something. I’m really afraid they’re going to do in all of our whitefish and all of us will be hurting.”

Hickey suggested an in-depth assessment of all the fish in Green Bay is needed. “Until we get that, we shouldn’t even be talking about increasing anything.”

The DNR said it will hold another meeting in a few weeks to further discuss whitefish management.