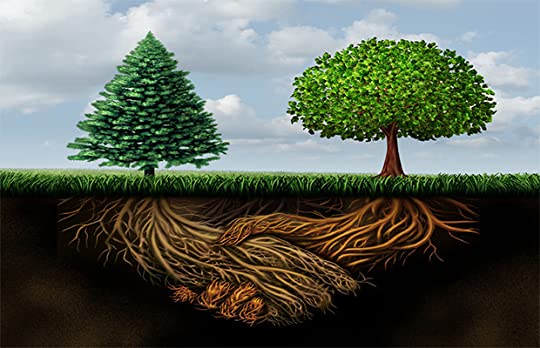 Much of the action appears to be taking place not where our gaze travels up, but below our feet

A March 2018 story in Smithsonian Magazine titled “Do Trees Talk to Each Other?” states that trees, to reach enormousness, “depend on a complicated web of relationships, alliances and kinship networks.”

The story featured Peter Wohlleben of Germany, who might have remained working in obscurity as a forester had his wife, Miriam, not insisted he write a book about his work. That book – The Hidden Life of Trees: What They Feel, How They Communicate – became an unlikely worldwide bestseller, including within the United States.

During the past year, I read that book, as well as Richard Powers’ novel The Overstory. The novel is also about the hidden lives of trees, dramatized through the lives of humans who sometimes courageously, and always passionately, spend their lives understanding, studying and protecting them.

I’ve always been drawn to forested lands. After reading these books, I will never walk in the woods, beneath the still majesty of trees, in the same way again. They are not merely there to shade, soothe or excite wonder and calm. They have grown mysterious and magical. And they are, according to these books, alert, social, sophisticated, communal, cooperative and even intelligent.

Trees are also many of these things to Eric Kruger, a professor and chair of the Department of Forest and Wildlife Ecology at the University of Wisconsin-Madison. Kruger is a forest eco-physiologist. This means, he said, that he’s interested in “how trees make a living.”

We’re all familiar with photosynthesis, the process that allows plants such as trees to convert energy from sunlight, and chemical energy created from water and carbon dioxide, into a solid form of sugar. The tree then banks this in its leaves, stems, trunks, branches and roots to contribute to its growth. The oxygen we breathe is released into the atmosphere as a by-product of photosynthesis.

If trees are “paid” through this photosynthetic process in the form of sugar, then how does a tree spend that sugar? There are a variety of ways, but communication is among those, Kruger said.

First, there are the fungi. Microns in diameter, these soil-dwelling organisms attach to tree roots and form mycorrhizas – literally, “fungus-roots.” These mycorrhizal fungi form networks that spread, map-like, for acres underground, connecting trees to each other. And “once you start linking organisms together, then the magic does begin,” Kruger said.

It’s been called a “wood-wide web,” this mycorrhizal connection – one that enables trees to communicate sugar, nutrients and water to each other as needed. These fungal networks form a “giant web of complexity,” Kruger said, enabling transmission through biochemical messages and electrical impulses.

Mycorrhizal fungi are essentially farming the trees. As the network shuttles materials from one plant to the next, it’s trying to make sure everyone is happy so the fungi get what they want: sugar. The symbiotic relationship allows fungi to consume at least 10% of a tree’s sugar, and likely far more, Kruger said – all in exchange for carrying messages among trees.

Another sugar expense comes when a tree communicates distress signals about drought, disease, insects or herbivores. This is the form of communication that Kruger said he finds most interesting. Trees emit volatile chemicals that then travel the air currents to other trees, alerting them to whatever danger is at hand, be it an insect attack or a deer eating leaves. The membranes of the leaf cells in the other trees have the ability to perceive these chemical emissions and then emit their own “cascade of biochemical reactions,” Kruger said. In the case of leaves being attacked by herbivores, the other trees – and even other leaves on the same tree – produce a chemical defense that makes the leaf less palatable to an herbivore.

“That’s truly the trees,” Kruger said. “Nothing else is involved.”

These are only two of the ways trees in which talk to each other. There are also Mother trees, the largest in the forest, that act as hubs for mycorrhizal networks and pump sugar into the roots of young saplings living in deeply shaded areas of a forest so the saplings can live. Some Mother trees rain nuts down upon saplings competing with their own offspring.

Kruger said he has not personally witnessed the substantive communication that some scientists have documented about Mother trees, but neither is he going to quibble with it, he said.

“Certainly hormonal or biochemical signals can be transported from the fine root of one tree to the next,” he said.

Tree roots can also graft together beneath the ground, forming a physical joint that connects them in a vascular system that exchanges signals, Kruger said. They perceive one another as well. Trees absorb sunlight based on their location within the forest. A tree with a crown that’s exposed to the sky absorbs wavelengths on the electromagnetic spectrum that’s different from what the trees below, living in shade or partial shade, can absorb. The type of wavelength that tree leaves absorb tells the tree where it is in relation to its neighbors.

“So they’re perceiving lots of stuff and acting accordingly, and I kind of include that in communication,” Kruger said.

I had many more questions for Kruger than time or print would allow, but a final one was whether the enormousness of a tree depends on its interconnection with other trees.

Kruger was open to all possibilities.

“There’s a bit of the whimsical, a stretching of the imagination” about trees, he said, “which I love because that makes it enticing. I wouldn’t say no. I just don’t have my own firsthand evidence in my career to back that up.”

The Hidden Life of Trees: What They Feel, How They Communicate by Peter Wohlleben

The Overstory by Richard PowersEntangled Life by Merlin Sheldrake