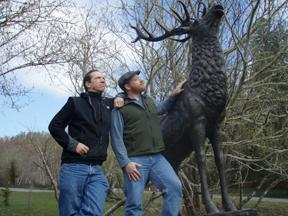 Doc Heide and Lee Becker pose with a statue of an elk, spotted from the road on the way up to the Redwoods.

Although Lee Becker and Doc Heide admit they are a generation apart, you’d never know it by talking with them. The two American Folklore Theatre (AFT) actors and writers are such good friends that one would have to wonder how they are able to work so well together – but their friendship is actually one of the strongest facets of their work, along with a shared love for the Green Bay Packers, sci-fi movies, and Thai food. They enjoy writing outdoors together, and have crafted scenes almost everywhere, from the mountains of California to the trails of Peninsula State Park.

“I’d love to know the number of miles we’ve covered hashing out a show,” Becker says. 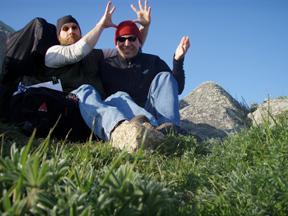 Doc and Lee clown for the camera at Pt. Reyes on the Tomales Point Trail, one of their favorite work spots.

The number has to be quite a bit:  from the sci-fi football musical Packer Fans from Outer Space to their new AFT fall show Guys & Does, which will premier at the Ephraim Village Hall on Friday, September 4, Heide and Becker have paved their own way through their own “crash course” of musical writing.

Packer Fans was the first musical the two worked on together, and the planning for the show began in the fall of 1996. “I took Lee aside and said, ‘I’m thinking of writing a show, and I’d like you to be a part of it,’” Heide said. Becker quickly agreed, even though the off-season took them to opposite sides of the states – Heide resided in the San Francisco Bay Area, while Becker was living in New York City at the time. The duo made it work, travelling to either coast to write together and brainstorm ideas.

Packer Fans turned out to be a huge hit for AFT (the show follows the exploits of Juddville fruit farmer Harvey Kiester, a big Packer fan who is called upon by a group of Packer aliens to save their planet from the evil Space Bears), but both Heide and Becker recognize that the show “took forever” to write. 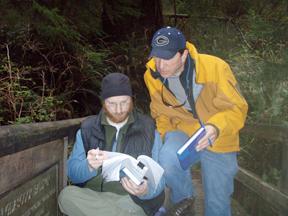 “We had a great title, a great opening song, and the setting of greater metropolitan Juddville,” laughs Heide. “What we didn’t have was an outline. We just kept writing, figuring that eventually, the show would end.”

Becker agrees, saying, “We literally produced reams of scripts for the show.” After many workshops and much rewriting, Packer Fans was able to make its debut on the AFT stage in Summer 2002 – nearly six years after Heide and Becker began work on it.

The background of Becker and Heide’s first show is necessary to tell, because Guys & Does followed a very different trajectory. “We began working on another show after Packer Fans – an incomprehensible show about human rationality and the complete history of science,” Becker recalls. “I was flying out to California to visit Doc and continue work on the show, but when I got there, Doc said, ‘I’ve been thinking about this deer hunting show…’”

This concept was not foreign – in fact, one of AFT’s biggest hits, Guys on Ice, was supposed to be a deer hunting show. Writer Fred Alley was working on the show around the same time that actor/writer Jeff Daniels staged Escanaba In Da Moonlight, a show about an Upper Michigan deer camp. Marvin and Lloyd, the two main characters in Guys, were changed from deer hunters to ice fishermen to avoid any similarity to Daniels’ show.

Becker was all for the idea, and by the end of the week, he and Heide had an outline for the show that would become Guys & Does (which is the title Fred Alley would have given to a deer hunting show had he written one). The show is explained as a “wacky and wonderful excursion into the world of Wisconsin deer hunting,” and focuses on mill worker Fritz Dingleheimer as he once again heads “up North” for his annual deer hunting trip. On this trip, however, Fritz is accompanied by Duane Puddles, a non-hunter whose primary skills are talking and knitting. Duane is dating Fritz’s daughter, Susie, who’s arranged for him to go with her father so the two men can bond. Duane plans to marry Susie, and hopes to impress Fritz and gain his blessing on this trip. Oh, and the two men meet a talking white deer that sounds like Alec Guinness with a Northern Wisconsin dialect.

At first glance, Guys & Does contains all the necessary elements of a trademark AFT comedy – hilarity as well as healthy dose of heart – but Becker and Heide are quick to say there is a larger universal theme at play.

“It’s about a connection to nature. Non-hunters often seem to stereotype hunters in a negative way, but really, the true hunters are often conservationists,” Heide says.

Becker adds, “Hunting is actually more ecological than most people realize, and part of our research for the show was interviewing serious hunters who respect and study nature.”

Along with the connection to nature, the show also touches on the theme of ethical hunting. “There’s a point in the show in which the deer (named Staghart of the Golden Horns) actually weighs in on the type of hunting he prefers,” Becker says. This part of the show traces back to a story in Navajo culture, in which the animals agreed to give themselves up if hunters remained ethical.

While the show already appears to fit into the long list of AFT show favorites, the format of the show is a bit different. The cast of Guys & Does showcases four characters – played by only three actors:  Becker, Heide, and AFT favorite Doug Mancheski. “Theatres are looking for small casts these days,” Heide says, noting that he and Becker would love to see the show play on other stages. The show was also commissioned through AFT’s Fred Alley New Works Fund, which is the first commission Becker and Lee have received for writing an AFT show.

When asked about the secret of their successful writing partnership, both Becker and Lee can sum it up in one word:  respect.

“We both have such enormous respect for one another, and we have such similar interests,” says Heide. “Working with Lee is so joyous. There’s no trepidation in volunteering an idea; there’s no ego. We never get stuck for long, and if we do, it’s good to be stuck with someone else.”

Guys & Does runs from September 4 through October 24 at the Ephraim Village Hall, located in the heart of Ephraim. The show plays Monday through Saturday at 7:30 pm, with an additional Saturday matinee at 4:30 pm. Tickets are $21 for adults ($18 for matinee performances), and $11 for children twelve and under. For tickets or more information call 920.854.6117 or visit http://www.folkloretheatre.com.