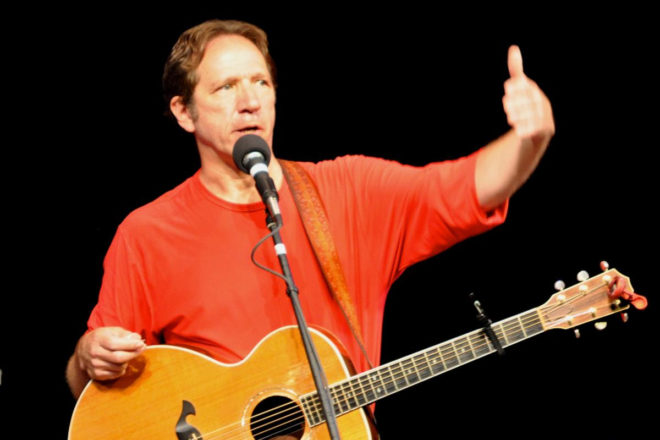 As the final installment in its virtual winter season, Northern Sky Theater will present a virtual concert by songwriter and singer Doc Heide on April 17, 7 pm. The show will premiere live and then be available on demand through May 31.

Frederick “Doc” Heide is well known as a Northern Sky Theater co-founder, performer, artistic adviser, board member and writer, but he’s also an acclaimed singer-songwriter with three studio albums to his credit, as well as the many songs he’s written and co-written for musicals. A finalist in the Kerrville Folk Festival’s prestigious New Folk Competition, Heide is known for his lyrical elegance, prowess as a guitarist, and sweet, mellow vocal style.

He’s performed with Fred Alley, Eric Lewis and folk legend Tom Paxton, but this will be Heide’s first full concert as a solo singer ever – although his wife, Jody Jessup, will join him on cajón and other percussion.

“Doc Heide’s songwriting is consistently smart and thought provoking and beautiful, but it’s also so eclectic that you never know what you’re going to hear next,” said fellow singer and songwriter Katie Dahl. “Hard to believe he’s never performed a show where he’s the only singer. I can’t wait for the full Doc Heide concert experience.”

During the show, Heide will offer a chronological presentation of some of his favorite original songs not written for the stage, including two that have never been heard before in concert.

Tickets for Doc Heide’s concert are available through a pay-what-you-choose pricing system. Purchase them online at northernskytheater.com or by calling 920.854.6117.