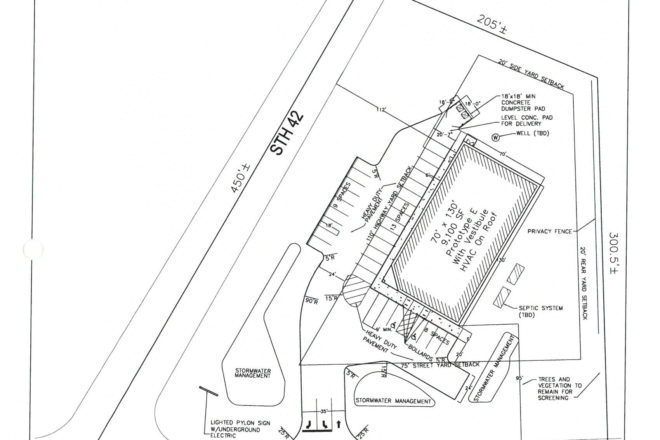 The developer who had sought approval late last year from the Sister Bay Plan Commission to build a Dollar General store has selected a new site for the bargain chain store – this one within the Town of Egg Harbor.

Developer Peter Oleszczuk of Midwest Property Development is proposing a 9,100-square-foot store on a 2.5-acre parcel of vacant land where Highway 42 meets Hillside Road just south of the Egg Harbor Fun Park. The preliminary site plan submitted to the Egg Harbor Town Board shows 30 parking spaces for the store, which is set back about 112 feet from the highway. Its main entrance is off Hillside Road.

The Town of Egg Harbor is not subject to Door County zoning – it’s one of five Door County towns that did not voluntarily enroll – but it has, instead, its own ordinance governing building permits and architectural controls that addresses items such as minimum lot sizes, height, setbacks and impervious surface ratios.

As part of the town’s ordinance, there is an Architectural Control Commission, made up of the town’s Plan Commission members, that examines all applications for commercial development to ensure compliance with standards of the town and state. These standards pertain to the control of the area’s general character, landscape design, screening, exterior lighting, building design and architectural appeal, for example.

Building permits for new construction are then issued by the town’s contracted municipal building inspector, Brett Temme, who performs the state-required inspections at various stages of construction. Wisconsin statutes say that municipalities may not be less or more restrictive than state codes, Temme said.

“We’re [building inspectors] involved after all the state and town approvals and when construction is about to begin,” Temme said.

No building permits can be issued under the town’s ordinance until the town board holds a public hearing on the application. The town board set that date last week for Nov. 5, 6 pm, at the Egg Harbor Town Hall. Notice of the application must also be sent to all property owners located within 300 feet of the proposed development.

After the public hearing, the next step is an Architectural Control Commission review, according to Paul Peterson, town board chair.