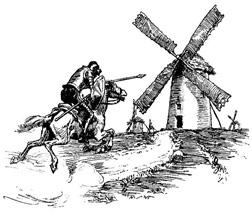 Woodwalk Gallery Theater’s third annual Fractured Classics production is Sing-Along Don Quixote OR “I Got Plenty o’ Nuttin’” scheduled for Friday, June 3 through Sunday, June 5 with all performances at 7 pm.

This year’s classic is Cervantes’ Don Quixote recast on Broadway by Dale Wasserman in Man of LaMancha – although neither artist would recognize their work, as this is the story told from Don Quixote’s horse’s point-of-view. The ever-faithful steed, Rocinante, is eyewitness to Quixote’s follies and eventual death, but that’s only the beginning of the story as he has fallen in love with a mare, Maria.

In Sing-Along Don Quixote the audience will sing, with all the lyrics and direction provided by Pamela Parks of Parks, Phillips & Co. Songs will include highlights from Porgy and Bess, West Side Story, Carousel, and Man of LaMancha.

Starring are Leif Erickson as Rocinante, Jennifer Erickson as Maria, and David Clowers as the Inn Keeper. The troupe will be joined by Lockwood Family Players: David Morgan as Don Quixote, Susan Moran as Dulcinea, Margaret Lockwood as Belerma, and Allin Walker as Cide Hamete Bennengeli, the narrator. Janet Anderson is the production’s accompanist.

Attendees are encouraged to dress for the weather. Woodwalk Gallery is located at 6746 County Road G, just off of Highway 42.

For more information or to make reservations call the Woodwalk Gallery at 920.868.2912.