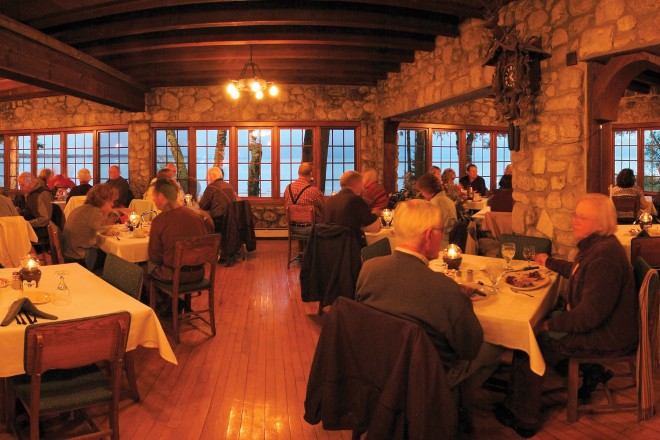 The highest praise you can give a restaurant in the county is to say that locals frequent it. That is definitely the case at Donny’s Glidden Lodge Restaurant. You aren’t just going to find locals, though; visitors and summer residents are also very much in the know when it comes to where to find a fantastic meal at a reasonable price.

To fully appreciate this tradition, you must go back to the ‘80s when Donny and Rita Zellner owned the Alaskan Supper Club (in Alaska, Wisconsin). At the Alaskan, portions were generous, no detail was ever overlooked, and the prices were below what people expected to pay for the quality of food that was on the menu. When Donny and Rita bought the Glidden Lodge Restaurant in 1998, their large fan club followed them 36 miles north.

Donny and Rita are partially retired now. In May of 2005, they handed over the reins to their son, Tim Zellner, and his business partner, Andy Mueller. Early on, while Tim was learning the family business from his parents, Andy was honing his culinary skills in Green Bay and De Pere. Andy’s previous professional experience included a sports cooking show on UPN and a stint as Reggie White’s personal chef in 1996. (As a side note, Andy feels that he played a major part in the Packers’ Super Bowl win that season, but figures the ring he was expecting must have gotten lost in the mail.) The experienced chef also writes a column in The Advocate aptly named “In Good Taste.”

“I’m humbled by the opportunity [to take over the restaurant] and, as a chef, the ultimate praise lies in the fact that Donny entrusted me and my skills to?continue what he worked so hard to create. I’ve been in the business over twenty years and every time I spend even a few moments with Donny, I learn something valuable. It’s better than culinary school,” Andy reflects. “The things he teaches me are things no culinary school offers classes on. Maybe they should; there would be more successful restaurants in the world.”

Tim and Andy do not appear to be intimidated by the challenge of being Donny and Rita’s successors. Perhaps that is because they understand the straightforward formula for success and don’t try to change anything. As executive chef, Andy oversees all the responsibilities in the kitchen. The steaks are hand cut and aged on the premises, all the bread is home baked, and the various offerings from the salad bar and the soups are made from scratch daily, just as before. The nightly specials are popular fare, especially Monday night’s 8 to 10-ounce cold water Australian lobster tail for $25.95, which is about half what more metropolitan-area restaurants charge. Along with their nightly specials, they also offer an early bird special from 4:00 to 5:30 pm, which still includes the requisite trip to the soup and salad bar along with a smaller portion of their nightly feature. For $10.95, it definitely gets people’s attention.

The front of the house is Tim’s domain. He handles the drinks for the lounge and the restaurant by himself, which can mean in excess of 300 people on any given night. If you’ve been to the restaurant a couple of times, chances are good that he will have your drink order down. Regulars like Lee and Peggy Howard, who have a second home a mere three doors north of the lodge, have been dining at Glidden for 60 years and 30 years respectively. “Tim always has my Tanqueray ready when I come through the door,” says Lee. “He’d have Peggy’s drink ready too, except that she is usually deciding between wine or a Bloody Mary.”

Over the years, the place has had different owners and styles. Lee, in fact, recalls eating family-style meals as a youngster in the much-unchanged dining room. “Back then, you ate whatever was served to you,” says Lee, who has many fond memories of the times he had there with his family. “When the Zellners took over, it was such a major improvement. They were always so gracious and welcoming,” he praises. He has given his stamp of approval to Tim and Andy as well. “It is still one of our favorite places,” he says. For the record, the Howards are likely to order the walleye or the Glidden signature dinner, a 10-ounce tenderloin with a Merlot sauce, carmelized onions and Gorgonzola toast points.

The genial hosts and wonderful food are certainly large factors in what brings people back over and over again; however, the scenery is something special in its own right. Set on the Lake Michigan shore, the Glidden is considered to have one of the best views anywhere. Even in the off-season, diners can admire the winterscape outside while cozying up to bar’s stone fireplace.

Customers like the tranquil setting and frequently choose to celebrate their special occasions at the restaurant. “Our customers are really comforted by what we have here,” Andy explains. “They see a lot of the same faces again and again, whether they are staff or other diners. I think that says a lot about what it’s like to work here and what it’s like to dine here.”

Although the Glidden possesses many elements of “fine dining,” Tim and Andy prefer not to be placed in that category. They are more comfortable with the description of upscale casual dining. Their restaurant is easy going, without pretension – the focus is on the food and the service. “This is why we are in this business,” Andy says as Tim nods in agreement. “We want our customers to get a great meal with great service.” The number of repeat customers, it’s plain to see, proves they consistently hit the mark.