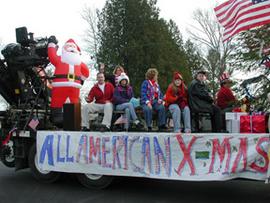 Before the turkey is carved and the pumpkin pie sliced, everyone is invited to the only Thanksgiving Day parade in Wisconsin – right here in Door County. This year the annual Jacksonport Thanksgiving Day Parade will begin at noon on Thursday, November 27 with Wisconsin Lt. Governor Barbara Lawton serving as Grand Marshall.

The parade, which began as a simple community activity, has since become a major fundraising event.

“The parade actually started when I suggested the idea to my neighbor, Verlin Kiehnau,” recalled parade organizer, Jeri Taylor. “He thought it sounded like fun and agreed to ask some horseback riders to ride in the parade. The first year we didn’t think anyone would come out and watch so we threw birdseed instead of candy. But much to our surprise several people did show up, and we decided to make it a fundraiser.”

Each year since the inaugural parade in 1997, participants have collected contributions along the route to benefit an organization and/or Christmas family. “Some of the charities have been a local person or family that is going through hard times or medical problems,” explained Taylor. Past recipients have included the Jacksonport First Responders, Sunshine House, and Breast Cancer Awareness.

“This year as we have done every year, we are adopting a family in need of Christmas through Feed My People,” said Taylor. “This event is about neighbor helping neighbor on Thanksgiving Day. We will be accepting donations during the parade, but contributions can be made any time.”

Stepping off from the Jacksonport Fire Station at the intersection of Highway 57 and County V, the parade proceeds south, turns at Mike’s Port Pub, and heads north to the Square Rigger Lodge & Restaurant, where participants return to the parade “head.”

“It starts and ends in the same place. Spectators can actually watch the parade go by three times if they’re standing in the right place,” Taylor noted, adding, “We have well-mannered pets and some exotics, horses, kazoo bands, cars and trucks and a baton twirler – me! We’ve had Santa, Irv Johnson, arrive in my little black Jeep, an easy chair on a flat bed trailer, and finally in John Mayberry’s horse drawn carriage.”

Everyone is invited to the pre-parade banner party at Pen Pub on Sunday, November 23 at 5 pm. Parade participants are asked to begin lining up at 11:30 am on Thanksgiving Day. Mike’s Port Pub will be open from 11 am – 2 pm on Thanksgiving Day in honor of the parade.