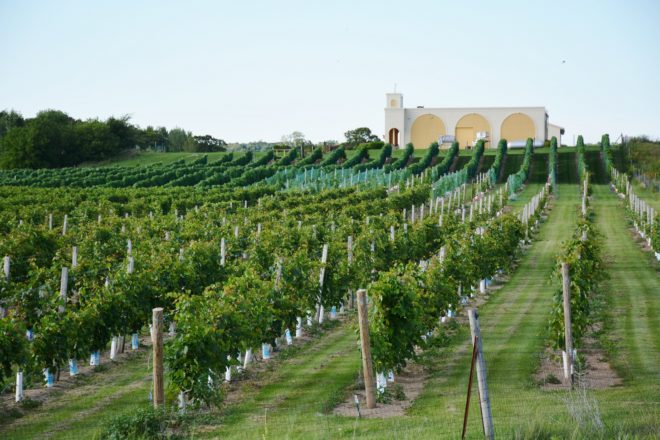 Parallel 44 Winery in the Town of Carlton in Kewaunee County rises out of the surrounding agricultural landscape like an Italian villa surrounded by vineyards. Submitted photo.

Things have changed since the late July meeting where Andy and Karen Gundrum went to the Sevastopol Town Board seeking a conditional use permit to build a winery to go with the six-acre vineyard on the property they own at the corner of Hwy 42 and County PP. The town board rejected the conditional use permit.

At the Sept. 18 meeting of the board, Karen Gundrum explained that health issues in their family has forced them to change their plans. Now, Steve Johnson and his wife Maria Milano, owners of Parallel 44 Winery in Kewaunee County and Door 44 in Sturgeon Bay, want to build the winery as their new Door 44.

Steve Johnson brought with him letters of support from the Town of Carlton, where his Kewaunee County winery has operated for the past 12 years without a complaint, and other supporters, including researchers at the Peninsular Agricultural Research Station.

As had been previously explained by the Gundrums, they have been growing grapes on their property, and Johnson has been using those grapes in his wines. Johnson said the couple has a real passion for working in the vineyard, and they want to continue doing that, even though they no longer care to operate a winery.

Johnson addressed some of the complaints that have been leveled against the plan, including that some people believe there is enough alcohol already being produced in Door County, or, the vineyards are fine but we don’t want a winery here.

Johnson pointed out that in 2012, the Wisconsin Ledge was recognized as an American Viticultural Area, meaning it is a recognized grape-growing area.

“If you want to make grape growing a sustainable industry you need to have people taste the product where the grapes are grown,” he said.

People want the experience of seeing where the grapes are grown and where the wine is made. “We’re here to give experiences to people,” Johnson said.

He also mentioned that his Parallel 44 wines have won a number of international awards.

“There’s something about this climate that makes great wines,” he said. His vision is that someday, the cold hardy grapes that thrive in this climate and the wine made from them will be as recognized and sought after as much as the wines from better known viticultural areas such as the Finger Lakes area in New York or Napa Valley on the other side of the country.

Sevastopol Supervisor John Staveness asked Johnson if the building has to be so big. The original concept calls for an 11,000-square-foot winery and tasting room. Johnson answered that the facility is designed to produce 5,000 cases of wine annually, which is about 1,000 cases more than he produces now, but he would like to build for the future of viticulture in Door County.

“I do believe there will be other people growing grapes here,” he said. “This is a viticulture area and growers want to be there because they can charge more for their grapes.”

But, Johnson said, he would be willing to find a way to make it work.

Supervisor Chuck Tice asked Johnson if they would be willing to change the design of the building, which he said currently looks like a city post office.

“We would like to keep the rural character,” Tice said, adding, “make it look like a barn, if you could.”

Town Chair Dan Woelfel said he was “overwhelmed” by the scale of the winery.

“I don’t think it brings any charm to our community,” he said.

“In terms of aesthetics, we want to fit in,” Johnson told the board.

Mark Nysted of the Green Bay-based KELLER, Planners, Architects, Builders, pointed out to the board that 95 percent of the property where the winery is located will remain green space, a feat most businesses cannot claim.

Asked if they could scale the project back, Johnson said you start doing that and it diminishes the experience they want to provide to customers.

“If it’s not big enough for people to enjoy themselves comfortably, there’s no point in doing a winery,” Johnson said.

Nysted offered to bring an architect to a meeting to hear design thoughts from the board and neighbors. A meeting to do just that was set for 5 pm on Oct. 2, at which time the town board could issue a decision.

The board also heard from Bryan Troutman, who was looking for monetary support from the town to pay for signs for the first of 13 bicycle loops that are being created under the Door County Bicycle Plan. He said the first 30-mile loop includes Sturgeon Bay and Sevastopol.

He mentioned that $10,000 is being sought for signage for the first loop. He said pledges have already been made from a number of homeowners associations.

The idea with these 13 bicycle loops – three in Southern Door, two on Washington Island and the rest throughout what’s left in between – “is to make Door County the premier biking destination in the state,” Troutman said. “The economic value in this is tremendous.”

The board said they would include discussion of money for bicycle loop signs when they begin budget talks next month.