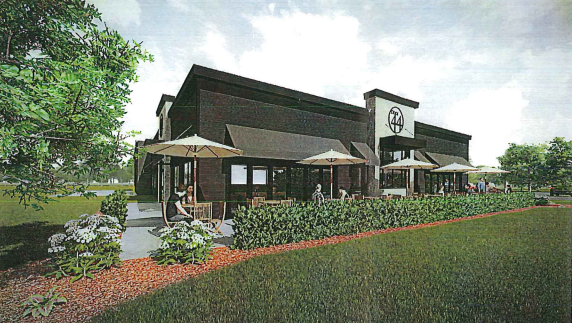 An artist’s rendering of the Door 44 Winery in Sevastopol. There is a more recent rendition of the building, but was not available at press time. Keller Builds of Kaukauna will construct the building.

After a four hour meeting that included testimony for and against, the Door County Zoning Board of Adjustment (ZBA) gave approval on Jan. 9 for the owners of Parallel 44/Door 44 Winery to build an 11,000-square-foot winery with a 118-seat tasting room and farm market on a 23-acre parcel at the corner of Highway 42 and County P in the town of Sevastopol.

“I wish I could take everyone who was here out to Napa Valley right now and ask, is there anything you really don’t like about this?” said Parallel 44/Door 44 owner Steve Johnson after the meeting. “I really feel in my heart of hearts this could be the cornerstone of more places like this in Door County.”

Both Johnson and his wife, Maria Milano-Johnson, testified at what was believed to be the 13th meeting held on the subject of the winery with various town and county boards, each of which has taken different stances on approval of the winery.

The objections by those residents included traffic safety on County P, where the winery entrance will be; that the winery would change the rural nature of their neighborhood; aesthetic objections to the size and “modernistic” style of the winery itself; and concerns about noise and drunken behavior from winery visitors.

“I’m glad there was a public airing of all the issues so people understand what we’re trying to do,” Johnson said. “It’s a huge undertaking. We’re going to make sure we do everything right.”

The couple explained to the Board of Adjustment that they turned a vacant cornfield into a vineyard and winery at their Parallel 44 location in Kewaunee County 12 years ago without a single complaint from neighbors or police. Five years ago they bought a portion of the Grandma Tommy’s building to sell their wines as Door 44. That building is also in the Town of Sevastopol.

“We reached a point where the current location is not sustainable or sufficient,” Johnson told the board.

The couple also pointed out they are interested in promoting the Wisconsin Ledge American Viticultural Area that was designated by the federal government in 2012. Last year they handled more than 30,000 tons of Door County grapes for their wines, and almost 33,000 pounds of the hardy Marquette grapes came from the five-acre vineyard that Andy and Karen Gundrum have been tending on the property since 2012. Johnson said the Gundrums are their favorite growers.

The Gundrums testified that their original idea was to build the winery themselves.

“I was 65 when we started this,” Andy Gundrum said. “Things have changed for me quite a bit.”

Health issues forced the Gundrums to reassess their plan, and that’s when the Johnsons got involved. Andy said he and Karen will continue to work the vineyard and will also have financial interest in the winery.

One of those speaking in support of the winery was Richard Weidman, the retired superintendent of the Peninsular Agricultural Research Station and lifelong resident of Sevastopol, who talked about the viticultural research he and others did at the research station and the probable success of a Door County winery that uses local grapes.

“One thing about having a processing winery in our area, it opens opportunities for other growers to put in one- or two-acre vineyards to supply this winery with grapes,” Weidman said. “I support it professionally and also as a resident of the Town of Sevastopol.”

After testimony and rebuttal from both sides, ZBA Chair Lars Johnson closed the hearing so the board could deliberate. The board voted unanimously to approve the winery, with 14 conditions, 12 of which were outlined in an October letter from the Land Use Services Department. The original 12 conditions include that the hours of operation be from 10 am to 6 pm, that the business has to be open by Oct. 23, 2019, and no food can be prepared on site.

The board added two other conditions. The conditional use permit allows a business to be open later hours on 10 days per year. Because of resident concerns that the venue would be rented out for weddings – despite assurances from the Johnsons that they are only interested in winemaking and not becoming a wedding venue – ZBA board member Bob Ryan suggested the winery not be allowed the 10-day option, which the rest of the board agreed with.

The other condition was that the business owners meet with the Wisconsin Department of Transportation (DOT) to ask them about the need for a traffic study for cars turning from Highway 42 onto County P, and to provide documentation of the DOT response to the board.

One of the other letters of support for the winery came from the Door County Economic Development Corp., and was signed by board chair Mike Baudhuin and Executive Director Caleb Frostman. After the board approved the winery, Frostman said, “Between the infrastructure we’ve put in place to support wineries and viticulture and looking at this with an economic development tint in terms of real estate development and job creation, led us to write the letter that we wrote,” he said. “I think there’s an opportunity for it and I think it’s already a fairly strong draw for the county. This fits right into that. I think it might be the start of something good.”