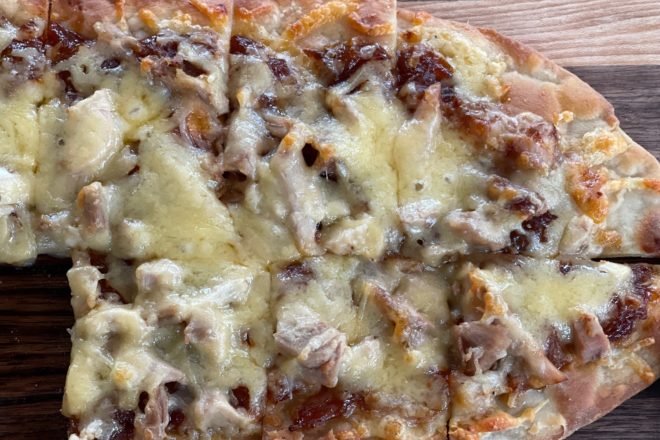 The menu will be different when the Door Artisan Cheese Company restaurant, Glacier Ledge, reopens the first week in June. Among the dishes sampled last week was this flatbread, layered with potato, brussels sprouts, caramelized onions, turkey and barbecue sauce, and topped with the company’s Valmy cheese (beer-washed Gouda) and Top Hat Bandaged Cheddar. Photo by D.A. Fitzgerald.

Second, this year the company received a Wisconsin Department of Agriculture, Trade and Consumer Protection (DATCP) Dairy Processor grant for $25,000. To mark the occasion, DATCP Secretary Randy Romanski stopped by May 20 for a tour of the cheese-making operation and a lunch that included some of the items that may appear on the new menu when the company’s restaurant reopens.

The purchase of Door Artisan Cheese Company took place fewer than three months ago, and its restaurant, Glacier Ledge, closed during the business transition.

Gutierrez had worked for the company already. Stulginskis moved to Door County a couple of years ago, met Gutierrez and discovered a new vocation.

“A long story short, here I am in the cheese business, and I never would have imagined that,” Stulginskis said.

A new head chef has been hired from Denmark, and Glacier Ledge is expected to reopen the first week of June. It will be doing a lot of local sourcing for its menu and offering more casual dishes such as flatbreads and pizza in which the cheeses can shine.

The new DATCP grant will enable the operation to expand production to grow its wholesale side. Currently, the company can make about 1,500 pounds of cheese at the 8103 Hwy 42 address.

“That won’t be quite enough to meet the needs of some of the grocery-store chains, which is why we need to expand the wholesale business,” Stulginskis said.

Romanski doesn’t have any ties to Door County, if memories aren’t included – he and his wife honeymooned on the peninsula 31 years ago – other than a desire to get around the state to see all the varieties of farm and food production that makes Wisconsin the eighth-largest agriculture-producing state in the country.

In milk production, only California outproduces Wisconsin in milk production in the nation, but Wisconsin has more dairy farms (6,500) than any other state. That’s about 10% of the 64,100 farms in Wisconsin, yet dairy accounts for, at $45.6 billion, almost half the $104.8 billion that agriculture contributes to the state’s economy annually.

“We account for about 25% of all the cheese made in the United States,” Romanski said. “It’s not just quantity, but quality. If Wisconsin were a country, we would be the fourth-largest cheese-producing country in the world. The volume’s there, but it’s the quality, too.”

Wisconsin has a Master Cheesemaker Program that offers the equivalent of a Ph.D. in cheese and is the only state in the U.S. with that level of certification. Wisconsin is also the only state that requires a license to make cheese.

Romanski isn’t a fan of designating a Wisconsin state cheese, despite legislative efforts to give Colby that distinction.

“We have hundreds of varieties of cheeses in Wisconsin, and they’re all fantastic,” he said. “I think the Wisconsin state cheese should be cheese.”

As part of the 2021-23 biennial budget, Gov. Tony Evers increased the annual funding for the dairy-processor grants from $200,000 to $400,000 to provide additional support to Wisconsin’s dairy industry. DATCP received 43 grant requests totaling more than $1.7 million for this cycle. Of those, 19 were funded, with Door Artisan Cheese among them. No other Door County company received one of the grants.