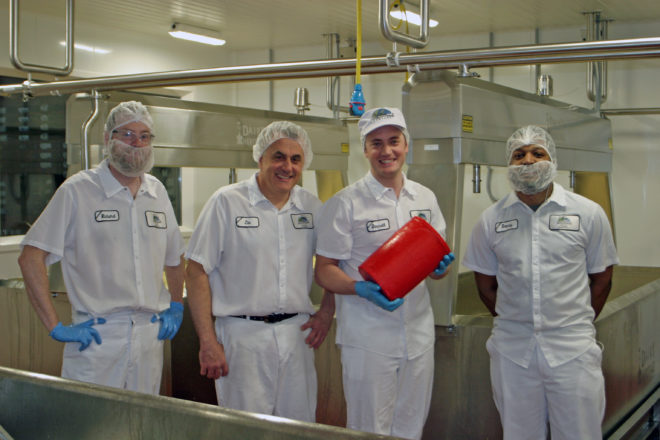 When Door Artisan Cheese Co. owner Mike Brennenstuhl called cheesemaker Darrell Demeter last week to tell him he won a world championship for his Top Hat Cheddar, a cave-aged English-style cheddar in the Natural Rinded Cheddar category, Darrell asked, “What do I do now?”

“It’s a creative effort with our whole team,” he said, five days after his one-year-old startup artisan cheese factory in Egg Harbor won the gold at the World Cheese Championship held in Madison March 6-8. “This isn’t the first world championship I’ve been involved with, so my encouragement to my team is that even though it’s a joint effort, nobody can take away the fact that Darrell Demeter is a world champion in caved-aged cheddar cheese. Embrace the moment. You may never get a world championship again.”

The team Brennenstuhl refers to includes Master Cheesemaker Jim Demeter, Darrell’s father, who took home a very respectable third place in the fresh asiago category with his Crema Pressato. They are fourth and fifth generation cheesemakers who have spent a good deal of their careers working in the same plants.

Brennenstuhl himself is a Master Cheesemaker and a second-generation cheesemaker. Add it all up and the team brings 100 years of cheesemaking experience to the table.

Jim Demeter said all three of them have worked in situations where it’s more about cranking out product than concentrating on quality, but the premise here is in the name – artisan.

“This takes me back to my roots,” he said, “a small plant like this and making all the varieties of cheese we make.”

Winning two major awards in the world’s largest cheese contest –  from among a record-breaking 3,402 entries in 120 categories – in your first year of operation is both the kind of publicity you cannot buy and a harbinger of even better things to come.

“To me it means a lot,” Jim Demeter said about the recognition. “We haven’t been making cheese very long here. To come out like that and do pretty well. Honestly, we didn’t have a whole lot to choose from. We’re just getting rolling. We spent the summer perfecting everything. Fall and winter is when we kind of took off on things. Any time you start up something like this, you have to train the people and get the equipment to cooperate, and a whole new everything. You don’t know how your cultures are going to react, salts intake, you just don’t know. To be less than a year and do something like this is pretty cool. To even get in the top five or six is really an accomplishment. It is such a tight contest.”

Brennenstuhl points out that entering contests is about more than winning awards, although those are very nice, too.

“We always want to be involved in competitions and judgings so that we can develop baselines of the quality of our cheese. A cheesemaker always wants to find out how he stands amongst his peers,” he said. “Whether you win an award or you don’t, you always will get a very good critique from the judges. There’s a regimen of scoring that has to take place on many different things about that cheese. We can take those scores and Jim and I as master cheesemakers, we can look at those things and tweak our recipes to improve the quality even more.”

Beyond that philosophical perspective, Brennenstuhl adds, “Looking at it from a bigger perspective, this opens a lot of marketing doors for us. We had always intended to market our cheese beyond our retail store and creating a name for ourselves as one of the premier, small-batch artisan cheesemakers in the U.S. The facility we have is second to none. If you had to design the perfect small artisan cheese factory, it’s here.”

He said there is no fear that they will run out of the top dog Top Hat Caved-Aged Cheddar, and they will be happy to help you find a wine, beer and food pairing with your cheeses.

What sets this cheese apart?

“Mike said he wanted to do a cave-aged. We have to do something different,” Jim said. “Everybody’s doing cheddar. Mike wanted a truckle mold, cylinder type. It makes you think of the old-fashioned colby longhorn. We wanted a dryer feel to it, and more on the mild side. I haven’t done cheddar forever. My expertise is in the soft cheeses and Swiss cheeses. We’ve got some basic recipes. It took us quite a while to tweak it and get it right, and to work with the molds to get a good pressing and find a bandage that would work, to get it to age and look decent at the same time.”

“It’s an English-style cheddar,” Brennenstuhl said. “The cheddar in the U.S. tends to be sharper in flavor when it ages. The way we make this cheese, even with two years of age, it will develop a different flavor, but it will always be smooth and sweet and creamy.”

“A lot of our cheeses are made for the long haul,” Jim added. “They’re not going to fall off, they’re just going to get better. Quality milk is there and we make it in such a fashion that we don’t rush it.”

“We can tell you exactly the farm the milk came from,” Brennenstuhl said.

“We pay a premium for our milk,” Brennenstuhl said. “It’s arguably the highest quality milk that can be produced. If you don’t have good milk to put into the conversion, you’re not going to get a good product.”

“That’s where it shows, with a mild cheese like this,” Jim said, referring to the Top Hat Cheddar. “There’s not a lot to make it distinct but milk quality. That’s when it really shines.”

The Top Hat Cheddar is wrapped in a white linen cloth bandage to open air-age in the temperature- and humidity-controlled aging cavements in the basement of the building.

“A lot of bandaged cheddars, after a week or whatever will be dipped into wax, sealing everything in so there is no environmental influence,” Brennenstuhl said.

“I guess if there was one secret, this was a natural rind category. There will be some mold that grows on the rind,” Brennenstuhl said. “But our affineur (the person who oversees the aging of cheese) downstairs will wipe off that mold with a saltwater brine and then let it dry. Then we coat it with plastic coating. It kind of looks like wax, but it’s breathable. This type of product is commonly used in gouda and edam cheeses. This is something new. You won’t see a bandaged aged cheddar that has plastic coating on it. That’s something we came up with.”

“That surface takes on its own characteristics,” Jim added.

Brennenstuhl is also proud of his Valmy cheese, a gouda-style cheese that is cave-aged for two months, and then it is washed in a Belgian double chocolate stout every third day for a month, and then aged another two months.

“It gets a beautiful brown rind and a nice fermented chocolatey taste that goes into the cheese,” he said.

He also wished a new cheese called Rosette would have been ready for this year’s competition.

“I can swear that cheese would have taken an award,” Brennenstuhl said. “It’s an asiago with a sardo shape, a cute little seven-pound round beer keg. We soak it in an Italian red wine for a week. It’s the most beautiful looking cheese and that wine really does a number on the cheese.”

Here are other area winners from the World Cheese Championship: