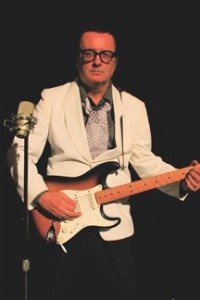 Award winning tribute king Mark Shurilla will be bringing his all star tribute “The Day The Music Died” to the Door Community Auditorium on July 16 at 8 pm. This is a tribute concert to the Winter Dance Party of 1959, which featured Buddy Holly, Ritchie Valens, the Big Bopper and Dion and the Belmonts.

Feb. 3, 1959 has gone down in history as “The Day The Music Died,” referring to the song made famous by Don McLean, “American Pie,” a 1971 hit about delivering the news of the deaths of the “3 stars” on his paper route.

Mark Shurilla and his band, The Greatest Hits, have been faithfully recreating the music of Holly and the other artists for over 25 years. The band is being joined by spectacular tribute artists Liam Ford as Johnny Cash, John van Thiel as Elvis, Danny J., “the Pavarotti of Rock” and teen age sensation, Jayne Taylor.

Tickets are available for $28 and $25. For more information or to purchase tickets visit the Door Community Auditorium box office at 3926 Highway 42 in Fish Creek, call 920.868.2728 or visit http://www.dcauditorium.org.